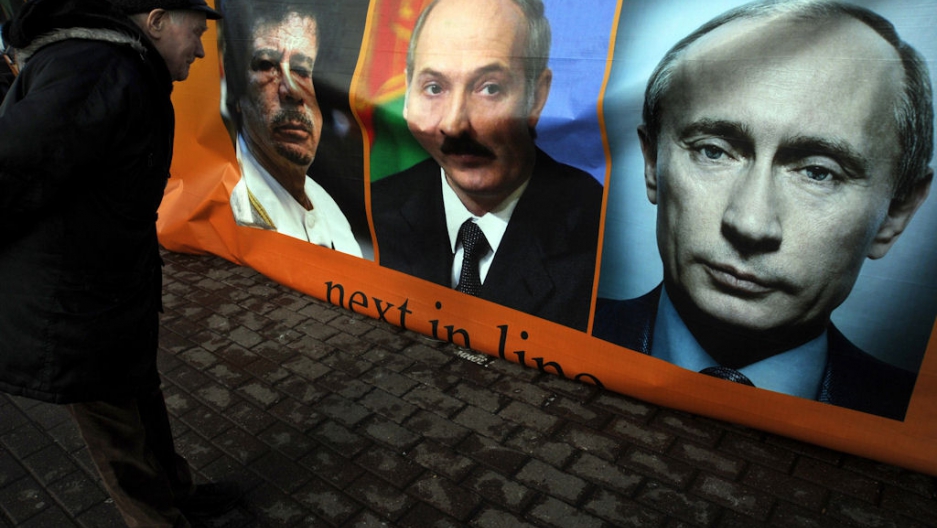 A man looks at a banner with portraits of (left to right) Libyan leader Muammar Gaddafi, Belarus President Alexander Lukashenko, Russian Prime Minister Putin and a sign reading "Next in line" during an authorized opposition rally at Pushkinskaya Square in Moscow on March 13, 2011.
Credit: Andrey Smirnov
Share

Russia's Prime Minister Vladimir Putin said in a lengthy interview Tuesday that, in essence, he rocks.

Putin said in a taped interviewed aired by Russia's three national television channels that he is the nation's hardest working leader since World War II, the Associated Press reports.

"I can't recall Soviet leadership after World War II who worked as hard," he said. "They did not know what to do because of their physical capabilities or misunderstandings."

The interview was Putin's first lengthy once since he announced he will return to the presidency in 2012. Putin said last month that he will run for presidency again in March, taking the role back from President Dmitry Medvedev.

Putin was previously president from 2000 to 2008, but was barred by Russia's constitution from a third successive term in office. He was replaced by Medvedev, but is still considered to wield more power.

AP states that the speech was a particularly strong instance of Putin's bravado:

The nationally televised display of bravado was remarkable even for a man known for his extreme self-confidence, obsession with his public image and virtually unquestioned control over Russia's most important institutions.

CNN reports that Putin also used the speech to express his goal of stabilizing and diversifying the national economy as well as strengthening the political system and democratic institutions.