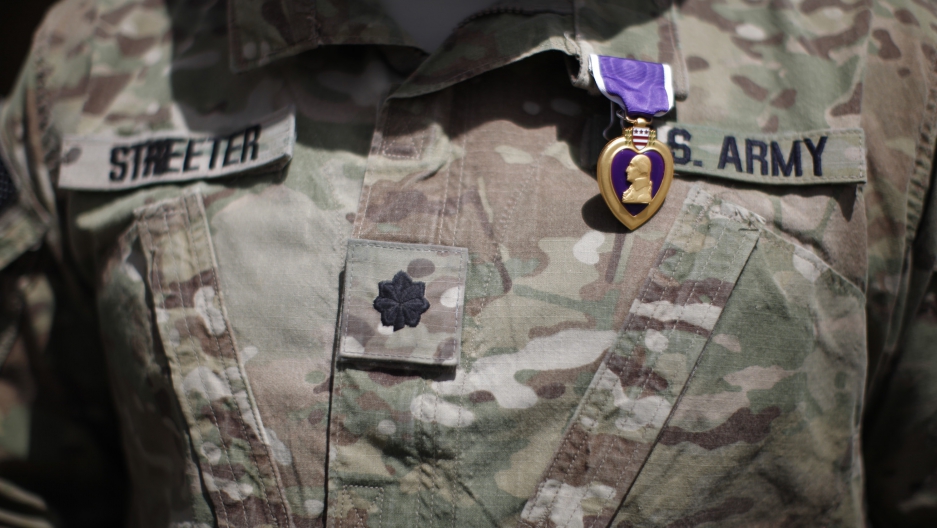 A Purple Heart medal is shown on the uniform of U.S Army Lt. Colonel Alan Streeter after U.S. Secretary of Defense Robert Gates presented the award for wounds he received in combat on May 30, 2011, during a ceremony on June 6, 2011, at Combat Outpost Andar in Ghazni Province, Afghanistan. The Stolen Valor Act aims to stop people lying about having received military medals like the Purple Heart.
Credit: Jason Reed/Pool
Share

The Supreme Court will rule on whether the Stolen Valor Act is unconstitutional, the court announced Monday. The law makes lying about receiving a Medal of Honor, a Silver Star, Purple Heart or other military medal a federal crime, The Associated Press reports.

The San Francisco-based 9th U.S. Circuit Court of Appeals struck down the law last year, 2-1, claiming that it wasn’t government’s job to punish lies that cause no direct harm, the Los Angeles Times reports.

According to Wired News, the appeals court said in its decision that, if it upheld the Stolen Valor Act, “then there would be no constitutional bar to criminalizing lying about one’s height, weight, age, or financial status on Match.com or Facebook, or falsely representing to one’s mother that one does not smoke, drink alcoholic beverages, is a virgin, or has not exceeded the speed limit while driving on the freeway.”

The Associated Press reports that the law has resulted in convictions in the past, and almost all of those have led to a sentencing involving community service.

Xavier Alvarez of Pomona, Calif., pled guilty to lying about having a Congressional Medal of Honor at a public meeting; he did that so he could challenge the law's constitutionality in his appeal, the AP reports. He was fined $5,000 and ordered to do 400 hours of community service at a veterans' hospital.

The Obama administration says the law "serves a crucial purpose in safeguarding the military honors system,” the AP reports.

The court plans to hear the case of United States vs. Alvarez in early 2012 and rule by summer, the L.A. Times reports.

EDITOR'S NOTE: This breaking news story has been updated to reflect the fact that the Stolen Valor Act has resulted in convictions in the past.