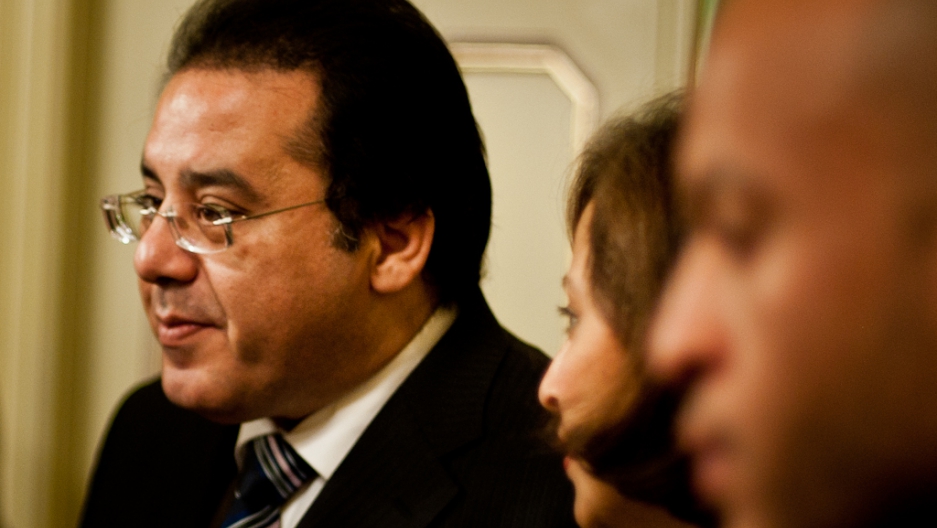 Dr. Ayman Nour speaks to journalists in Cairo after his conviction was upheld by an Egypt court.
Credit: Ben Brody
Share

In his first public appearance since a Cairo court upheld his 2005 forgery conviction, Egyptian opposition figure Ayman Nour warned that Egypt’s revolution is dangerously close to unraveling into a military coup.

Speaking to a small group of GlobalPost/Open Hands Initiative reporting fellows, Nour said the “dream of a civil state” is slipping away as the military tightens its grip on the country.

“We ousted a military ruler to go to a military council,” Nour said. He emphasized that he still considers himself a presidential candidate, despite the fact that Egyptian law now bars him from running.

"Nothing has changed," he said. "We have been working very hard and we will continue to do so."

Nour was jailed in 2005 on charges widely believed to have been concocted by a regime intent on silencing opposition.

He was released four years later, with the government citing concerns about Nour's health. On Sunday, a court rejected his appeal, at least temporarily barring him from running for the country’s highest office.

Hours before holding an official press conference, Nour told the GlobalPost gathering that the country’s military leaders, who have ruled the Arab world’s most populous nation since former President Hosni Mubarak stepped down, have employed many of the old regime’s tactics to consolidate their power.

They have played on sectarian fears, he said, “exaggerating the role of the Muslim Brotherhood so that Christians would be fearful.”

The ruling council has also demanded that it be written into the constitution that all laws affecting the military be approved by the military, Nour said, and has refused to make any budget details public.

“When I read both (constitutional) articles, I felt that I wanted to join the group ‘Sorry Mubarak, I want you back,’” Nour said.

“We are very disappointed in the court’s decision,” she said.

Nour said that he had also expected a different outcome.

“I thought that there was a revolution that had happened in Egypt,” he said. The presidential election is expected to take place in 2013, leaving the door open for an official pardon in time for Nour to run.

Editor's note: This story has been updated to reflect Nour's assertion that he still considers himself a presidential candidate and the real possibility that he will be reinstated as one before 2013.