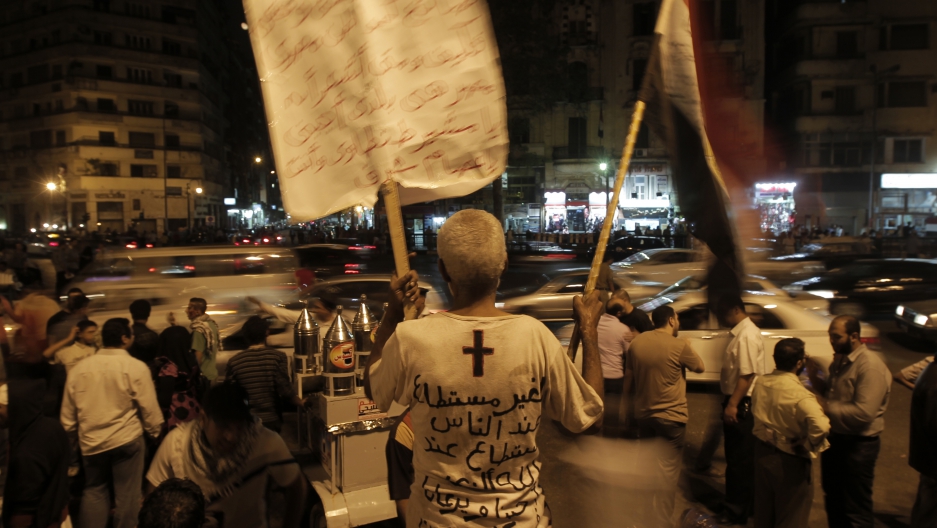 Nearly 3,000 Egyptian mourners gather in in Cairo's Tahrir Square on October 15, 2011 for a candlelight vigil in honor of Coptic Christians among 27 people killed during a demonstration over an attack on a church. Egypt's ruling military approved on October 15 a law to punish discrimination.
Credit: Mahmud Hams
Share

CAIRO — On the first Sunday after a military crackdown on a protest against the burning of a Christian community center killed 27 people last week, Coptic Christians are gathering to pray for the dead and the country seems increasingly united in a belief that the Egyptian Army is not the steward of the revolution that so many once hoped it would be.

The killing occurred last Sunday outside the Egyptian state television after eyewitnesses and Human Rights Watch claim the military used excessive force against a demonstration by Copts over what they see as the failure of authorities to investigate the burning of the Christian center, which was reportedly set to be converted to a church, in Upper Egypt last month.

It was the most violent turmoil since the "January 25 Revolution" that ousted President Hosni Mubarak after three decades of authoritarian rule in a police state.

While the military has offered few details in the case, 27 mostly Christian demonstrators were killed and 300 others were injured.

Heba Morayef, a Cairo-based Human Rights Watch researcher told GlobalPost / Open Hands Initiative reporting fellows on Saturday that autopsy reports confirm as many as 18 people died as a result of gunfire at Maspero while others were crushed to death by armored personnel carriers.

“The military is an equal opportunity oppressor,” Shadi Hamid, Director of Research at Brookings Doha Center told GlobalPost fellows on Saturday. “The media has emphasized sectarianism and that was not the case, it was a clear-cut clash between the army and civilians.”

Hamid stressed that the military has played on sectarian fears, while state-owned television used sectarian undertones making it seem that Coptic protesters were attacking the army.

About 500 protesters had initially gathered at Maspero, as the television building is known, that evening, holding signs reading: “Muslims and Christians are one hand, Down With Military Rule, and Down with [Supreme Council of the Armed Forces Chairman Mohamed Hussein] Tantawy.”

On Wednesday the Supreme Council of Armed Forces (SCAF) held a press conference to discuss the events, denying any wrongdoing and stating that the army would “never fire” on civilians.

General Ismail Etman stressed that Maspero is a state institution, which is to be protected under any circumstances using any measures.

Despite calls for an independent fact-finding mission to assess what happened that night in Maspero, the military has taken over the investigation.

On Sunday, the events escalated quickly and dramatically.

“The army is opening fire on its own people,” said Maryam Tawfik, a Coptic Christian at the Maspero protest as she ran from the violence, gasping for breath. “They started shooting at us like we were birds, sparing no one.”

Coptic Christians were there demanding equal rights as Egyptian citizens. They wanted the right to build houses of worship without being threatened. They called for the state to hear their legitimate concerns. Most of all, they wanted the violence against their churches to end.

The protesters were mainly families who had brought their children and grandchildren to take part in freedom of expression. They were unarmed citizens.

“This is our country and we are here today to send a message of peace, unity, we don’t anyone to hate us,” said a young Christian protester Sarah Nader.

The protest was filled with youth activists, who were waiting for marchers to arrive from the Cairo’s downtown Shubra district.

Most managed to arrive safely, while some were slightly scratched up and wounded after being attacked by unidentified rock-throwers along the way.

As soon as they arrived, the crowd at Maspero cheered.

Before the two streams of protesters could join together, the roaring sound of back-to-back machine guns took over drowning out the voice of the crowds.

The army opened fire, first in the air, causing several hundred protesters to run for cover, almost trampling one another. The military fired live rounds, according to Human Rights Watch which cited the results of autopsies.

Women and men who were clinging on to their families and together they were running behind me. Someone screamed, “Run, keep running, don’t stop!”

Managing to make it to the outskirts and out of the line of fire by the military, I watched protesters who escaped after me crying, screaming. Some families hugged each other.

Among the crowd, a middle-aged Christian woman wearing a golden cross on her chest caught my attention. When she saw the scene, she grabbed the face of her husband, weeping, and said: “We have to pray, we have to pray!”

One protester beside me noticed a middle-aged man who was about to head towards to the protest, holding his cross in one hand and his 10-year old daughter’s in the other.

The protester advised the man not to go any further with his young daughter because the army was firing at random and also running over civilians in order to disperse gathering.

The man clung on to his daughter’s hand, moved towards the protest despite other people’s warnings and yelled: “Till when are we going to be afraid to stand up for our rights? Enough is enough!”

In the midst of the violence, state-owned TV news channels had also urged “honorable” civilians at home to leave their home and take to the streets to protect the army from protesters, who were attacking the army.

“This is an Egyptian cause, this is not just a Coptic cause,” AbdelTawab Hassan, a young activist at Maspero said. “If one of us loses his rights, then we all lose.”

“The regime takes advantage of minorities, and they especially crack down violently when there are fewer protesters,” he added. “ We can’t let them that do that, we have to remain united.”

Late last month, an old community center allegedly being transformed into a church by Christian citizens in the Edfu in the Upper Egypt governorate of Aswan, was demolished by local Muslim residents.

While licenses are sometimes difficult to obtain, permission from provincial governors is needed to build houses of worship in Egypt. The governor, however, supported the move because the church builders lacked a license and the building was ancient.

Attacks on churches have been increasing over the past months, causing many Coptic citizens, who make up as many as 10 percent of Egypt’s 85 million, feel vulnerable, like “second-class” citizens unable to demand their rights.

Many Egyptians feel that such attacks were orchestrated by remnants of the old regime as well as the ruling military council, who want to create sectarian strife between Egyptians in order to “divide and conquer.”

“We know that Mubarak’s regime used the same methods to keep us down as a minority and also divide us as Muslim and Christian Egyptians,” Tawfik said.

“After the revolution, we managed to remove Mubarak and replace him with Tantawy, who uses the same techniques, if not worse, to keep us down,” she added.