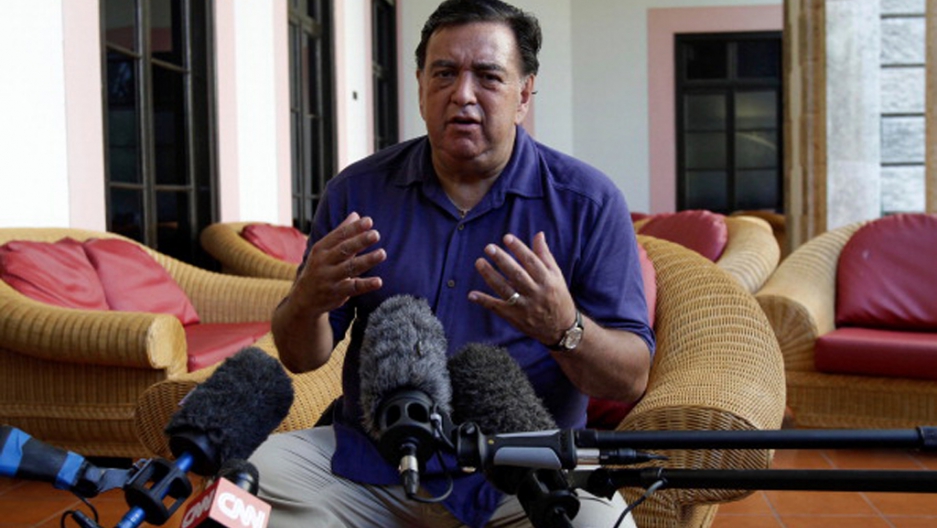 Bill Richardson, the former governor of New Mexico, was unsuccessful in his attempts to negotiate Alan Gross' release from a Cuban jail. He is shown here giving a press conference on September 9, 2011, at the Hotel Nacional in Havana.
Credit: Adalberto Roque
Share

HAVANA, Cuba — If the Israeli government is willing to trade more than 1,000 Palestinian prisoners for a single soldier, Gilad Shalit, would the U.S. give up a few Cubans for jailed American Alan Gross?

Like the deal for Shalit, it probably wouldn’t be an even swap. But it might be possible — if only U.S.-Cuba relations could improve to the level of Israeli-Palestinian ones.

Shalit, the Israeli soldier, was 19 years old when he was taken captive by Palestinian militants in 2006. His plight became such a cause celebre that the cabinet of Prime Minister Benjamin Netanyahu voted 26 to 3 this week to approve the lopsided deal with Hamas for Shalit’s release, even though the Palestinians at the other end of the bargain are tied to the deaths of hundreds of Israelis.

A U.S.-Cuba prisoner exchange, by comparison, shouldn’t be so hard — more a matter of pride and politics than national security. And Gross’s ongoing imprisonment is often cited as the single greatest obstacle to improved relations between Washington and Havana.

The subcontractor for the U.S. Agency for International Development (USAID) was arrested in Havana in December 2009 while trying to set up satellite equipment that would let Cubans connect to the internet without going through state-controlled servers, illegal under Cuban law.

Gross, a 62-year-old Maryland resident, was convicted of attempting to undermine the “integrity and independence” of the Cuban state, which has enacted specific laws to punish anyone participating in USAID programs or other American-funded efforts that openly aim to subvert the Castro government. The Cuban judges sentenced him to 15 years.

Since then Gross has been locked up in a military hospital. His family’s sufferings (both his mother and daughter have cancer) and a parade of U.S. celebrities and Cuba sympathizers have failed to persuade Raul Castro to let Gross go on humanitarian grounds.

The most recent to fail was former New Mexico governor and global troubleshooter Bill Richardson, who appeared to burn his Havana bridges last month after flying in for what he thought would be negotiations to win Gross’s release, only to be coldly rebuffed by Cuban officials. Lashing out, he called Gross a “hostage” of the Castro government.

Cuban officials have made it clear they want to swap Gross for some of the so-called Cuban Five, a group of intelligence agents sent to infiltrate militant Cuban exile groups in Miami in the 1990s. Since the spies’ arrest in 1998, Havana has mounted a relentless global campaign to free them, hailing the men as anti-terrorist heroes whose long federal prison sentences are a cruel injustice.

But Washington has adamantly rejected comparisons between Gross and the Five, insisting that the spies are serious criminals, while Gross is a hapless development worker who was simply trying to give better internet access to the island’s small Jewish community. Any attempts to equate them are deeply flawed, they have insisted.

More from GlobalPost: Oil discovery in Cuba gets US notice

That position now appears to be softening.

One of the Five, Rene Gonzalez, completed his prison sentence on Oct. 7, and the Associated Press reported Friday that the U.S. offered to wave Gonzalez’s three-year probation in exchange for Gross’ release. Cuba rejected the deal, noting that Gonzalez had already served a 13-year sentence, while Gross is at the beginning of his 15-year term.

But at least the two sides are starting to negotiate.

Raul Castro appears to be holding out for a better offer. He knows from experience that the American prisoner is a valuable bargaining chip. As a young rebel commander during the Cuban Revolution, he temporarily kidnapped more than two dozen U.S. sailors and Marines in 1958 to help shield his forces from aerial bombardment.

It’s not clear how far the U.S. would go to sweeten the deal. The Five have already done long stints in prison, but their early release would infuriate anti-Castro Cuban-American lawmakers and sectors of the Cuban-American community.

One of the Five, Gerardo Hernandez, is serving two life terms, and the possibility of his release seems especially remote. As the leader of the spy ring, he was convicted of conspiracy to murder for providing Havana with information that led to the 1996 downing of two civilian aircrafts over the Florida Straits by Cuban military jets, killing four.

The other three members of the ring still have several more years in prison, and Cuba may be angling to get some or all of them back. U.S. officials say pardons are not on the table.

“The so-called Cuban Five were tried and convicted in U.S. Federal Court and are not political prisoners,” State Department spokesperson William Ostick told reporters earlier this month, rejecting comparisons of Gross’ imprisonment to the Five.

And yet, for many, the American’s predicament has been linked to the Five from the outset — even by Gross himself. According to a leaked 2009 U.S. diplomatic cable written soon after Gross was arrested, he asked his Cuban interrogators early on “if his case might be compared in any way to that of the Cuban Five.”