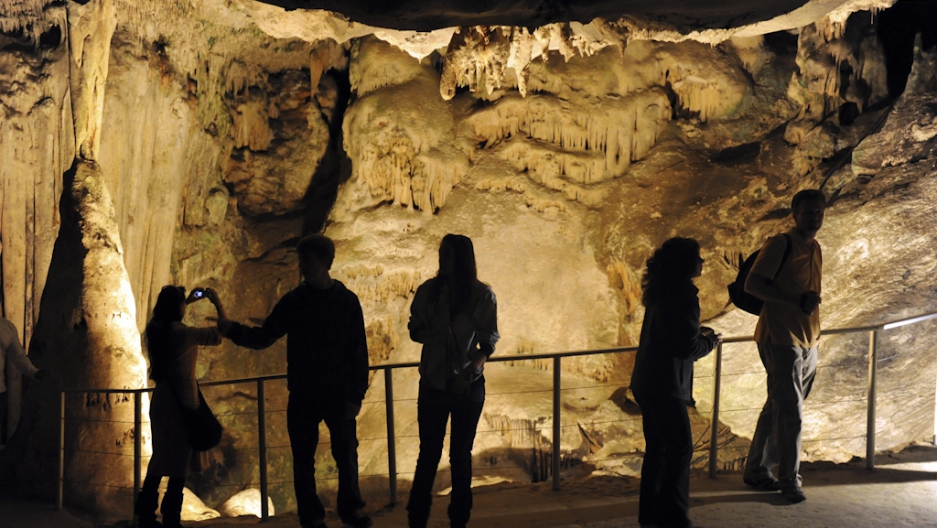 Visitors look at stalactites at the Cango Caves in Oudtshoorn, north of the South African city of George. Researchers have discovered what they believe may be the remnants of an ancient art studio, at Blombos Cave on South Africa's southern Cape Coast.
Credit: TOSHIFUMI KITAMURA
Share

The discovery of ancient paint supplies, dating back to 100,000 years ago, is evidence of the oldest known art production workshop, according to a study published in the journal Science.

"The conceptual ability to source, combine and store substances that enhance technology or social practices represents a benchmark in the evolution of complex human cognition," the researchers wrote.

"The application of the mixture is unknown, but possibilities include decoration and skin protection."

Blombos Cave is a famous archeological site dating to the African Middle Stone Age, with the earliest findings said to be from 140,000 years ago. Scientists have found a diverse range of artifacts at the limestone cave, from 70,000-year-old pieces of ochre to beads and bone tools.

National Geographic News reports that prior to the discovery of the ancient "art studio," the earliest known ochre production workshop was 60,000 years old.

"This is significant because it is pushing back the boundaries of our understanding of when Homo sapiens — people like us — first became modern," Professor Christopher Henshilwood from Johannesburg's University of the Witwatersrand told BBC News.

"These finds indicate that humans were certainly thinking in a modern way, in a way that is cognitively advanced, at least 100,000 years ago," he said.