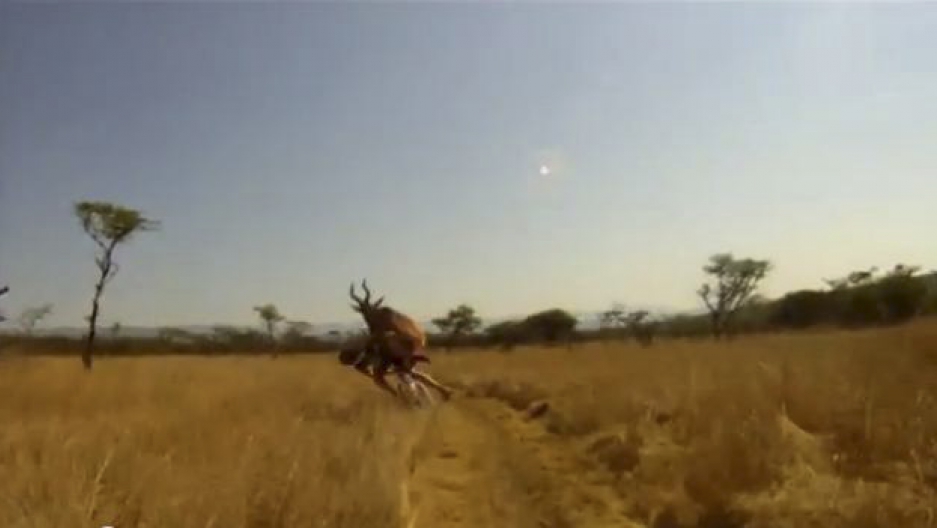 A South African mountain biker is T-boned by an antelope, identified as a Red Hartebeest, during a race in KwaZulu-Natal province, in this still from a YouTube video.
Share

JOHANNESBURG, South Africa — A video showing a South African mountain biker getting hit by an antelope has gone viral on YouTube.

Described as an "only in Africa" situation, a 17-year-old mountain biker named Evan van der Spuy, of Team Jeep South Africa, is T-boned by the antelope during a race through the savannah of KwaZulu-Natal province.

"Watch the buck!" says Travis Walker, the mountain biker in back who is filming the race from a video camera mounted on his bike, before crying out a moment later: "Holy cow!"

The animal is identified as a Red Hartebeest, a large antelope found in southern Africa that can weigh up to 330 pounds.

In the video, the buck takes out the mountain biker, and then continues running off into the savannah, through the acacia trees.

The mountain bikers appear to have been treading on the animal's territory, with the race taking place within a nature reserve at Albert Falls Dam. Van der Spuy had been in second place in the race when the buck took him down.

Despite the shocking collision between mountain biker and buck, both van der Spuy and the Red Hartebeest appear to emerge relatively intact.

At the end of the video, van der Spuy's helmet is shown to be damaged from the impact, with a warning to all mountain bikers in Africa: "This is why you wear a helmet!"

More from GlobalPost: South Africa to hunt "247,000 most wanted" with billboards

Van der Spuy later tweeted that he went to hospital to be treated for a stiff neck, but was otherwise unharmed. He credited his bike helmet for saving him.

"Just saw the footage that put me in hospital with a very stiff neck take my hat off 2 @traviswalkermtb you got some good camera skills man," he wrote at @evanvdspuy.

Van der Spuy told a local newspaper that he doesn't remember much of the crash.

“I saw it coming from about 100 meters away … I looked at it and think I pointed at it and from there it was a blur. I just remember lying on the floor when I came to,” van der Spuy told The Witness, a newspaper from the nearby city of Pietermaritzburg.

“It could have been fatal, so it just reaffirms how crucial it is to wear a helmet at all times," he said.