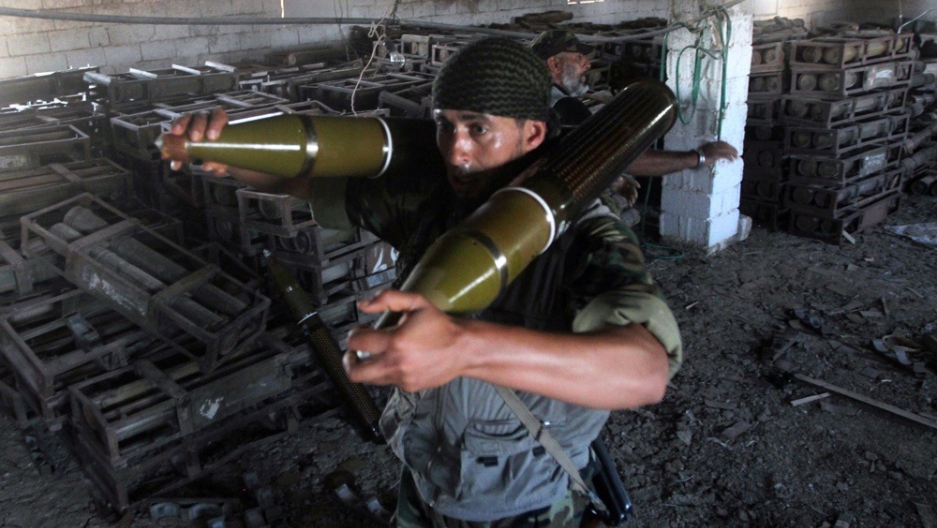 A Libyan fighter carries ammunition on the outskirts of Sirte on Oct. 4, 2011.
Credit: Ahmad Al-Rubaye
Share

JERUSALEM — Israel’s military intelligence is increasingly concerned about the quantity of Libyan arms flowing into the Gaza strip through its increasingly volatile southern border.

Egypt has a northwestern border point with Israel, at the top of the Sinai desert, and a long eastern boundary with Libya. The fall of Muammar Gaddafi's Tripoli represents a new source for weaponry, and has opened up a new land route, enabling smugglers to bring “thousands” of weapons into Gaza by way of tunnels that run from Rafah, in northern Egypt, into the Hamas-run territory, according to numerous Israeli military sources.

Before the influx of Libyan contraband, Israeli assessments have been that most of the weapons coming into Gaza, albeit also illegally, have been from Iran, transported by ships crossing the Mediterranean Sea or over land via Sudan.

A September report by Israeli military intelligence, widely quoted in public, stated that the weapons smuggled in from Libya constitute an increase in Gaza stockpiles, but not necessarily a qualitative enhancement of Hamas’s military capacities. Mostly, SA-7 anti-aircraft missiles and rocket-propelled grenades (RPGs) have been detected.

The Soviet-era SA-7 is a shoulder-fired, heat-seeking missile that Israel says has already infiltrated Gaza. Rocket-propelled grenades, designed to penetrate armor, are also fairly common in the strip. While Libya is known to possess a stockpile of antiquated chemical weapons, Israeli officials say there is no indication Hamas has been seeking them out.

Victoria Nuland, a spokesperson for the U.S. State Department, said at a briefing Friday in Washington that the United States was actively scouring Libya in search of conventional weapons that may have gone missing since the conflict in Libya began earlier this year.

“The Libyans have asked for our help, and we have increased our support apace,” Nuland told reporters.

Several hoards of weaponry incoming from Libya were caught and confiscated during the late summer and early fall by Egyptian police operating near the Libyan border.

The Sinai has increasingly acquired the feel of an untamed no man’s land. With Egyptian military and police personnel occupied keeping the peace in Cairo and other urban centers, and with the military government apparently distancing itself from promises of democratic reform, it is unclear who rules the desert.

A fringe group of extremists calling itself “Al Qaeda of Sinai” has taken control of growing stretches of the peninsula and appears to be attempting to cement ties to the Bedouin tribes that reside there.

For love of guns: Mass proliferation of small arms worries authorities in Libya

Egyptian-Israeli relations have become severely strained since the fall of President Hosni Mubarak last February, and despite the grave concern both governments express at the influx of arms, these apprehensions have not brought about renewed cooperation.

Late last month, Egyptian authorities briefly closed the Rafah border crossing without consulting their Israel counterparts after another, larger than usual, cache of Libyan arms was detected on its way into Gaza.

Speaking on Army Radio, Gen. (Ret.) Shlomo Gazit, a former head of military intelligence who was privy to the intelligence report, brought up the inflow of weapons from Libya as a primary reason for the urgency of establishing a new base for Israeli-Egyptian relations.

“It is another reason Israel has to get itself back on track with its neighbors. I just read the study about Libyan weapons coming into Gaza, and it’s not clear we know who we can even talk to about this right now,” he said.

Israel’s ambassador to Egypt, Yitzhak Levanon, has not returned to Cairo since being evacuated when the Israeli embassy was attacked and invaded by a mob three weeks ago, and with the sharp deterioration in bilateral military contacts, it is not evident who the counterparts for pressing diplomatic consultations would be.

There is some concern in Israel that the new weapons may increase the range of missiles that Hamas or splinter groups have access to, possibly even allowing for attacks against the two main population centers of Tel Aviv and Jerusalem.

The menace posed by Libyan arms is another in a growing heap of challenges awaiting the government of Israeli Prime Minister Benjamin Netanyahu as he embarks upon the new year of the Jewish calendar.

The threats are not all external. As the nation hunkered down for the Day of Atonement, Israel Police announced the arrest of a man, aged 18, who is accused of setting a mosque in the Galilee town of Tuba Zangaria on fire last week.

There were major concerns that the Bedouin residents of the village, which, located within the Green Line, are Israeli citizens, would take to the streets in anger. The day after the mosque burning youngsters set a municipal building on fire.

In an attempt to prevent an uprising or further loss of control, Israeli President Shimon Peres visited the town to express his solidarity, accompanied by Chief Rabbi Yona Metzger.