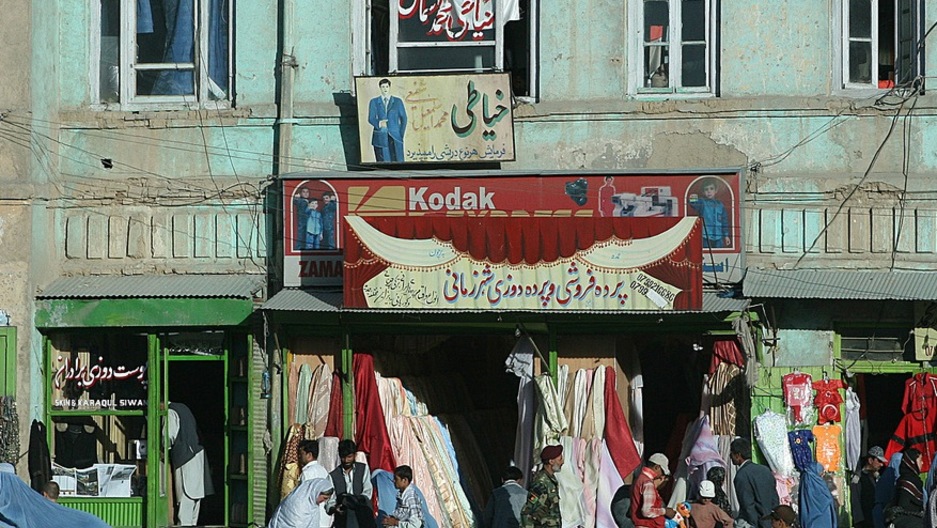 Behind the security gates lie the secrets to living safely and living well in Afghanistan. I've come for a tour of a house, a mansion really, that is sitting empty.

"And it's ready for rent and everything is clean and clear and recently painted," said Mohammed Daoud Rahimi, a real estate agent. He eagerly showed the features of the five story, seven bedroom home.

"It has the central heater and also the cooling system." The main salon also has a series of crystal chandeliers.

There is a jacuzzi tub downstairs and rows of roomy closets.

The influx of cash that accompanied foreign aid agencies, diplomats and private security firms led to a big building boom in Afghanistan, especially in the cities. In 2009 alone, house prices jumped 75 percent, but it seems the good times may be coming to an end.

A conference focused on rebuilding Kabul was held in the splendor of the spectacular Babur Gardens southwest of the old city last week. It seemed a world away from the bleak reality of life for most Afghans. But it was where the mayor of Kabul was seeking fresh ideas and money to salvage his city.

Muhammad Younus Nawandish invited me to have lunch with him on the terrace of the garden. As waiters rushed to pile platters of mutton, beef, chicken and rice on the table, Nawandish swept his hand up toward the mountainside, toward hundreds of ramshackle homes.

"All these houses you can see, this is illegal. Seventy percent of the houses are unplanned and most of them are illegally. Because this is a big challenge for Kabul municipality," he said.

It is an enormous challenge, caused partly by rising house prices and partly by the rising population. Kabul has grown from 1.5 million to 5 million residents over the last several years without any formal planning, as frightened Afghans piled into the city from rural areas. As rents climbed, people simply moved further out and built wherever they could.

Nawandish is keenly aware of the problems facing the community and also of the city's dependence on foreign money to keep it going.

"This is very important for Kabul and Kabul economy to have the assistance of the international community. Now we have assistance from the World Bank, the United States, Turkish government, Japanese government, United Arab Emirates and other countries."

It adds up to billions of dollars. The United States alone spends about $320 million a month in non-military aid across the country. Plucking grapes from a plate in front of him, Nawandish laments the end of such largesse, even as he promises he will find another way.

Income may well mean higher taxes on residents and businesses in one of the few places in Afghanistan where it is safe enough to even try to collect them and that makes life even harder for local businesses.

Hajji Hameed is quick to serve the lone customer buying some gum in his store. For nearly 50 years, Hameed has run the Chelsea supermarket in downtown Kabul. It was established 20 years before that by his father.

Meant to cater to the tastes of foreigners living in the city, the store also attracted locals with three floors of food, clothes and hardware, but Hameed has watched business slide.

"The main problem here is security, the security situation is very bad," said Hameed. "We do not have customers for months if there's a bombing in Kabul."

For him, it is all made worse by the rising costs that accompanied the foreign community driven boom of the last decade.

"The rent has gone up a lot recently even though the economy and the security situation is getting worse every day. In order to pay the rent, taxes and utility bills, I've had to get a loan and spend my savings."

Add to that the unique and dramatic problems facing entrepreneurs here. Hameed has done well over the years, opening other stores, buying property. That made him a target. Two years ago, he was kidnapped.

The men who grabbed him one night as he made his way home from work demanded the equivalent of $700,000.

"I sold two houses and I borrowed $200,000 from the bank. I was held for 19 days and nights and they only released me after they received the ransom," says Hameed.

Now, he has hired bodyguards to protect him and he closes the store early. He says it all makes it harder to pay back his growing debts. Hameed's difficulties highlight the critical link between security and the economy – and the need for both to ensure Afghanistan's future.

The only other viable parts of Afghanistan's economy are illicit – drugs and smuggling. Earlier this year, the US Senate Foreign Relations committee warned that the country could suffer a severe economic depression when the majority of foreign troops leave in 2014.

That worries many Afghans who have never been able to build a sustainable economy and a peaceful existence.