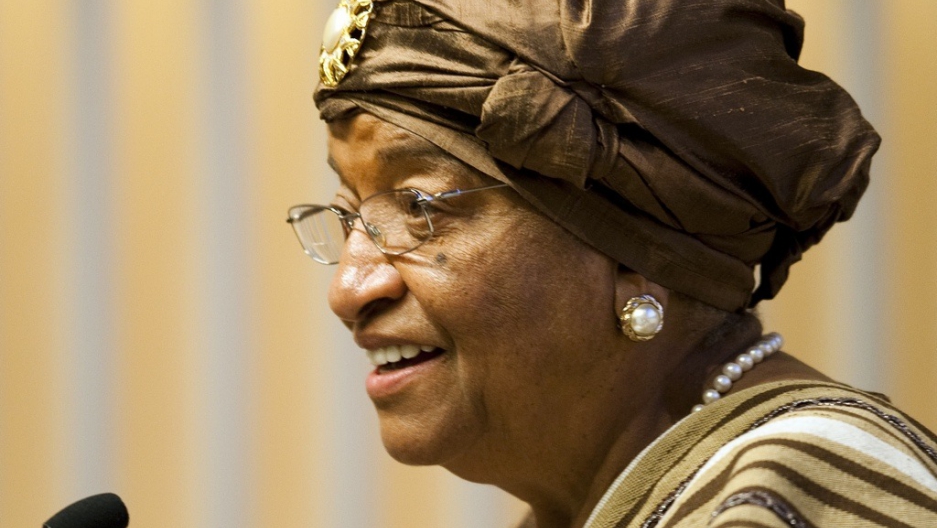 Liberian President Ellen Johnson Sirleaf is running for a second term in the Oct. 11 election in which she faces 15 challengers.
Credit: Jim Watson
Share

Singing “Ellen’s got the Mansion Key” to cheering supporters, Johnson Sirleaf appeared confident that she would win a second term as Liberia's president in Oct. 11 elections.

Johnson Sirleaf has reason to celebrate. She has won international acclaim as Africa’s first female president. And on Oct. 7, the Norwegian Nobel Committee granted her its most prestigious honor in recognition of her contribution to women's rights and democracy.

Yet this election may prove to be the race of her life. Johnson Sirleaf faces stiff competition from 15 other candidates in the poll, including former warlord Prince Johnson and international football star George Weah.

Opposition parties charge that her administration has been marred by corruption because she has not prosecuted members of her government accused of misusing public resources. Others allege that Johnson Sirleaf has not been effective in improving the lives of ordinary Liberians.

One of her major policy objectives as president has been poverty reduction, but a majority of Liberians continue to live at or below the international poverty line. Johnson Sirleaf says she inherited a broken country, destroyed by a 14-year-long bloodbath that killed 250,000 people. Economic development that reaches the grassroots takes time, she argues.

”It took us a while for us to open up the economy, for us to get the investments, because the government cannot employ everybody ... So we have to bring companies in here. Now we have done that, we are satisfied now that you go all over the country you see different companies are now operating; they’re starting to do their work, so we will be able now to create more jobs," said Johnson Sirleaf in a meeting with ex-combatants and deactivated Armed Forces of Liberia soldiers in September.

Her administration has attracted nearly $19 billion in foreign direct investment, but the developments in mining and agriculture are not employing enough of the young Liberians who missed out on education because of war. The IMF warns the country could experience economic "growth without development."

The president used her international fame and experience as a former Citigroup economist to convince the IMF and World Bank to waive $4.6 billion of the country's debt. But such fiscal accomplishments mean little to most Liberians. They want to see tangible improvements in their lives.

In Monrovia, new structures rise alongside the bullet-ridden, burned out buildings. The potholed streets have been paved over. But Dew Mayson, a one-time ally of Johnson Sirleaf now contending for the presidency on the ticket of the National Democratic Coalition, says the president has only achieved piecemeal infrastructure development.

“Her star status as the first female president of an African country has hoodwinked a considerable section of the international community into believing that the president is running a progressive regime,” Mayson told the Nigerian daily newspaper The Nation.

Johnson Sirleaf became a symbol of women's empowerment when she became Africa’s first female president. She has supported adult literacy programs for market women and created a special court to try rape cases. The government has instituted a free and compulsory primary education program, with mixed results.

"The first thing Ma Ellen did was to send me to next level school through Gender Ministry," says Mary Siah Varney, who sells dried meat in the Rally Time Market near central Monrovia, one of the markets renovated through the private Sirleaf Market Women Fund. "The ministry trained us to go to school and pay us on top of it. Ma Ellen open our eyes,” says Varney.

The rising price of commodities, including the Liberian staple, rice, has driven off some of Johnson Sirleaf's supporters in this busy market. Nevertheless, Varney says she is still going to cast her vote for Johnson Sirleaf to help her win a second term. “She did a lot of good things for us. She made us to know our right as a woman, so I am praying that she goes back in the chair for the second time."

But not everyone in Liberia agrees that she has lived up to expectations.

One of Johnson Sirleaf's critics is Mariah Faniah, who is operations manager of a shelter for abused women and girls, and the secretary general of the opposition Liberty Party. Women had great confidence that electing a female president would shine a light on the plight of women in Liberia's male-dominated society, she says. Instead, Johnson Sirleaf has not proved to be "gender sensitive."

"From the beginning, women felt that it was their time when President Sirleaf was elected but unfortunately what we expected from our leader leaves us to wonder if she is gender sensitive ... For me I would say, Madam Sirleaf has failed the Liberian people miserably. In the past, women were used to vote Ellen into power but now many are praise singers but they won't vote for Ellen this time."

Johnson Sirleaf, a Harvard-trained economist, boasts that her grandmother was one of Liberia's many market women. Sirleaf’s strongest challenger for the presidency is also Harvard-educated — Winston Tubman, a lawyer who previously served as the United Nations Secretary-General’s Special Representative to Somalia. He shares a ticket with soccer star Weah who came second to Sirleaf in the 2005 elections.

In his split-level home behind the boulevard named for his late uncle, the much reviled President William V.S. Tubman, Winston Tubman says he believes Johnson Sirleaf’s hands are stained through her involvement in the country’s ugly past. Johnson Sirleaf has admitted that she donated money to a fund supporting the National Patriotic Front of Liberia, former dictator Charles Taylor's war machine. Johnson Sirleaf later supported Taylor's ouster.

“If she admits what she had done, than she can agree, someone who has done this act, cannot unite the country and be someone who can heal the wounds of the country; therefore, she should step aside," says Tubman. "Our party brings together individuals who had no part in the war.”

Tubman and Weah had a huge rally in July when Weah returned from the U.S. with an online college degree from DeVry University. Weah told the crowds Johnson Sirleaf's Unity Party had rigged the 2005 elections, and Tubman said at subsequent rallies that the only way his party will lose is if the president cheats.

Prince Y. Johnson, years removed from his days as a rebel leader and head of the Independent National Patriotic Front of Liberia, has successfully transformed himself from a man of war to a lawmaker as a senior senator for Nimba County and seems to be a thorn in the flesh of the incumbent. Johnson is widely seen as strong enough to shake up the outcome of the presidential race in October partly due to his influence and stature in Nimba, his home county. He says Sirleaf does not deserve a second term.

“Nobody’s going to give her a second term because she’s not living up to her word. Nobody will trust her ... She has clothed herself with the corruption jacket to the extent that nobody is brought to book … So she has to go. If she doesn’t go, she is now seeing the writing on the wall, there is a national democratic conspiracy to vote her out," Johnson says.

Johnson Sirleaf and Sen. Johnson are among several Liberians recommended to be barred from politics by the country’s erstwhile Truth and Reconciliation Commission which heard testimonies from victims and perpetrators of the war.

Liberia is tense as the elections approach and Johnson Sirleaf has one plea: “When the elections are behind us, thank God, we all have a violence free, peaceful election for the people to really choose what they want. We are committed to that, we just want everybody to look at where we are and vote in accordance with your conscience and your God. That’s all we ask you to do … to give everybody the chance to exercise their choice and to do so in freedom in peace, in tranquility.”

Wade Williams is an editor at FrontPage Africa, Liberia’s most widely circulated newspaper. She is also a fellow of New Narratives, a mentorship program for independent media in Africa. Mae Azango is a writer for FrontPage and a New Narratives fellow.