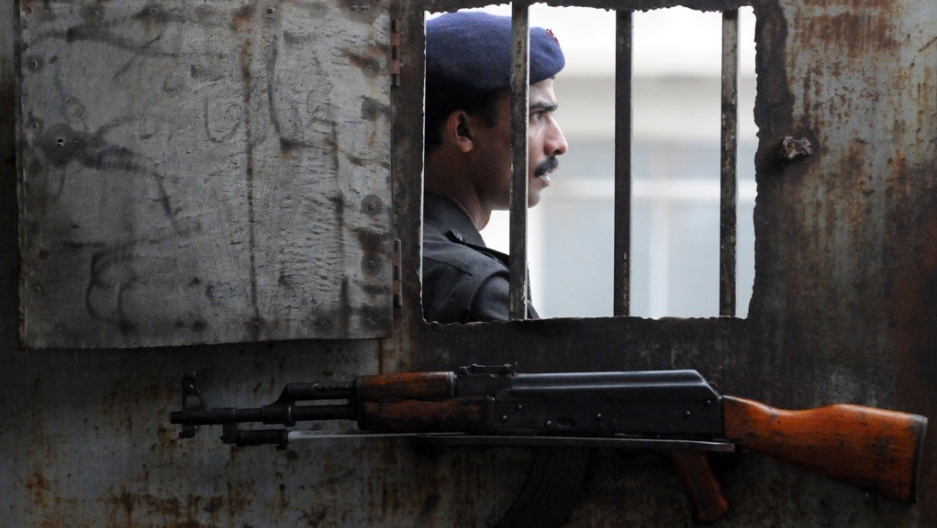 A Pakistani policeman stands at the gate of an anti-terrorism court in Karachi on Aug. 12, 2011.
Credit: Asif Hassan
Share

ISLAMABAD, Pakistan – Religious extremists staging attacks or targeted killings in Pakistan often get away with it. But, earlier this week, Malik Mumtaz Hussain Qadri, became an exception.

The personal bodyguard got the death sentence for killing Salman Taseer, an outspoken, liberal politician and the governor of Pakistan’s biggest province, Punjab. In broad daylight last January, Qadri pumped 27 bullets into the body of Governor Taseer, directly in front of a restaurant in an upscale neighborhood of Islamabad.

Qadri was angry at the governor’s efforts to amend the country's controversial blasphemy law, which is often misused to settle personal scores. The governor's supported of a Christian mother who had been sentenced to death for blasphemy didn't help his popularity.

Despite witnesses and Qadri’s own confession, the court needed eight months to award the sentence. The case was delayed because several prosecutors refused to take Qadri’s case. A number of lawyer associations and religious groups supported the killer because in their eyes he defended Islam.
Qadri was given one week to appeal.

Video: Rehab for the Taliban

At best, according to the International Crisis Group, just 5 to 10 percent of all suspects, including those in terrorism cases, are convicted by Pakistani courts. The reasons are varied — corruption of officials investigating or trying a case, witnesses refuse to testify or suddenly withdraw their testimony, evidence gathering is flawed and further complicated by intelligence agencies that often illegally detain suspects before handing them over to the police, are a few examples.

The Anti-Terrorism courts in Pakistan fare a little bit better with a 25 percent conviction rate, according to a U.S. State Department report from 2010.

“In Pakistan the accused is the favorite child of the law,” said Syed Mohammad Tayyab, a prosecutor in Islamabad, with no sense of irony.

Tayyab prosecuted high-profile terrorism cases such as the Marriott bombing in 2008, which killed at least 53 people and injured hundreds. He also fought cases against militants involved in suicide attacks on a police station and a paramilitary checkpoint, both in Islamabad, that killed nine and injured several others in 2009. All accused in these cases were acquitted. The cases are under appeal.

Poorly handled police investigations are the primary cause of the acquittals, Tayyab said. According to the Crisis Group, police rarely rely on scientific methods in their investigations and and the few qualified investigators that exist handle dozens of cases at a time for little pay and have limited funds.

“When an investigation is defective the prosecutor nor the judge can be blamed,”, Tayyab said. But according to the Crisis Group, the prosecutors are poorly trained as well.

Intelligence agencies complicate terrorism cases because they often detain suspects before the police are called, says Fawad Hussain Chaudhry, a lawyer who closely followed the prosecution of terrorism cases. Those investigations are then not admissible in court, nor are they ever shared with the police. Not to mention that the detentions are illegal.

“The police then pretend it investigated the case, but misses the evidence,” he says.

It often leaves prosecutors and police with no choice but to rely on witnesses. Tayyab had two witnesses for the attacks on the police station and checkpoint who told police they had attended a planning meeting for the attacks. One witness never appeared in court, despite several notices. The other did, but refused to give his name, father’s name, address or profession out of fear the accused would retaliate. It made the statement inadmissible and the court acquitted the accused.

An anti-terrorism act passed in 1997 states that the government has to provide security to judges, prosecutors, lawyers and witnesses. But in practice, Tayyab said, there is none.

Qadri’s case, which took place in prison with high security, was an exception.

“I haven’t seen any kind of security measures being taken or conducted. Even the prosecutor appears all alone in court, without protection,” he said.

The lack of security opens the way for the accused and their supporters to intimidate prosecutors, lawyers and judges. The courtroom of Judge Pervez Ali Shah, who sentenced Qadri to death, was ransacked and Shah did not show up for work after the judgment, local media reported.

Last year, two prosecutors in Karachi refused to present their case against militants because they were threatened. For their own safety, judges simply just acquit the accused, Chaudhry said.

More: Is Pakistan warming up again to the CIA?

The acquittals worry the Pakistan army, which has lost thousands of men in its battle against militants. Its solution has been to hold more than 2,500 militants, who were captured during operations in the Swat Valley, for more than two years, refusing them a proper trial.

Until recently, that was illegal. But last June, a presidential ordinance legalized it retroactively from 2008.

There is now no limit to the period of time the army can detain militants, according to Pakistan Army Spokesperson Athar Abbas.

The order is limited to the tribal and semi-tribal areas. But Abbas hopes it will be extended to other parts of Pakistan as well.

“Personally, I strongly feel that this should also be applied for terrorist acts in the main cities and towns,” he told GlobalPost.

The law has drawn little criticism in Pakistan.

Meanwhile, Tayyab continues to press for better evidence gathering in the hope it will lower the acquittal rate in his court cases.

“When there are no convictions, the terrorists will feel at liberty to strike at will, because they don’t fear conviction,” he said.