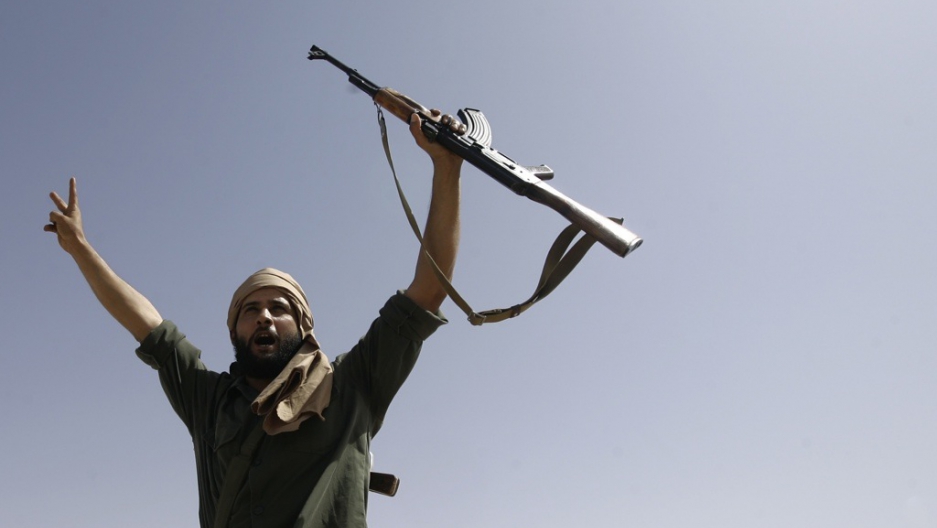 A Libyan rebel flashes the V-sign for victory on Sept. 25, 2011 outside of Bani Walid, Libya.
Credit: Joseph Eid
Share

SIRTE, Libya — As Libyan rebels from the east and those from the west converge on Sirte, the hometown of former Libyan leader Muammar Gaddafi and the last major loyalist holdout in the country, the tension between them is awkward at its best, dangerous at its worst.

The rivalry, while nothing new in this fractious country, is reaching new heights as rebels prepare for what will likely be the final showdown of the Libyan conflict.

In one of the few rebel-controlled neighborhoods of Sirte earlier this week, a seasoned fighter from the western rebel stronghold of Misrata sidled up to a rebel from the revolutionary city of Benghazi, which is in the east, and offered his ostensible ally a few choice words:

Although the competition manifests itself in playful and innocent ways, between the lines lies the future of Libya. As the eastern and western rebels vie for power and prestige in a post-Gaddafi world, and given the difficulty the two sides have had working together, the repercussions could be dire.

Video: Who are Libya's rebels?

Both east and west claim to be the true heroes of the revolution, and neither appears willing to share.

Rebels from Benghazi say they provided the impetus for the uprising when a small but long-running protest movement began to gain traction earlier in the year. The uprising then began in earnest on Feb. 17, they say, when security personnel opened fire on unarmed protesters gathered in the center of their city.

Rebels from Misrata to the west, however, say they are more deserving of the hero mantle because they endured the most sacrifices and put up the most impressive fight. For months they successfully battled back against Gaddafi's troops during one of the bloodiest sieges of the conflict. More than a thousand rebel and loyalist fighters are thought to have died on the streets of Misrata in March and April.

Tensions between the two groups were further stoked by a report on Al Jazeera after the fall of Tripoli in which a Misrata resident claimed that Benghazis made them pay millions of dollars for the weapons they used in their assault on the capital.

Benghazi denies the accusation, saying that it donated the weapons, along with several boatloads of medical supplies.

To their dismay, the Benghazi rebels were not present for Tripoli’s shockingly swift, and well-televised, demise. With several Gaddafi strongholds, including Sirte, lying between Benghazi and Tripoli, they were forced to go by boat, missing out on the initial victory.

“They [rebels from Misrata] say they did everything by themselves, the liberation of Tripoli,” said Osama, a Benghazi native, shaking his head.

Libya: For love of guns

Now that Benghazi rebels have penetrated Sirte from the east and Misrata rebels from the west, the rivalry has arrived in what will likely be the final battle of the Libyan revolution.

But the tension between the two heavily armed groups is unlikely to end when Sirte falls, worrying some ordinary Libyans who fear that the seeds of civil war are being laid.

Hassan Sadaw, a mild-mannered English teacher from Misrata, said he worried that divisions between the two sides would fester, and eventually erupt.

Sadaw said he’s never been a fighter and mostly stayed home during the battle for Misrata, preoccupied only with moving his family from one safe location to another.

“Maybe we’ll have a civil war. We are afraid, if we continue to talk about his, maybe there will be a political vacuum,” he said.

Part of Sadaw’s fear, much like many others from Misrata, is rooted in his distrust of anyone from Benghazi.

“People in Benghazi are reckless,” Sadaw said. It was an impression he said he formed 15 years ago when he visited his sister there. He said he was shocked at how openly Benghazi residents spoke out against Gaddafi, down to only offering black tea instead of green, the color of the flag introduced by Gaddafi in 1977 and a symbol of his political philosophy.

“We are afraid of Benghazi people. They will try to take everything — oil, power, everything — because they said they were abused by Gaddafi,” Sadaw explained. “Here in Misrata, people work a lot. There, they mostly wait for money.”

More: Why they keep fighting for Muammar Gaddafi

Perhaps foreshadowing events to come, some rebel brigades from Misrata have been accused of overstaying their welcome in Tripoli neighborhoods they claim to have liberated. The National Transitional Council, Libya's interim government, asked them to stay in Tripoli to guard strategic places like hospitals, TV stations and army camps. But other reports say that protests by Tripoli residents against the armed groups have begun.

The rivalry between east and west in Libya is nothing new. Instead of emblazoning their pick-up trucks with the traditional revolutionary martyr, Omar Muktar, for instance, Misrata fighters have instead used the image of its own revolutionary hero, Ramadan Al-Swehli, who fought against the Italian occupation in the 1930s.

Omar Muktar, on the other hand, who was finally captured and hung by the Italians in Benghazi in 1931, “just set up ambushes,” he said.

Benghazi natives, of course, disagree. They believe Swehli was gunned down unceremoniously by a tribal group in Bani Walid after they refused to fight alongside him.

Whatever the case may be, the drawn-out feud continues as Libyan rebels, amassing on the outskirts of Sirte, prepare for an all out offensive against the last-remaining Gaddafi loyalists. For the past week, the eastern rebels have engaged in most of the heavy fighting in and around Sirte, and have taken and held some ground in the southeast of the city.

The Misrata rebels, though, say they were the first to enter Sirte.

“The eastern guys are working like a turtle. They have all the weapons. But the first who entered Sirte are the ‘Thawar,’” said Abdul Hakim, a pilot in his professional life, referring to the Misrata rebels, who he supports.

The rivalry, at times, gets downright petty. One fighter complained that Benghazi rebels sprayed bullets into the air for no reason and others lazed about doing nothing. Observers, however, say such behavior is rampant on both sides. Misrata rebels firing indiscriminately into the air after the fall of Tripoli was well-documented by global television networks.

“No one wants to be the last to die, but people need to be doing their job. With some, it’s not clear what their job is,” one Misrata fighter said, referring to what he felt was widespread incompetency among the Benghazi fighters.

Of course, not all love is lost between Misrata and Benghazi. And there is nothing that seems to bring them closer than the imminent demise of Gaddafi’s loyalist army.

When a convoy of several hundred Misrata rebels swept through the Southeast of Sirte on Monday, they met up with Benghazi rebels at their positions around an embattled traffic circle.

“Today, for the first time, we meet,” said Benghazi rebel Mohammed Borega, as he embraced Misrata fighters. “This a new and happy day to connect with our brothers. Misrata and Benghazi all connected together. … Now we go to Sirte.”