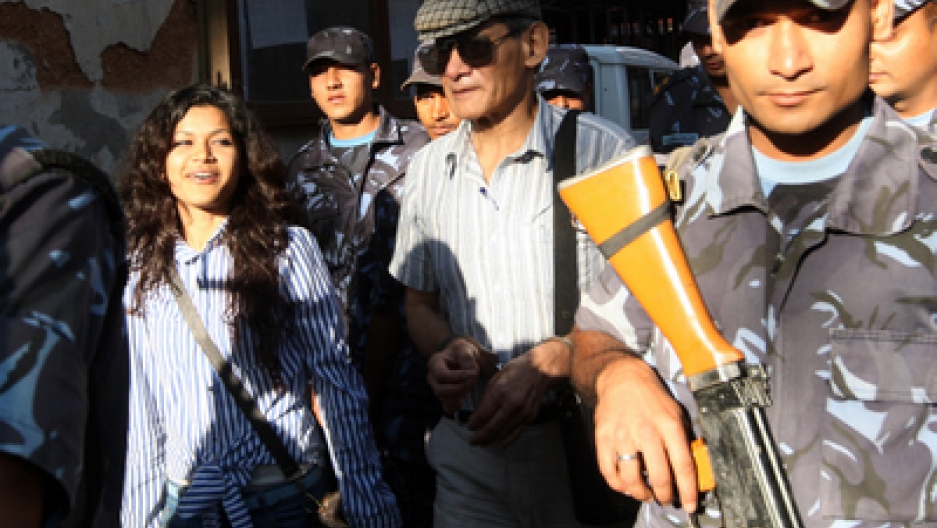 Nepalese police guide alleged French serial killer Charles Sobhraj (center) and his wife Nihita Biswas (left) towards a waiting vehicle after a court hearing in Kathmandu. The 22-year-old Biswas, who claims to have married 67-year-old Charles Sobhraj in a secret ceremony while he serves a life sentence in Nepal, appeared in India's hugely popular reality television show "Bigg Boss" Sunday. Biswas is one of 14 contestants on the show, which is the Indian version of the global hit "Big Brother."
Credit: PRAKASH MATHEMA
Share

Asia's notorious "Bikini Killer" is in the headlines once again due to the 22-year-old Nepalese girl he married secretly while serving a life sentence in Kathmandu, the Times of India reports.  The hook?  Reality TV, of course.

Nihita Biswas Sobhraj, who married the alleged serial killer under the nose of prison authorities, is appearing on India's Bigg Boss, a reality show modeled after Big Brother.  And apparently, she plans to use the platform to do more than make bitchy comments: She's hoping that TV's bully pulpit will help her to clear her husband's name and get him out of the clink.

Sobhraj was captured in Kathmandu in 2003 and convicted of the murder of Connie Jo Bronzich, an American backpacker who was killed in 1975, based on "a document described as Sobhraj's confession to murder before Indian authorities in New Delhi," according to the paper.

But his wife has said that the reports of mass serial killings against him are just rumors and that in many of the countries where he is said to have committed the murders, there is not even any police complaint filed against him.

Meanwhile, even in India, where Sobhraj's crimes were the most well-documented, he was never convicted of murder despite the purported existence of a confession, and in Nepal the court convicted him based on photocopies of evidence, even though the law says they are inadmissible, TOI said.

With his wife planning to plead his case every chance she gets in front of millions of TV viewers, Sobhraj is now "planning to go ballistic, detailing the rampant corruption among police, courts and the prisons on his web site this week," TOI said.

Sobhraj says he is going to answer ny query sent by surfers though the process would take some time since he doesn't have direct Internet access and would have to depend on his lawyer. Added to Bigg Boss, the hype to come through the web site, Twitter and Facebook could create a real embarrassment for the Nepali authorities who have already faced questions at the UN Human Rights Committee in Geneva about violations of Sobhraj's fundamental rights in prison.