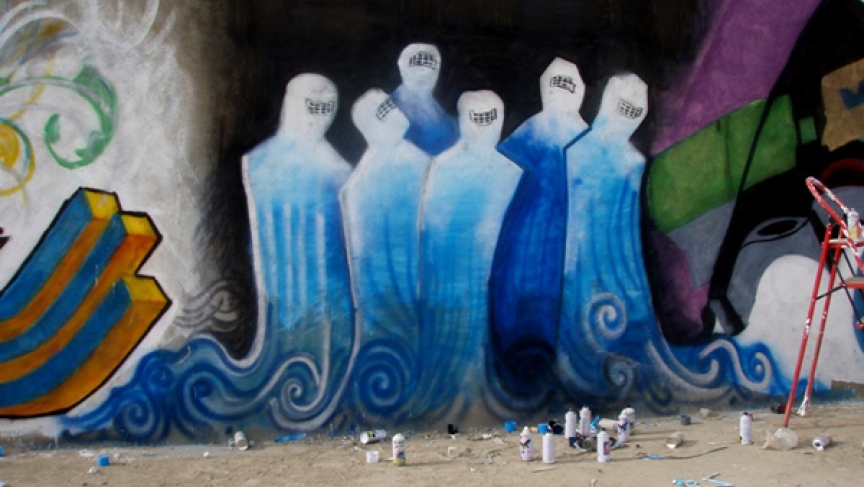 It began in the darkness of night. Guerrilla warriors of a different kind, armed with cans of spray paint. They painted slogans such as “cost of war” and stenciled images of helicopters, guns and soldiers onto the high concrete walls of buildings in the city.

They weren’t Afghan, but they came back in the daytime, and showed locals like Shamsia Hassani how to create street art.

Hassani was one of a group of Afghans who attended a workshop held by a British artist. She was captivated and soon went to an industrial park to create her first work – a huge mural showing a group of women wearing blue burkas emerging from water. (See the image above.)

“You can see the water and woman coming from the water,” she says. “Blue is a freedom color is a clean color and I shows that all Afghan women are like water clean and blue.”

It might be a portrait of progress or hope were it not for the menacing black background. Walls in Kabul are often covered in simple advertising slogans. This new artistic frontier is irresistible to many including Ahmed Ali Akbar. After the workshop, he created his own image of a man screaming.

“This kind of art has rarely been seen here in Afghanistan. It’s something new. Luckily, I was part of the first workshop on it. It’s new and it’s interesting,” says Akbar.

And just in case you think it’s all the preserve of young disaffected youth – Akbar is the director of Afghanistan’s National Gallery.

He says he’s seen a wide range of graffiti – from slogans critical of corruption, political incompetence and druglords to flowers that are meant to signify peace.

“There’s no one single way to characterize it, the main goal is for an artist to express his ideas to the public.”

But trying to exercise freedom of expression here isn’t easy. Even though many walls do carry advertising, graffiti artists aren’t so welcome. So they work at night and work quickly for fear of being caught by police, private security or criminal kidnap gangs.

As a woman, the challenges are even greater for Shamsia Hassani in this conservative country. She’s created wall art only twice – both times inside open air compounds but she’s not letting that stop her.

“I couldn’t go to street to do graffiti work and I decided to have to find a way for myself and I start.”

Captivated by the art form, Shamshia now uses computer software to digitally paint on photos of Kabul’s streets. While she may not gain the same kind of recognition of her male peers, she’s hoping she’ll be able to stage a show – trying to guarantee graffiti is accepted as real art no matter where it appears in the city.