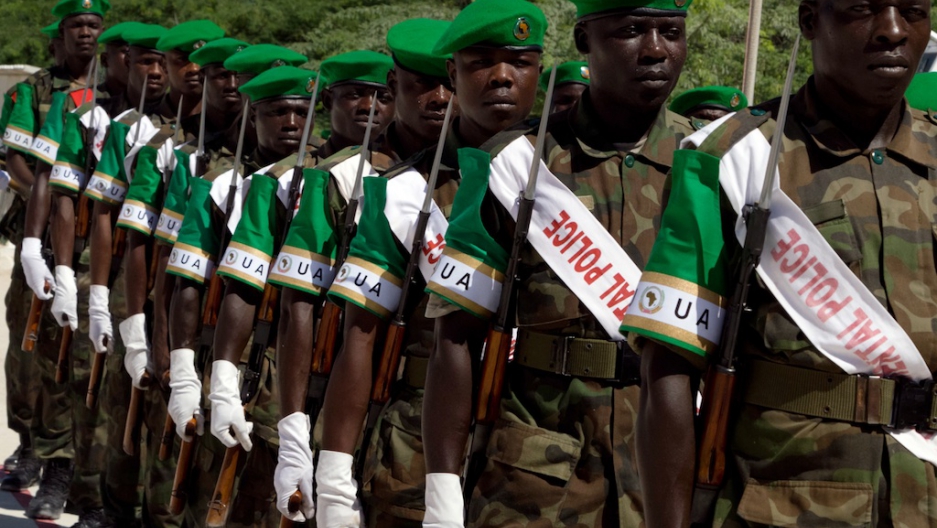 Many of the Ugandan troops returning home from Somalia are able to create a better life with the money they earn as African Union peacekeepers. Here Ugandan soldiers serving in Somalia under the African Union Mission in Somalia (AMISOM) arrive to welcome Somali president Sharif Sheikh Ahmed (unseen) in Mogadishu on November 22, 2009.
Credit: Yasuyoshi Chiba
Share

KAMPALA, Uganda — In Uganda, peacekeepers do it for the money.

The chance to make hundreds of dollars in a month doesn’t come often in a country where many struggle with poverty, but it does come with the opportunity to be a peacekeeper — which is why many Ugandans are excited by the news that the country plans to increase its commitment of peacekeeping troops in Somalia from 6,000 to 8,000.

Uganda is preparing to send 2,000 more troops to Somalia in a bid to protect gains made against Al Shabaab militants, who retreated from Mogadishu in what has been understood as a win for African Union peacekeepers.

The deployment would bring the number of Ugandan soldiers in Somalia to about 8,000, the bulk of the United Nations-backed peacekeeping mission.

Ugandan President Yoweri Museveni, who rarely consults lawmakers on such matters, has in the past expressed a willingness to deploy up to 12,000 troops in Mogadishu as long as the African Union or an international agency picks up the bill.

But Museveni isn't the only one happy to go the distance.

On a recent Saturday afternoon, Bernard Kalebe, a farmer from the western district of Rukungiri, was in Kampala to attend the wedding ceremony of his brother who recently returned from peacekeeping duties in Somalia. The soldier was at once tightlipped, in keeping with official rules that discourage press interviews, but Kalebe had no restrictions.

“Let me tell you,” Kalebe said of his brother, “the man came back with money.”

In the weeks since he returned from Somalia, Benon Turyahikayo had done for himself what he might never have accomplished in a lifetime: he built a house, bought some cattle, married the woman he loved, and now plans to invest some of his savings in a viable business.

“He was in Somalia for one year and a half, but he wants to go back there,” Kalebe said. “Somalia is where he wants to be.”

A posting in Somalia, for many young and broke soldiers, fulfills the rare promise of good money and the chance to build a better life in Uganda when they get back.

Seeking opportunity in another way, hundreds of Ugandans, some of them army veterans, have sought jobs as security guards at American installations in Iraq.

A Ugandan army private, for example, earns about $100 per month, a measly amount in a country increasingly afflicted by inflation. By comparison, a peacekeeper of any rank makes at least $700 in monthly allowances, in addition to a regular army salary. A soldier’s family is entitled to $50,000 as compensation in case of death.

“It’s a lot of money,” said Col. Felix Kulayigye, who speaks for the Ugandan army. He told the story of his assistants who had been begging him to help them get deployed in Somalia. “They are anxious to go,” Kulayigye said, explaining that peacekeepers save most of their money while living in Mogadishu.

But Uganda’s involvement in Somalia has come at a serious cost and with little public scrutiny. At least 60 Ugandan soldiers, but possibly many more, have been killed there. And Uganda has suffered a terrorist attack as a result of sending its troops to Somalia. In July 2010 Al Shabaab, seeking some sort of revenge, staged bomb attacks that killed at least 76 people in Kampala. The terrorist attacks left Museveni threatening to actively engage Al Shabaab, which is linked to Al Qaeda and wants absolute control of Mogadishu.

Only Uganda and Burundi have sent peacekeepers to Somalia, and Museveni is widely regarded as the West’s point man on a mission that many here see as a proxy war against Al Qaeda. Museveni’s tight grip on the military has served him well on this matter, preventing any dissent or critical discussion of Uganda’s role in Somalia. With ambitious army recruitment exercises happening around the county, and with the end of the war in northern Uganda, Museveni can now afford a military excursion in Somalia.

Still, the bulk of the regular army is poorly trained and underpaid, with a small, secretive division — a Special Forces unit headed by Museveni’s son — wielding real power.

“Somalia is a training ground for Uganda’s elite forces,” said Angelo Izama, a political analyst with Fanaka Kwa Wote, a think tank on regional politics and security. “It presents an opportunity to grow the stock of elite forces.”

Ugandan soldiers normally serve at least nine months in Mogadishu, after which they return home, although those with special skills can be asked to stay longer.

Not long after Al Shabaab withdrew from Mogadishu in August, Somali President Sharif Sheikh Ahmed visited Kampala, apparently to make a personal request for more troops in Somalia. In Mogadishu, the mission commander was saying much the same thing.

“The extremists have, however, not withdrawn completely,” said Maj. Gen. Fred Mugisha in a statement issued from Mogadishu. “Ninety to 95 percent of Mogadishu has been liberated, creating areas for starving people to access food aid, but the city is not as calm as we would like it to be.”

It looks like there will be continued demand for Ugandan soldiers in Mogadishu for some time to come.