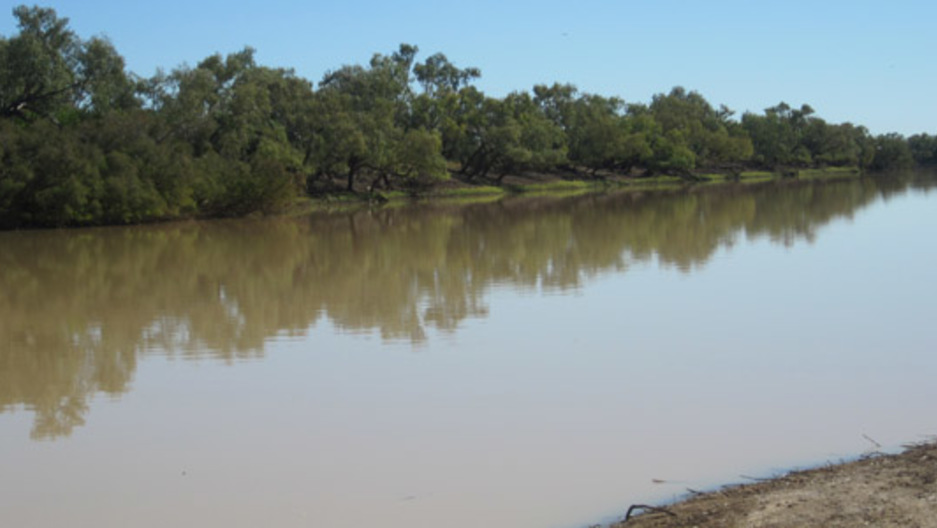 Water is a vital, precious resource everywhere, but perhaps nowhere more valuable than in arid Australia.

In the agricultural belt of southeastern Australia, an area called the Murray-Darling Basin, farmers and ranchers are up in arms about a government plan to dramatically cut their water use. The plan comes after a 12-year drought and decades of river diversions took a huge toll on the environment.

But head almost a thousand miles to the north and it’s a very different story. In rural Queensland, farmers never had much access to water. And many seem happy to keep it that way.

Cattle rancher Angus Emmott, 48, has lived in the interior of northeast Australia his whole life. His closest neighbor is some 10 miles away. I asked him what he does if he needs to borrow some milk or sugar. His answer: “Well, we milk our own cow.”

It’s not just the solitude that makes this life challenging. The climate isn’t exactly cooperative either.

“We get an average of 12 inches of rain a year, but that’s a bit of a misnomer, calling it an average, because some years we get as low as one inch,” said Emmott. “Other years, we just had 40 inches. You do get an average in the long run, I guess, but it’s very, very irregular.”

Creeks and rivers do run through this area. But in dry years, they’re channels of dust. And scientists say the dry years could become even more severe with climate change.

Emmott and other ranchers could build dams and store water for the lean years; that’s what they do in the rich agricultural areas 1,000 miles to the south. And that would make life a heckuva a lot easier. But Emmott doesn’t want to do that.

“These rivers out here, well the rivers across northern Australia, are in relatively good condition. And because these rivers are in great shape, we have the opportunity to actually be a little smart how we develop this country,” said Emmott. “We can actually make sure that we don’t damage the attributes to these rivers that make them so important.”

Emmott’s ranch is massive: four times the size of Boston. Still, Emmott only has about 2,000 head of cattle. He needs all this land so his cattle have room to roam and plenty of grass to make it through the dry years. It’s a romantic lifestyle. But it’s not the most cost-effective way to make a living. After all, Emmott isn’t mastering nature, he’s letting valuable water glide right past him down the river.

“It’s a pretty simple equation in the Australian Outback: the limiting factor on growth is almost always water,” said wildlife biologist Barry Traill with the Pew Environment Group. He took me on a drive through the Outback and explained how this area gets its scarce water. It’s a boom and bust cycle. Ranchers and nature rely on floods that originate 500 miles north in tropical Australia.

“The floods will come through and they’ll keep going for 500 or 800 miles south of us, and they’ll go into country, which has had, in many cases, no rain, no effective rain, for years,” said Traill. “You get these lush green flood plains, several kilometers wide, iridescent green floods plains, going thru these harsh, red sand dune desert. It’s an extraordinary contrast.”

Traill has been working with ranchers like Angus Emmott to protect this system and prevent the damming of these rivers. A coalition of ranchers and conservationists got a law passed by the State of Queensland in 2005 to permanently safeguard these waterways. But each river has to qualify on a registry first, one by one, to get protection.

Conservationists know they’re racing against the clock. According to government projections, Australia’s population could grow by more than 50 percent by mid-century.

And in arid Australia, where there’s unused water, it’s a good bet that somebody will come looking. Barry Traill says, they already have.

“Ten years ago we got a taste of what could happen here,” said Traill. “There was a proposal to put in a very large cotton irrigation farm, but that was, fortunately, I think, very strongly opposed by local people.”

But not everybody here is happy about more regulation.

“It costs you more to actually get the paperwork done than it does to do the job,” said rancher Sam Coxon. His family has been grazing sheep in the interior of Queensland since his great-great grandfather walked 1200 miles here from southern Australia (Victoria) with his herd of sheep in 1887.

Coxon looks every bit the part of outback rancher, his cowboy hat pulled low over his blistered red skin. Coxon said he knows how to care for his land, and that includes needing to irrigate crops. “These small areas of irrigation, they’re to prevent more damage to this environment by weeds. We are about the environment. Without a good environment, we haven’t got a living,” said Coxon.

Coxon’s existing irrigation rights won’t be affected by any new regulations. And he can still buy more water on the free market. Still, he argued that if the river near him is protected, they’re essentially being legislated into forever remaining a dusty outpost. “Look, I mean, it’s the way the world is going. We’re becoming a nanny state,” said Coxon.

On the other hand, ranchers like Angus Emmott say, isn’t that the point of living in the Outback? We spoke by the side of a small, remote watering hole, several hours drive from the nearest metropolis of Birdsville, population 115.

“Regularly we get people from around the area who will all come down here and have a barbeque and sit around, watch the sunset and catch up with each other. We haven’t got the roar of traffic in the background. I don’t know, there’s just something about being out in the real bush,” said Emmott as he surveyed the scene with a contented smile.

But the ‘real bush’ as Emmott knows it is threatened. As climate patterns shift and Australia’s population grows, that ever-so precious resource – water – will undoubtedly become even more coveted.