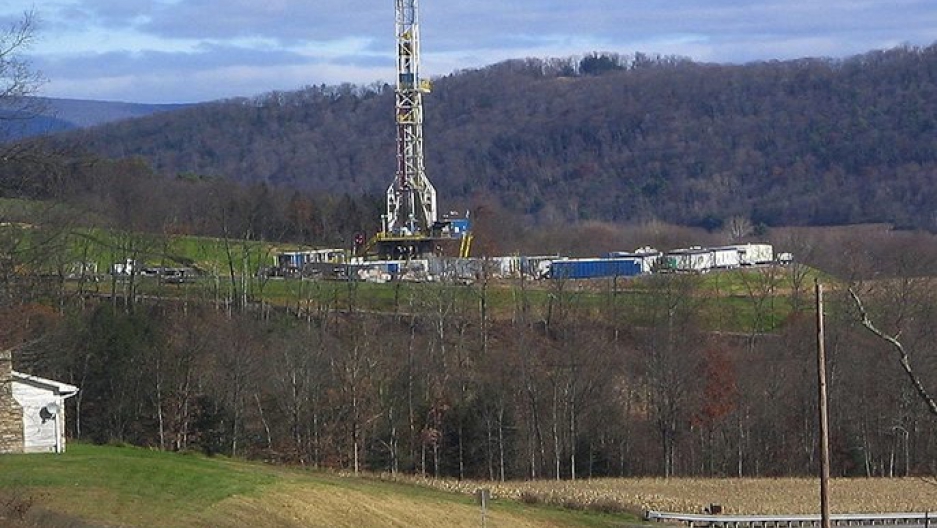 Story by Conrad Wilson for Living on Earth. Listen to audio above for full interview.

Natural gas companies are discovering gas in more and more places, and many communities unaccustomed to drilling rigs and pumps are suddenly right in the middle of a natural gas boom. Along with the growth of the new gas industry are growing concerns about health.

"There were many times when just after you smelled the fumes, that day or the next day, you would be so lethargic that you could sit in a chair for six hours and not move a muscle," Karen Trulove a western Colorado resident told Living on Earth. Eventually, she was forced to move to get away from the fumes.

Nearby, Bill Strudley abandoned his 3500 square foot home after he says his family got sick. He says, "I'd walk out into my driveway at 5:30 in the morning and my wife would follow me and I said, 'You better keep the kids inside today, because it stinks.'" Strudley says his well water eventually started to smell like chemicals, so the family stopped using it. Today his house sits vacant. They've stopped paying their mortgage and rent in a nearby town where natural gas development hasn't hit yet.

Stories like these are increasingly common, as companies have started discovering a lot more gas, sometimes where people already live. But action has yet to come.

"The health impact issue is one that is challenging, because you have to find a causal link," according to Doug Hock, a spokesperson Encana, one of the many operators in the area. He acknowledges that drilling for natural gas is an industrial process that creates pollution. But he says the industry has come a long way in how it interacts with the community to minimize environmental impacts. For example, they've helped develop a hotline for residents to call and report their concerns, including ones about public health.

"We're an industry of scientists and engineers, and we have to make our decisions based on sound science," Hock says. "And so, you know, we get people saying, 'Well, I think this well is making me sick,' but unless we have that link, you know, it's hard for us to react and respond to that."

"This is not a localized event," according to Corey Zurbuch an attorney in Aspen. "The drilling operations are going on in many states around the country. And we’re seeing the same problems over and over again." Zurbuch says he gets calls daily from people affected by natural gas development. He recently filed a class action lawsuit against gas driller Antero Resources to pay for environmental testing and set up a trust fund to help people should they get sick from natural gas development.

Momentum is building around the country for more attention to gas field emissions. The Environmental Protection Agency, under a court order, this summer proposed the first national limits on pollutants from gas drilling, but they're not final yet.

Read the full transcript on the Living on Earth website.

More about "Living on Earth."