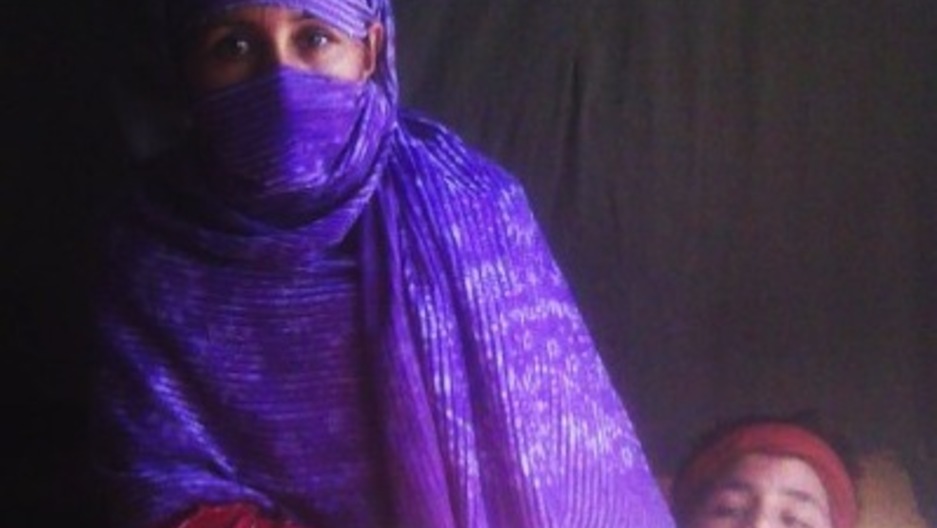 Photo of an Afghan woman and her son in Kabul, Afghanistan (Image by Laura Lynch)

Story by Laura Lynch from PRI's The World. Listen to audio for full report.

It has been almost a decade since US and coalition troops invaded the country, set on toppling Taliban rule and destroying al-Qaeda. Victory over the Taliban was swift.

But bringing peace to the war torn country has been a much more difficult challenge.

In some parts of Kabul, water is a luxury for people who have learned to live with so little.

On a hill in southeastern Kabul, children fill plastic jugs from a hose connected to an underground water supply. From here, they face a short hike up a steep, rocky hillside to carry the water to a unique community.

A Community of Widows

"There aren't any advantages to living here, but I have to," said 25-year-old Fawzia. She's one of the newest residents. "I can't afford to live downtown. And this house doesn't have windows or doors. It's not a proper home."

Her home is a concrete block, perhaps six feet by four feet, overlooking a cemetery. The stench of raw sewage hangs in the air. There is no furniture, just some mattresses on the floor and a tattered old scenic photo of Kabul stuck to one wall.

Fawzia's husband died in a car accident two years ago and his family refused to take care of her four children. She moved here two months ago. Like the other thousand or so widows who live here, Fawzia may not have much. But it's more than they might have had in a country where widows are often abused or ignored if their late husband's family refuses to take them in.

A few steps away, Zarmina Faima slapped mud onto the bricks of a house in progress. She was covered in grey muck from head to toe and smiling.

Zarmina is building a new house after living here for four years in a smaller home. She said her husband died in a suicide attack. For a time, she tried to live with her husband's family. But Zarmina said the abuse she suffered drove her away and onto this hill.

Afghanistan's wars and violence have claimed thousands and thousands of victims over the years. The United Nations estimates nearly half the children in Kabul have lost a parent.

Estimating the number of widows is guesswork, but it could be up to two million. Selay Ghaffar who heads up an organization providing assistance to women and children, says there are few options for widows who are rejected by their husband's relatives.

"The widow's life ended up to the begging, prostitution, trafficking and to being a laborer working somewhere, to be always exploited by their owner," Ghaffar said.

In other words, slavery.