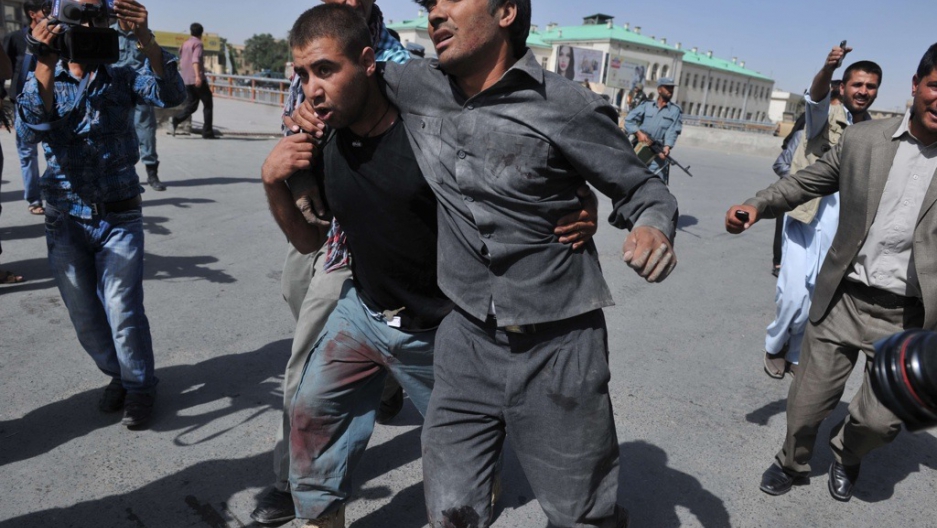 An Afghan policeman helps a wounded man during clashes following an attack on a police station at the main market in central Kabul on June 18, 2011. Armed militants stormed a police station in the heart of the Afghan capital, triggering an explosion and ongoing heavy exchange of fire, officials and witnesses said. The attackers got into the police station in the crowded main central market area, close to the Afghan presidential palace, defence ministry and other official buildings.
Credit: Massoud Hossaini
Share

KABUL, Afghanistan — A gun attack at a CIA base in the heart of Kabul is again raising fears about insecurity in the Afghan capital. A series of spectacular insurgent assaults have killed a number of Afghan civilians and threatened high-profile targets here in recent months.

An Afghan employed by the U.S. government killed one American and injured another after opening fire Sunday night at a location security officials say is occupied by the CIA, and that is close to the heavily-fortified U.S. embassy and presidential palace in Kabul.

The gunman, whose motives are unclear, was shot dead at the scene. The CIA is said to have taken over the site, once known as the Ariana Hotel, shortly after the U.S.-led invasion of Afghanistan in 2001.

Kabul: Are these attacks the shape of things to come?

“The motivation for the attack is still under investigation,” the U.S. embassy said in a statement. The Afghan employee, who many speculated was an informant for the spy agency, was not authorized to carry a weapon, embassy spokesman Gavin Sundwall said.

But both the embassy and NATO-led coalition remained for the most part tight-lipped about the incident.

Even as local witnesses were reporting the landing of an international medevac helicopter on the scene Sunday night, a spokesman for the International Security Assistance Forces (ISAF) said the coalition was “completely unaware” of any major insurgent-related activity in the capital.

There have been a number of incidents, particularly this year, where Afghan security forces have turned their guns on their foreign mentors — whether as Taliban turncoats or because of anger over personal disputes with international troops.

The Taliban, which has claimed similar attacks in the past, did not assert responsibility for the assault.

He said culture clashes between foreign and Afghan troops — whom often live together in tight, cramped quarters — as NATO undertakes a mammoth mission to train and equip Afghan security forces is fueling anger on both sides.

Afghanistan: After 10 years of war, Afghanistan is not far from where it started

“When they are working together, as security forces, there will be misunderstandings,” Basharat said. “If the foreign troops don’t obey the rules of Afghan culture, there will be problems.”

Still, Sunday’s attack rattled the already shaken nerves of Kabul residents, who have seen three high-profile attacks in the past two weeks, including a 20-hour assault on the U.S. Embassy on Sept. 13, and the assassination of a prominent Afghan politician last Tuesday.

U.S. officials, including the departing Joint Chiefs of Staff Adm. Michael Mullen, laid the blame for theatrical attacks on the Pakistan-based militant Haqqani network.
But the insurgent-led blows have left Kabulis jittery and NATO, with close to 130,000 troops across Afghanistan, scrambling to explain why even Taliban-affiliated militants are able to strike so close to U.S. and Afghan centers of power.

The Afghan government is itself reeling from the assassination of former president and High Peace Council chief, Burhanuddin Rabbani, by a suicide bomber posing as a Taliban peace envoy on Tuesday.

While Rabbani was known less as a peacemaker than a ruthless warlord that presided over years of bloodshed in Afghanistan in the 1990s, he commanded respect among many powerful ethnic Tajiks who warmed to the idea of peace talks with the largely Pashtun Taliban only because Rabbani was at the helm.

The slain former president was tasked with spearheading peace negotiations with the Taliban a year ago, during which he made little headway.
But observers are worried the assassination will re-open old wounds based on ethnic rivalries, further destabilizing both the country and the capital as violence is on the rise.

"Rabbani's appointment as chairman of the peace council kept the Tajik groups, the Northern Alliance in particular, quiet in their opposition to talks with the Taliban," Moen Marstial, a member of parliament from the northern, ethnically mixed Kunduz province, said.

"Now, the Northern Alliance can say: 'We kept quiet and we wanted peace. And the Taliban and armed opposition — they didn't want peace,’” he continued. “’So now, we don't want peace with the Taliban.’”