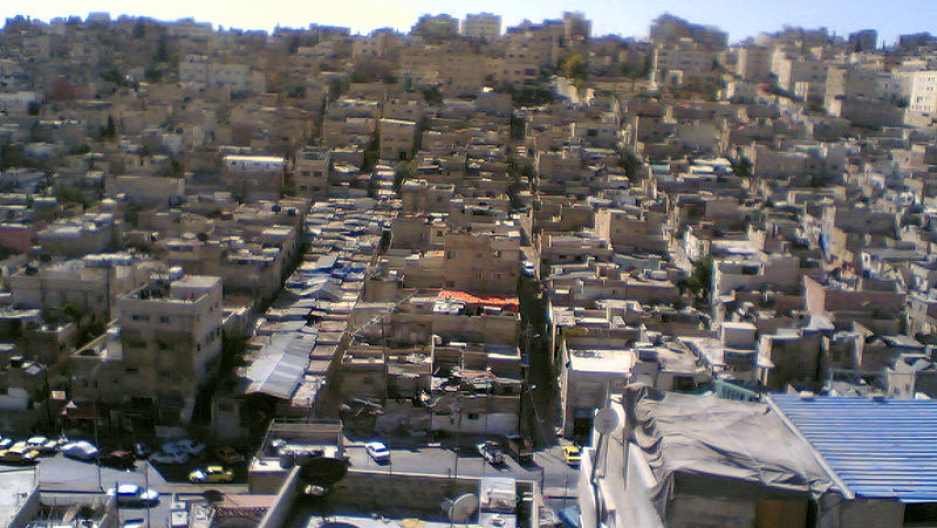 Photo of a Palestinian Refugee Camp in Jordan (Image by Wikimedia user Hasanisawi.)

Story by Dale Gavlak from PRI's The World. Listen to audio for full report.

The run-down streets of the Baqa'a camp may be buzzing with activity, but the mood among its residents is somber.

Khalid Arar, a lawyer in the camp, said he and others fear Palestinian leader Mahmoud Abbas' attempt to gain full membership status for Palestine at the United Nations will leave them stranded.

"The Palestinian issue involves refugees," Arar said. "This is a refugee camp. What is the fate of refugees in the camps? What's our fate? Will we return to Palestine if a state is established on what remains of the West Bank? Are we going to return to Palestine? I don't think so. This is not a solution. We won't accept anything that doesn't include the right of return for the refugees to their homeland."

The largest host of Palestinian refugees and their dependents, Jordan has 2 million seeking shelter inside its borders. That's 40,000 more refugees than in the West Bank and Gaza.

For these refugees, the right of return means their right to go back to land or property they were forced to leave decades ago in what is now Israel or the Palestinian territories. This has long been a sticking point for Mideast peace negotiators. And residents here don't see that changing with u-n membership for Palestine. Ismail Quteit is an employee at the camp's orphanage.

"The UN initiative doesn't give Palestinians their full rights," he complained, "and a UN-recognized state would cover just a fraction of the land that used to be Palestine.

Quteit said he's also worried about who would represent refugees stuck outside the new state.

Another resident, a social worker named Fadi Abid, said Palestinian refugees feel let down by the world community. They see assistance given to Libya and other Arab countries undergoing major changes with moves toward freedom and perhaps even democracy. But the Palestinian refugees, he noted, have been caught in a holding pattern for more than 50 years.

"We're frustrated by the biased attitude towards us in the world," Abid said. "The UN helps refugees from other conflicts return home, but not Palestinian refugees. Now, I'm very afraid of this announcement. I don't trust there will be an independent sovereign Palestinian state. The declaration at the UN would be very dangerous because I feel at that moment my rights as a Palestinian refugee would collapse."

That's not necessarily so, said Daoud Kuttab. He's a columnist here in Jordan and a former journalism professor at Princeton University. Kuttab said the status of Palestinian refugees is not affected by the membership bid at the UN.

When that is, remains as uncertain as ever. And Palestinians say that's not good news for the refugees who've already been waiting for a solution for decades.