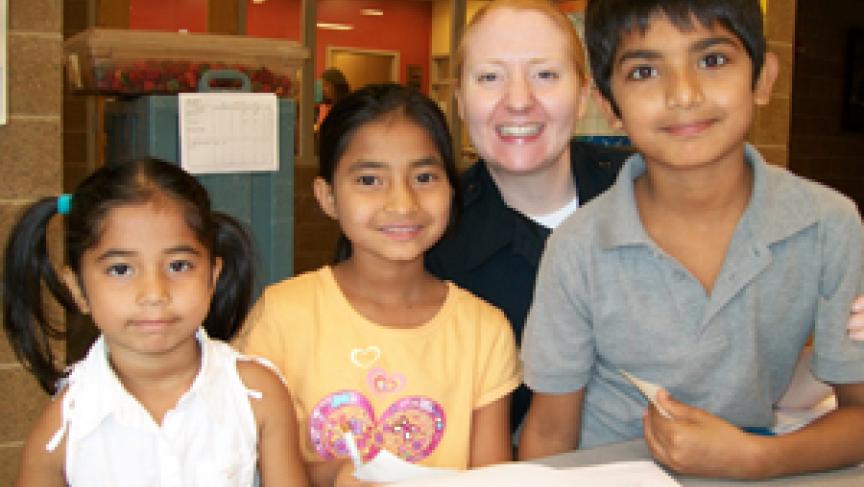 Fargo police officer Cristie Jacobsen has responded to a lot of 9-11 calls, but few with less urgency than this one. "A teenage girl called the police on her mother because her mother had prepared a very simple ethnic meal for her and she didn't like it," said Jacobsen.

Coming to a new nation as a refugee -- adjusting to a new language, culture, and climate -- is always a struggle. But now in Fargo, North Dakota many refugee parents are being manipulated by their children.

Refugee children have been calling the Fargo Police because they don't want to do the dishes or wear a particular shirt. They've also gotten a lot of calls about this: Parents were taking away their kid's Mountain Dew.

"The children didn't like it," said Jacobsen. "Because they had gotten used to drinking it, they enjoyed the caffeine splurge and things like that and so it became a power struggle."

To help deal with problems like this, and explain to refugee adults and children what the law and police can and cannot do, the Fargo Police assigned Jacobsen to work as a cultural liaison officer with new refugees. She meets regularly with the refugee and immigrant community, holding workshops and visiting their schools and places of business.

Close to 4,000 refugees have moved to the Fargo area since 1997. That's about 2 percent of the greater population. The refugees have come from places like Bosnia, Liberia, Iraq, and most recently a large influx from Bhutan.

The children have one huge advantage over their parents: They're able to master English much more quickly.

"The kids get to know the language and the culture, before the parents do. And the parents are terrified," said Vonnie Sanders, who directs the English language learners program for the Fargo School District.

Sanders said when refugee children arrive in Fargo, they're quickly placed in school; their parents go to work at isolating jobs such as cleaning hotel rooms or working in chicken processing plants. The parents do get some English instruction, but Sanders said the classroom time isn't adequate.

"It's two-and-a-half, three hours in the morning. That isn't enough for them, four days a week," said Sanders. "The other thing is then when it comes to the end of the month, it's $2.50 to ride the bus, they can't afford to get there. Or, they have a sick kid, they can't go."

In Fargo, there's another barrier to English-learning: the winters.

"Fargo, we actually won some national competition of being the worst weather city in the US," said Cristie Jacobsen. She pumped her fist and added with an insincere cheer, "Yea, us."

Winter temperatures regularly dip down to below 10 or 20 degrees Fahrenheit in Fargo. "And then with our wind-chill factor, we can get into negative 30, or negative 40," said Jacobsen.

Now imagine you're a refugee from Rwanda or Sudan. And you don't have a car because you came to this country with nothing. And there's no direct bus to class.

"And so, you'll see them just bundled up like little Eskimos, walking a couple of miles to English class and back to their homes," said Jacobsen.

The refugees' lack of English skills has also caused some tension in the community. Heather Ranck teaches an international business class at the University of Mary in North Dakota where she has her students write a letter to the editor about an international issue of concern.

"And time after time, in every class I would see a fairly negative article from the students about why there were so many immigrants moving into the community, a lack of understanding about who refugees were or why they were here," said Ranck.

This got Ranck thinking: there has to be a better way. She helped raise money through the local Rotary Club to provide alternative places and times for refugees to learn English. They're also using the classrooms and resources of the local school system, which the Fargo school district is providing.

In an evening class I visited, about a dozen refugees from Bhutan and Ethiopia were hunched over computers, looking at colorful images on the screens. They were using software from the company Rosetta Stone. A voice described the photo, then the students repeated a syllable, a word, or a phrase into a microphone. The students were paired with volunteer tutors from the Rotary Club.

The students were engaged and seemed to be learning, but the software wasn't perfect. One woman was trying to say the last syllable of the word "children," repeating the syllable "dren" over and over for about 30 seconds.

Several volunteers got a little frustrated with the process. "You're going to have to speak louder. Don't worry about us. If you have to, yell it," said one volunteer to a student.