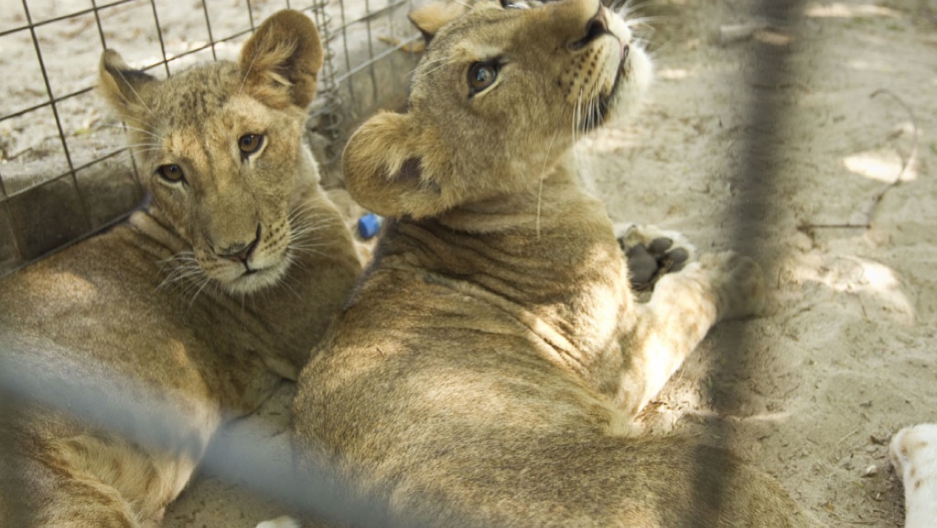 Their 25-by-25 foot enclosure in a copse of shady acacia trees was surrounded by a steel mesh usually used in blast-proof walls; a wooden dog kennel in the corner protected them from occasional tropical downpours.
Credit: Tristan McConnell
Share

MOGADISHU, Somalia — Behind a fortified compound encircled with sandbags near Mogadishu’s airport is a large fenced enclosure that was the unlikely home to a pair of lion cubs rescued from smugglers earlier this year.

The two cubs were discovered aboard a ship at Mogadishu port. They were taken in and cared for by foreign contractors in the war-torn city until last week, when they were finally flown out to an animal sanctuary in South Africa.

Grumpy and Scar, as they were nicknamed, (the former has a bad temper and is prone to nipping overfriendly visitors; the latter has a blemish on her forehead) were found and confiscated by port authorities in late February.

Officials believe they were to be shipped to the home of a wealthy exotic-pet owner in the Arabian Gulf, and their discovery sheds light on the hidden plunder of Somalia’s wildlife and natural resources from the country’s anarchic hinterland.

“Smuggling animals has been a problem since the fall of the Somali state,” said Dr. Osman Gedow Amir, chairman of the Somali Organic Agriculture Development Organization, to GlobalPost.

The German-trained biogeographer researches the destruction wrought on Somalia’s environment by 20 years of war.

More on Somalia: Somalia Famine: How to help

“My studies have found smuggling in each region of Somalia, with demand coming from the Gulf States and the Far East,” he said, referring to a paper submitted to the International Union for Conservation of Nature in 2006. The Gulf States have the highest demand, he said, but Asia comes in second.

His research shows that more common than the smuggling of lions is the smuggling of large birds such as raptors and bustards, which are like vultures; as well as antelopes. All of them are kept as exotic pets. Demand from Asia is mostly for reptiles, including snakes and chameleons.

Amir estimated that at current prices Grumpy and Scar could be worth around $1,000 each — “This is big business,” he said — and warned that
smuggling was decimating populations and could lead to the local disappearance of some endemic species.

It is not just animals that have suffered.

“Huge amounts of charcoal is exported to the Gulf States,” said Amir. “We are destroying our ecosystem.”

A recent report by a team of United Nations investigators monitoring the arms embargo on Somalia described the charcoal trade as “black gold” for Al Shabaab, Somalia’s Islamist insurgent group, which profits from the trade.

“Charcoal is gathered from pastoralist and agricultural areas, mainly from acacia forests in riverine zones between the Juba and Shabelle rivers,” the report said. “Packaged and sold in sacks weighing 23 to 25 kilograms each, charcoal has become the most lucrative source of income for Al Shabaab. An estimated 80 percent of charcoal produced in Somalia is destined for export.”

The report estimated that Al Shabaab’s annual income from charcoal exported from the port at Kismayo is more than $15 million — the result of deforestation on a massive scale and the destruction of animal (and human) habitat.

But, as Amir said, “To have wildlife protection you need a state and law enforcement; without that you can do nothing.”  Somalia has neither, which makes Grumpy and Scar all the luckier and their tale all the more uplifting.

With their oversized paws, furry ears and dark-spotted tummies and legs, the cubs became an attraction at the camp run by Bancroft Global Development located close to the airport in Mogadishu.

Their 25-by-25 foot enclosure under a copse of shady acacia trees was surrounded by a steel mesh usually used in blast-proof walls; a wooden dog kennel in the corner protected them from occasional tropical downpours.

Their keeper, who did not want to be named, was a South African dog handler working with Bancroft’s team of security advisors in Mogadishu. Last week, he escorted his leonine charges as far as Uganda from where they were flown on to South Africa.

His hands and forearms are covered in nicks and scratches from when the lions got cross — usually Grumpy was to blame, he said — or just overly exuberant in their play.

“They just fell into our hands,” he told GlobalPost. “No one else had the capacity to look after them, so we took them on. We’ve been muddling through feeding them and giving antibiotics to keep them healthy. It’s not the same thing as looking after dogs and cats.”

When they first arrived, the lion cubs were as small as kittens, and were fed on a mixture of eggs, meat and milk. They have grown fast. By the end of their stay in Mogadishu they were eating a whole goat every few days.

Recently a vet was flown in from Uganda to give the animals a medical check-up, take blood samples, give vaccinations and microchip them in preparation for their expected “export” to the South African game reserve.

Residents and guests at Bancroft’s Mogadishu compound said they would miss the cubs, but there is little doubt they will have happier — and safer — lives outside Somalia.