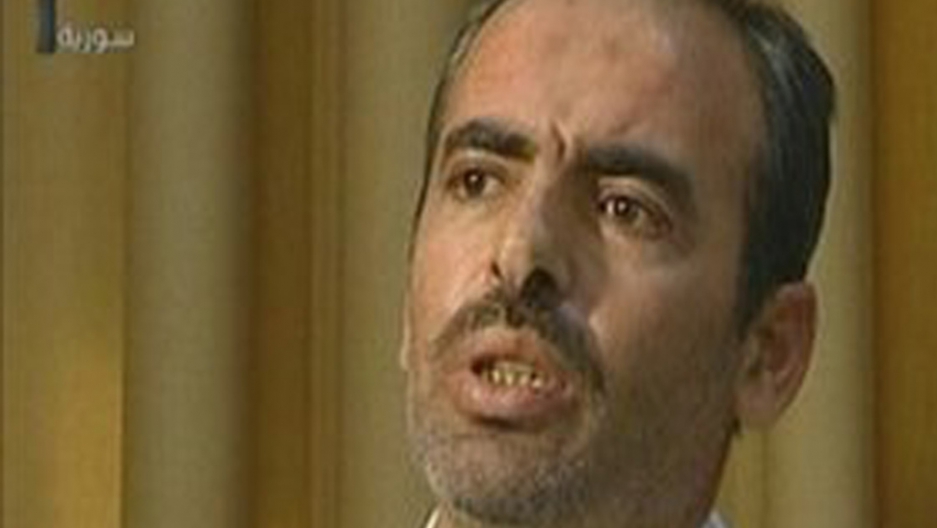 Before his ‘confession’ on state-run TV, defected Colonel Hussein Harmoush had reportedly seen members of his family killed and his home razed to the ground.
Share

What to do when a top military brass refuses his orders to open fire on peaceful protestors and instead defects and records video outlining massacres committed in the name of the regime?

If you’re the Assad family the answer is simple: Send some heavies over to the family home to reportedly arrest, torture and kill the elderly brother, aged 74, and the brother-in-law; shoot and imprison the sister-in-law and a nephew; torture and kill some cousins, including a 12-year-old child; then blast the home to pieces with guns.

Next, send agents to nab the offending officer from his refuge, bring him back to Damascus and stick him on regime-run TV to retract all the nasty things he said about the violence of Assad’s security forces.

Such was the tragic fate of Lt Col Hussein Harmoush, one of the first high ranking Syrian officers to defect from the army and who recorded compelling video testimony describing witnessing a massacre of civilians in north-west Syria in June.

GlobalPost used Harmoush’s testimony as part of a video on defected soldiers and members of the Syrian security forces: http://www.globalpost.com/video/5651142/raw-feed-syrian-soldiers-break-r...

Harmoush was believed to be in hiding in neighbouring Turkey where he became part of the Free Officers Movement, calling on the Syrian army to back the people, not the Assad regime.

Little was heard of him for months until he appeared by surprise on state-run Syria TV on September 15, ashen faced and thin, retracting his earlier testimony.

“During my service in the Syrian army, nobody has ordered me to fire at the civilians or any others,” Harmoush told his interviewer, after some prompting. “I didn't see or hear any commander in the army that had given orders to shoot at civilians.”

Unsurprisingly, his ‘confession’ continued to echo the regime’s version of what is taking place in Syria. Harmoush said activists in Turkey had pledged to help him arm Syrian civilians, but added: "They were all promises... they promised to supply me with weapons and money for liberation, but they were just promises."

Harmoush said groups such as the Muslim Brotherhood told him they had smuggled weapons into Syrian areas such as Homs, Hama, Idlib and Lattakia.

Referring to the deaths in Syrian towns, he said: "I am sure that armed groups were the killers." Regime media and officials regularly refer to "armed groups" as being responsible for the violence in Syria, which is now believed to have killed over 5,000 people.

A spokesman for the opposition LCC network in Idleb told GlobalPost security forces that ahead of Harmoush’s TV appearance, security forces had attacked his family home in Ebleen village, in the north-west province, killing his elderly brother Mohammed, 74.

On its website, the LCC provided further details of the murders and arrests of Harmoush’s closest family members.
Syrian activists in Turkey blamed the Turkish authorities for handing Harmoush over to Syria, arguing that he would not have returned to Syria of his own accord.

But the Turkish foreign ministry said no Syrian refugees had ever been sent back against their will and Turkish officials reportedly believe Harmoush may have been persuaded or coerced to go back by infiltrators from Syrian intelligence inside the refugee camps set up in Turkey for Syrians fleeing the violence.