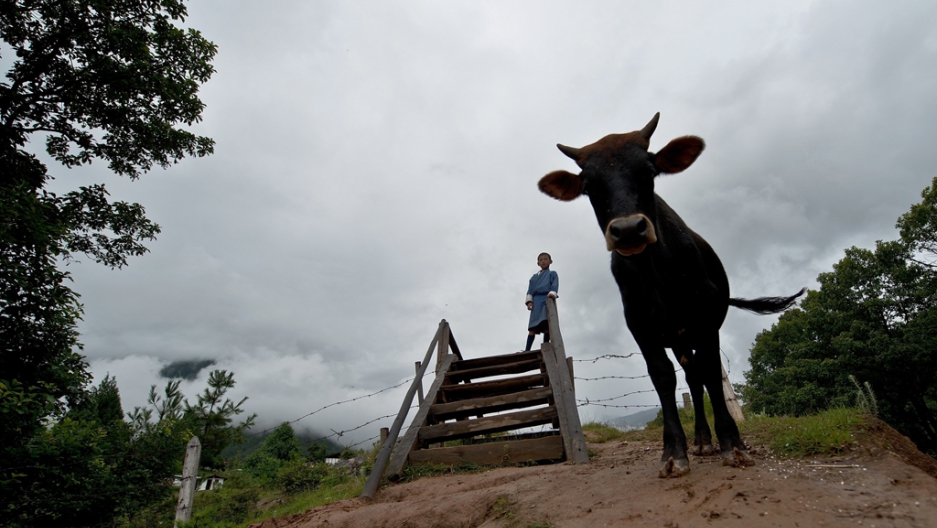 A Bhutanese schoolchild stands on a make-shift bridge in Thimphu on Aug. 18, 2011.
Credit: Manan Vatsyayana
Share

NEW YORK — Bhutan has a thing for happiness.

As if it weren’t enough that the mountainous country falls amid some of the most pristine and profitable rivers in the world, the right to happiness is actually prescribed by royal decree and the national constitution.

Rather than your run-of-the-mill gross-domestic product, Bhutan — a country of less than 800,000 residents sandwiched between China and India — instead favors its homegrown GNH: Gross National Happiness.

But there appears to be a growing confusion over what this happiness means.

Bhutan, emerging from centuries of isolation tucked away deep in the Himalayas, teems with paradoxes and dichotomies.

While clinging to centuries-old traditions, it races for development. Sometimes, cultural preservation trumps profit. Other times, it doesn’t. Officials say democracy, which only came to Bhutan in March of 2008, is paramount. But people don't always understand why.

More from GlobalPost: Why Bhutan's "Gross National Happiness" is a joke

“The [international community] all says, ‘Bhutan’s democracy has been successful.’ And my response is: ‘We’re not a democracy yet. We’re an emerging democracy.’ The biggest challenge that we are faced with is the promotion of, or the development of, the democratic culture,” he said.

Indeed, the country only held its first local elections last June. Yet, Bhutan’s central government, led by the Penn State-educated Thinley, appears to be a solid one, pursuing a classic model of state formation in communities unfamiliar with what a state is.

Before democracy can thrive, Thinley continued, the benefits of a strong centralized state must assume salience. He reasons that if the government can provide actual benefits to the people, then a communal commitment to democracy — not just happiness — will follow.

Bhutan’s recent budgets routinely throw more than 20 percent of its allocations at education and health care.

Health centers have sprouted in even the most inhospitable areas and the infant-mortality rate has plummeted from more than 10 percent in 2005 to less than 5 percent today, according to CIA records.

A nascent grid of roads and electricity has stitched together the hinterlands, driving a steady stream of young people to the cities and towns for education. Modernization has become a buzz word.

But for exactly these reasons, there are murmurs of concern across Bhutan. Many ask, what’s more important — culture, or development?

“It’s a difficult balance, and it will continue to be a difficult balance,” said Druk Zom, 40, who came to the United States 10 years ago from rural eastern Bhutan. “Especially for teenagers and anyone in the next generation, because for them, they feel so cool when they can dress up like foreigners.”

Such trepidations contrast Bhutan and its people with other developing Asian nations that have come under criticism for allowing teeny-bop development to outpace substantive education. Cambodia, for instance, pursues skyscrapers in Phnom Penh while rural schools atrophy.

“In the pursuit of happiness, it’s important to balance your material needs with your mental needs,” Thinley said. “As some countries become richer materially, they become poorer spiritually, so [development] often comes at the cost of spiritual impoverishment.”

But happiness, it turns out, can make for fastidious decision-making. Especially for a country like Bhutan.

There are endlessly complex laws regulating foreign investment. The Bhutanese government prohibits foreign timbering, tobacco products, hotels below three stars, or anything else that may damage the environment or taint Bhutanese culture.

In the Heritage Foundation’s freedom of foreign investment index, Bhutan received a score of 20 out of 100, 30 points below the international average. Last year, Bhutan got a score of 15.

Only a few 100-percent direct foreign investments have wriggled into the isolated kingdom — the first such experiment being hazelnuts. That’s right, within six years, Bhutan will be mass-exporting a key ingredient of chocolate, Nutella spread, and Ferrero Rochers.

“Our team feels a profound sense of responsibility to make this venture a success,” wrote Daniel Spitzer, chief executive officer of Mountain Hazelnut Venture, in an email. “Bhutan is at an inflection point transitioning from a traditional society into a ‘market-based economy, with Bhutanese-characteristics.’”

Outside of hazelnuts, though, “a lot of foreign investors aren’t coming forward,” said Bruce Bunting, president of the Bhutan Foundation in Washington D.C.

“Bhutan is a niche market and very unique,” he said, adding that he doesn’t blame the country’s hyper-selective financial policies. “Foreign investors just don’t see it. They don’t get the point in Bhutan.”

Two very defined commitments in Bhutan — one to democracy, the other to cultural preservation — seem about to collide.

If Thinley is to be believed, and the country’s democracy does hinge on spreading societal benefits, the government will need more money in the coming years.

But it may not have its rivers as a reliable source, which currently contribute more than half of the country’s $650 million in revenues through hydropower sales to India. As the grip of climate change tightens around South Asia, Bhutan’s waterways will likely continue their already steep declines.

As such, the country could either potentially throw itself open to rampant tourism — think Thailand — or team up with foreign investments that aren’t culturally palatable. Or Bhutan could forego dealings with foreigners, lose out on some money, and jeopardize its “emerging democracy.”