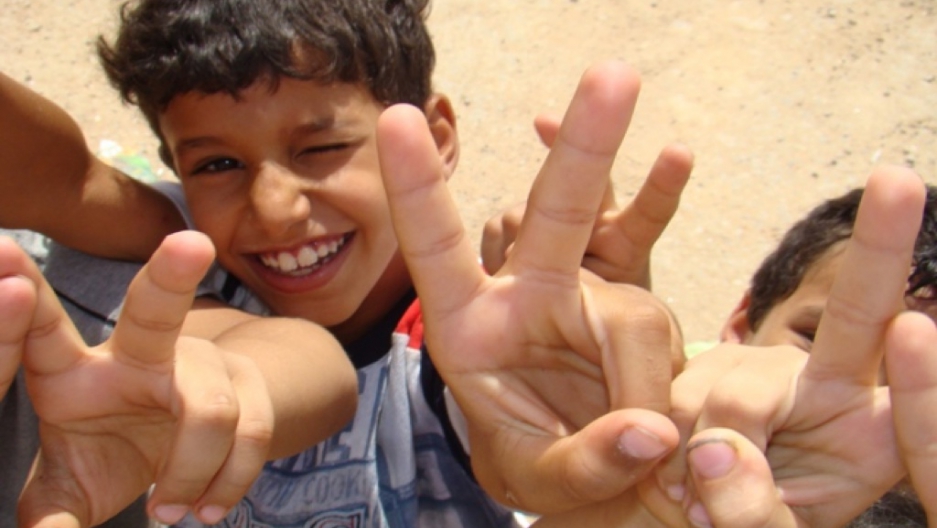 Children from Sirte make the victory sign showing support for the rebels as their families wait for clearance at the Estada checkpoint after fleeing from Sirte Monday.
Credit: Tracey Shelton
Share

SIRTE, Libya — More than 100 families fled the war-torn city of Sirte Monday morning as forces from Libya’s new government struggled to secure a safe exodus for as many civilians as possible.

Forces who were fighting inside the city Saturday withdrew on Sunday to secure the perimeter of Sirte in preparation for Monday's evacuation. In an interview with GlobalPost Sunday evening, Ramadan Zalmore, the chairman of the military council, said they would evacuate civilians before reentering the city.

“Gaddafi forces have been holding hundreds of families hostage, refusing to let them leave the area,” he said. “They have been using family homes to shoot from. We do not know which of these homes still have families inside, so it is not possible to return fire. We must get the civilians out before we make a full advance.”

Families fleeing the city Monday confirmed that pro-Gaddafi forces had prevented their exit since the transitional government's forces advanced on the city.

A steady stream of civilian vehicles lined the long route from Misrata to Sirte as armed rebel trucks sped past toward the battle. Some civilian vehicles were packed with 10 or more men, women and children. Others overflowed with belongings. Roadside tankers distributed fuel to those fleeing the area as well as transitional government fighters.

At a temporary check point in Estada, 160km from Sirte, more than 50 cars waited in the desert heat. Groups of young children, oblivious to the severity of the situation, ran and played between the vehicles. Women spoke of the harsh conditions and fear they have faced in recent weeks. Checkpoint security forces searched each car thoroughly for weapons and checked IDs before allowing civilians to pass.

“Until now we have had no information, no communication, no television or radio, no Benzene, no milk for the baby,” said one man traveling with his wife and two small daughters, en route to Tripoli.

The man who was fearful of being named said they had escaped the city with the help of rebel forces.

Confusion and fear were clear among the people who have remained completely cut off from outside communication for weeks. Some were unaware that Tripoli had fallen to the new government. Others had limited information regarding the security situation elsewhere in the country. Most spoke openly but were afraid to be named, seemingly wary of the new government they knew little about.

“There are still many snipers. If anyone tries to leave the city they are shooting them dead,” said one 26-year-old man traveling with his extended family of 15. “They shot two people in our area yesterday. We have been trying to find a safe passage but Gaddafi loyalists have been blocking the way.”

Some families were heading toward relatives in other cities. For those without shelter, temporary accommodation has been set up in a group of abandoned apartment blocks in the city of Tuwarga.

On the outskirts of Sirte, anti-Gaddafi forces fired mortars into the areas already cleared of civilians. Grad missiles and mortars were fired back steadily. Some fighters entered Sirte to secure an exit for families before retreating to the city outskirts again.

"We tried to rescue a group of around 10 to 15 families just down this way, but as soon as we moved in they began firing [mortars]," said one anti-Gaddafi fighter, Mohammed Alkot. "We couldn't get to them. They are still trapped inside."

Salah Badi, the high commander of the Western frontline, said there were still at least 20,000 families inside the city. The problem they now face is determing who of those left are aiding the Gaddafi troops.

"Gaddafi tried to give all the people, and also the women, weapons to defend Sirte. We all the time hear him speaking about this in his broadcasts," Badi said. "Now the people leaving at this time are normal, but some of the enemy may be escaping with these families."

Seven were reported injured at Misrata's Central Hospital, including one small boy from Sirte who had been hit by shrapnel from a Grad rocket as his family fled the city. The field hospital for the Eastern front was targeted at around 5:30 p.m. by heavy mortar fire from within the city. Patients had to be evacuated. Doctors said more of the injured were being brought in by ambulance, but they did not know how many.