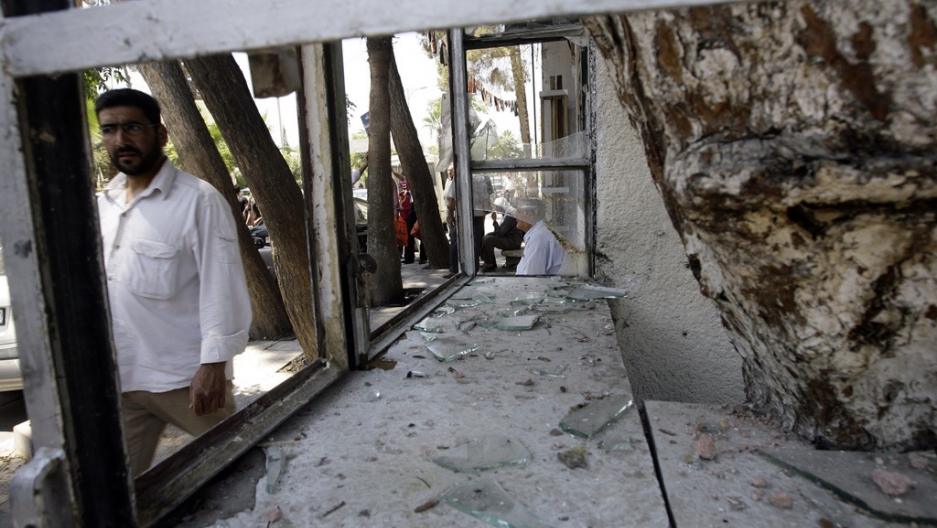 BEIRUT, Lebanon — A set of eyes watched from the shop as a group of young men dashed down a side street, with security forces close behind. The eyes watched as a resident opened his door to let the men in, just in time.

It was a Friday in Duma, a suburb northeast of Damascus, and, as every week for the past five months, pro-democracy activists were defying the heavy security presence and organizing a protest against the Assad regime.

The security forces turned the corner, but the protesters had disappeared. The uniformed men slowed and looked around. There was no sign of their targets.

FROM SYRIA: Like it did for beer, Syria tries to rebrand its government

The watcher walked up to the security forces. The conversation was brief. He lifted his arm and pointed to the door behind which the protesters were hiding. As it was kicked down, three of the activists inside ran to the roof of the three-storey house, desperate to find an escape.

One of those three men who fled to the roof gave an account of the incident of July 29 in a lengthy Skype call with GlobalPost, having been introduced by a trusted activist in Duma. GlobalPost also spoke separately to an activist in Duma, known only as Sami, whose cousin was a second eyewitness to the incident.

One of the three men, GlobalPost’s source, ran to the edge of the roof and jumped the narrow gap across the alleyway to the adjacent building. By now the security men were on the roof and Jihad Shalhoub, 43, a second protester, had only one way off.

But Jihad stumbled as he ran toward the edge. He fell, but managed to grab a balcony banister on his way down.

In a video of the scene, supplied to international rights group Avaaz by activists in Duma, security men gathered concrete blocks and other heavy objects and hurled them from the roof.

“Jihad tried to jump, but slipped,” said one of the three men chased onto the roof. “The security men threw stones down at Jihad until he fell.”

As he lay injured and bleeding on the street three stories below, the security men on the roof continued to throw blocks down on Jihad, said both eyewitnesses. That night Jihad died of his injuries in hospital.

A second set of eyes, a second watcher — the cousin of the activist interviewed by GlobalPost — saw the whole incident from behind a curtain. A phone call was made to a leader of an activist network in Duma.

In nearly a half-century of one-party rule, Syria’s Baath regime has maintained its iron grip on a nation of 22 million people through a network of civilian informers known to Syrians are the awainiyya — the watchers.

FROM SYRIA: Impunity for state security

From the man at the next table listening in on conversations in the café, to the local shopkeeper, taxi driver or real-estate agent, Syrian society is rife with those who will inform on their fellow citizens to the security services.

The watchers do it primarily for money, said activists and analysts, but also out of fear. Others still believe in the ideals of the Assad family's rule.

It’s impossible to estimate the number of informers, but with the ruling Baath Party estimated at some two million members, and with at least 16 individual branches of the security services, the numbers of awainiyya at work in Syria could reasonably be estimated in the tens of thousands.

As the uprising against President Bashar al-Assad’s regime enters its sixth month, Syrian security services are relying ever more heavily on their network of informers to suppress protests, activists said.

“They tell the security forces about the movement of activists and protesters during demonstrations,” said Sami, the Duma activist whose cousin witnessed the attack on Jihad Shalhoub.

“When there are campaigns of arrests, the informers guide the security forces to the suspects’ houses wearing masks.”

Now, with Syria’s revolution transforming power relations in one of the world’s last true police states, protestors have adopted the radical tactic of using social media to fight back against the nation’s awainiyya.

Facebook now hosts dozens of awainiyya sites run by Syrian activists on which the names, addresses and even photos of suspected informers are posted. Residents of a neighbourhood can post the name of a suspected awainiyya. Site administrators said that they then monitor the suspect’s behaviour before officially outing them as an informer.

“Nizar Mahmoud cooperates with security and informs on the men of the revolution,” read one such site, called Syrian Informers and Traitors, in a warning to residents of the coastal city of Lattakia.

“He currently resides in al-Martqla, the street connecting the Omar bin al-Khattab Mosque and Sheikh Dahir, in front of Maher’s sandwich shop. He hides at home or in his car and records the names of young people.”

A person calling themselves Nour Nana wrote below: “Doctor Tarek al-Hares refused to save the wounded in the hospital in Homs.”

Mohammad Abu Khalaf, the Duma shopkeeper who told security where Jihad Shalhoub and the other protestors had hidden, seemed nervous as Sami and the men from the opposition approached his store.

“Please forgive me. May God forgive me,” he begged, falling to his knees, according to an account given to GlobalPost by Sami, who was present. “Don’t beat me.” Sami and his men did beat him, and destroyed his shop for good measure.

“Informers need to be punished,” Sami told GlobalPost. “It’s self-defence: When one of those informers report on a neighbourhood, the security forces raid it and arrest many people.”

The targeting of suspected informers has worried some activists, who want to avoid vigilante killings.

FROM SYRIA: The ghosts of Syria

“These awainiyya website pages are really bad,” said an activist with the opposition April 17 Youth Movement for Democratic Change, who asked to be known as Jawad.

“I have always been against disseminating the names of informers because they could be killed,” said Jawad. “We need to build our state. We have to depend on law in the future. We shouldn't do what our regime did for more than 40 years.”

HawkSyria is the nom de guerre one of the administrators of a website that outs suspected informers in the central city of Homs, one of Syria’s major centers of protest.

But some names on these sites appear to have been posted for other motives.

In an entry on an awainiyya website from Hama on June 23 a poster describing himself as Abu Nizar al-Homsi wrote: “I hope you will delete the name of Ahmed Hijo al-Rifai because most of the people are pretty sure that his name was put on the list for personal reasons," such as a personal grudge.

Another posting on a similar website for Duma reads: “The person who put these names,” the poster wrote, referring to a list on the website, “is an informer and a traitor, because this is not true. It is just an attempt to sow discord in Duma.”

“We gather information and confirm it,” he said. “Sometimes we depend on leaks from people inside the police and security forces,” he said. “Then we put them under surveillance, watch their moves, who they meet with, and we ask about them.”

Once satisfied that they have enough information, he said that they publish the names of the suspected informers and tell people to avoid them.

According to activists, the threat against informers is now felt so keenly that the regime has begun dedicating members of the security forces to protect informers from their fellow citizens, placing armed guards near their homes.

Those outing the awainiyya of Syria insist violence against them is never explicitly encouraged. But Sami, the activist from Duma, said such attacks can often be considered understandable, even excusable.

“When we see people taken from their houses who then die under torture in prison after having been informed on, it's not fair to judge people’s logic and what they do,” said Sami. “They are human and they are not all perfect.”

On the same Friday as Jihad Shalhoub fell to his death in Duma, in Harasta, another town near Damascus, security forces opened fire on protesters.

As the crowd scattered, Yasser, a 30-year-old protester, became separated from his friends, according to Jawad, the activist from the April 17 Movement who was at the Harasta protest.

When Yasser didn’t come home that evening, his mother and brother grew worried.

Yasser’s body was later found in some bushes in Harasta, his hands and feet bound, and his neck bearing the marks of strangulation, said Jawad.

“At first we thought security had kidnapped and killed him,” said Jawad. “Then a group from Rukn al-Deen, an area nearby, said Yasser was a shabeha [pro-regime thug] working with security forces... and they noticed him when they were protesting in Harasta.”

The Rukn al-Deen group has never admitted to killing Yasser. Jawad said he doesn’t know whether Yasser was an informer or not. Now, no one will ever know.