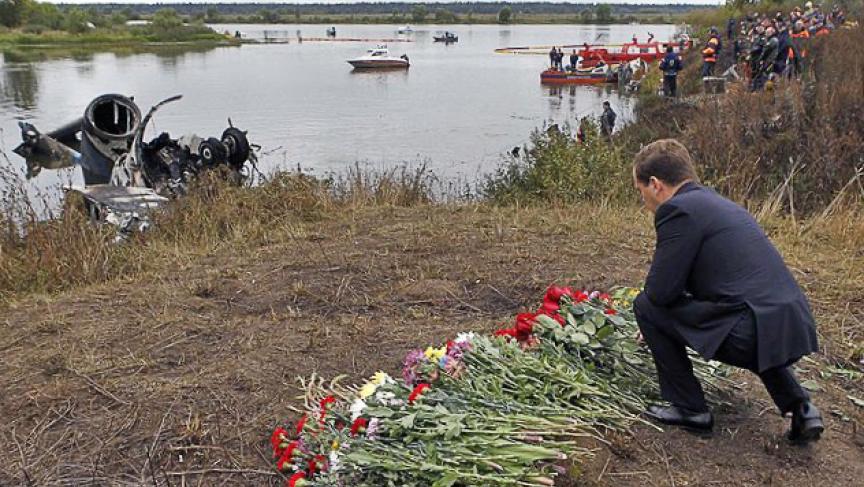 President Medvedev lays flowers and kneels in front of the remains of the rear stabilizer of the Yak-42 that carried the Lokomotiv Yaroslavl hockey squad. (Photo: Russian Federation, Wikipedia)

Hockey fans around the world are mourning the loss of nearly the entire squad of Russian ice hockey powerhouse Lokomotiv Yaroslavl in a plane crash northeast of Moscow on Wednesday. Thirty-seven players and coaches, representing 10 different nations, are among the dead. The roster included former NHL all-stars, Olympic champions and national team standouts.

A steady stream of Lokomotiv Yaroslavl fans laid flowers and candles outside the team’s home stadium all through the night. Many attended a church service in Yaroslavl on Wednesday that was held to honor those who had died.

Russian President Dmitry Medvedev visited the crash site in Yaroslavl, calling the accident “a huge loss for the whole country, and for all hockey fans.”

That sentiment was echoed by many in Yaroslavl.

“I think we have lost some wonderful people, some great players and sportsmen,” said a fan named Yelena. “It’s a great shame. It’s tragic.

Lokomotiv Yaroslavl is considered one of Russia’s top teams. It is not hard to find YouTube videos sporting the team’s red-white and blue colors, not to mention the signature sound of the locomotive.

Read more about the team on The World website.