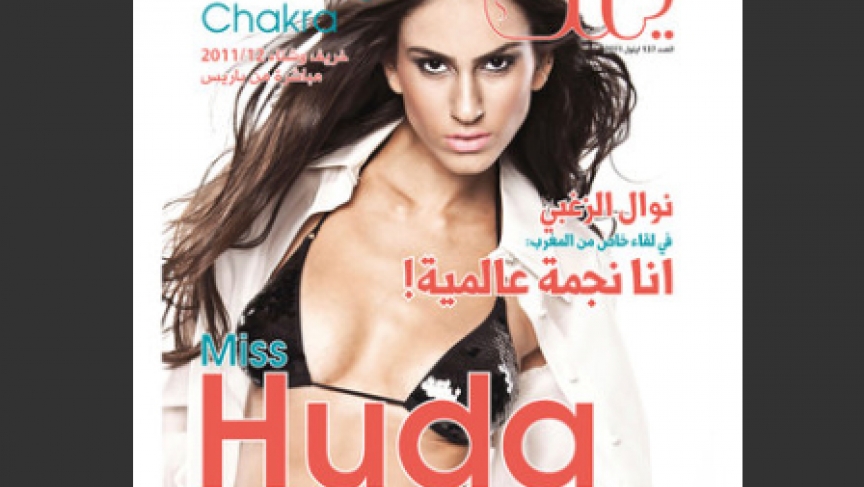 Story by Matthew Bell, PRI's The World. Listen to audio above for full report.

More than a decade ago, an Israeli Arab women's magazine called Lilac set out to break some taboos in conservative Arab society. The glossy monthly is about women's fashion, careers, health and – perhaps unsurprisingly – about sex.

The magazine has included plenty of photos of women in revealing clothing. But after all these years, Lilac never dared to put a model on the cover in a bikini. That is, until its latest edition.

For the cover, Lilac's editor Yara Mashour wanted to find a young, strong and sexy model: "a new Arab female." And she found that in 22-year-old Huda Naccache.

When Israeli TV Channel 10 did a recent story on Naccache, it focused on the "bikini issue."

The segment showed Naccache posing in a skimpy two-piece suit. Then, it cut to a segment with another Israeli Arab model and her mom. What do you think about Huda's bikini photos, the interviewer asked?

"No," the mother said as she shook her head in disapproval. "No, I will never let my daughter take pictures in a bikini."

There is a traditional belief in Arab society that a woman's actions can bring dishonor to her whole family. But Adeeb Naccache – Huda's father – says that he, his wife, and their relatives all support his daughter's career choice.

Naccache said he also encourages his daughter to work hard at university, where she studies archeology and geography. After all, even the most successful modeling career lasts only so long.

For her part, Huda Naccache said most of the feedback she has had from the Arab Israeli community has been positive, though she has been called some nasty things on occasion.

Some people, she said, "actually have a problem (with such modeling) and I respect it."

Lilac's editor, Yara Mashour, a 38-year-old, grew up in a Catholic family in Nazareth. For Arab Israelis of her generation, she said, the idea that young women should start planning for a career as soon as they finished high school was mostly a foreign concept.

When Mashour's father sent her and her younger sister off to college in the United States, she said, her family friends and neighbors were shocked.

"'How could they do that,'" she said people asked. "'You're sending your girls somewhere where you can't see them? Why? Leave them here so they can get married. In two years, they should get married.'"

"My father told us, 'I'm sending you to study and don't you dare look for a husband when you're studying,'" Mashour said during an interview at the Lilac office in Nazareth.

But Mashour said things have changed a lot. Younger Arab women are much more free to pursue careers of their own now. But they still have to fight ferociously for their rights, she added. And that is precisely the spirit Lilac magazine tries to capture.

Read the rest of this story and view slideshow of Huda Naccache on The World website.