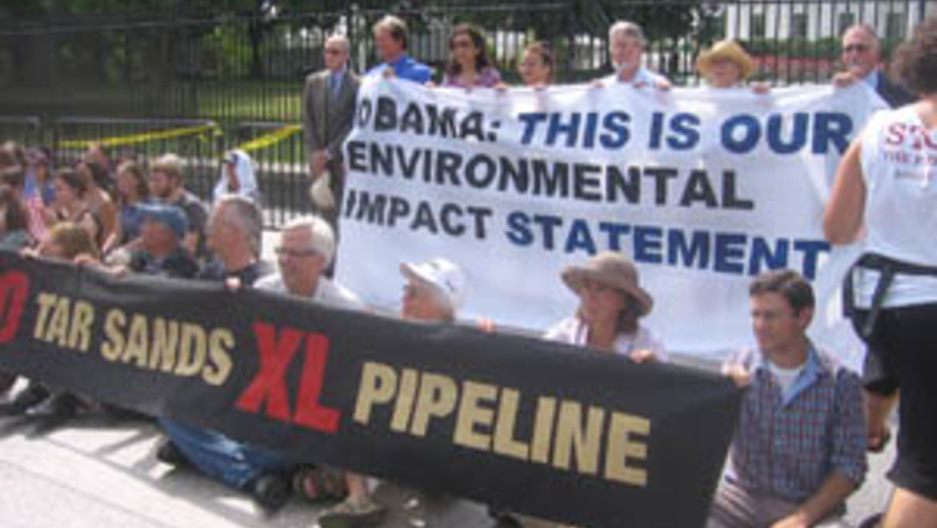 Photo of a Tar Sands Protest in Washington. (Image by Eric Niiler)

The Keystone XL pipeline project would ship oil from Alberta’s controversial tar sands to the coast of the Gulf of Mexico via the Midwest. The past two weeks has seen a remarkable parade of people -- from celebrities and religious activists to government workers and scientists -- protesting the project.

Since the Keystone pipeline falls under the jurisdiction of the State Department, President Obama, rather than Congress, will have the final approval on the project. And McKibben says Obama's decision will be remembered next year.

"Leaders of all the major environmental groups in this country, from the corporate friendly Environmental Defense Fund to the radical Greenpeace and Rainforest Action Network, joined together in a letter this week saying this is the environmental challenge between now and the election," McKibbon said. "And we expect nothing less than you will block this pipeline."

But Shawn Howard, a spokesman for Trans Canada, which is building the Keystone project, says the protesters are misguided if they think that stopping the pipeline will stop the flow of oil from what he calls the "oil sands."

Howard says the oil will flow whether or not the US buys it. In fact, some of it is already being piped to British Columbia. But he says what would be lost is about 20,000 badly-needed construction and manufacturing jobs, most in the US.

"We will begin almost immediately to put those 20,000 workers to work," Howard says. "Not only that, this is private sector money that is funding one of the largest infrastructure projects in North America, and there won't be any government money that goes toward this."

Transcanada already has agreements with six American unions to supply labor, and several have come out in support of the project.

Meanwhile Canada's ambassador to the United States, Gary Doer, says his country is working to make what supporters call the oil sands less damaging to the climate. And Doer says the pipeline will mean a more reliable source of energy for Americans.

"We believe that the oil sands in Canada have improved in terms of its environmental sustainability," Doer says. "In terms of environmental challenges, its true it represents a challenge for all of us. But it also represents an opportunity for energy security for both Canada and the United States."

Despite objections from the EPA, the US State Department released a report last week saying that the project passes environmental muster. So it's now up to Secretary of State Hillary Clinton to assess the merits based on national security needs, and make a recommendation to president Obama.

The environmentalists gathered at the White House have made it clear that their support for the president's reelection may hinge on his decision. But Georgetown University government professor Stephen J. Wayne says that greens lack the political and fundraising clout of the unions that would benefit from pipeline jobs.

Still, Wayne says, a decision in favor of the pipeline would have some political cost.

"The problem the president has to face with the environmental community is a problem not with them voting Republican," Wayne says. "Not when you have Republican candidates saying they don't believe in global warming. But you have to worry about them staying home."

The state department begins public hearings on the pipeline this month. A final decision is expected by the end of the year.

Here's what some folks on PRI's Facebook page had to say:

Alcides Sanchez: ‎20.000 jobs take it!! And once is done dont let the loonies enviromentals to use any of tha OIL to heat their crib or fuel ther cars.

Mary Ruth Quirk: I believe the response would be HELL NO! And I also believe that the intent of the oil is not for US consumption, just a quicker way to get it to the refineries and then off to lands abroad. Let's not be fooled - let's get all the facts before we do irreperable harm to a huge swath of our heartland's flora, fauna, soil and one of the country's biggest, most depended on aquafirs. This is such a bad idea on so many levels. There will be only one opportunity to get this right and that is for the Presient to say NO.

Anne Langley: Um well up here in Canada our biggest trading partner is you all. So My guess is that most of it would be consumed by YOU and then WE buy it back once it is refined. WE don't have many refineries for some reason so WE have to get alot back from YOU.....