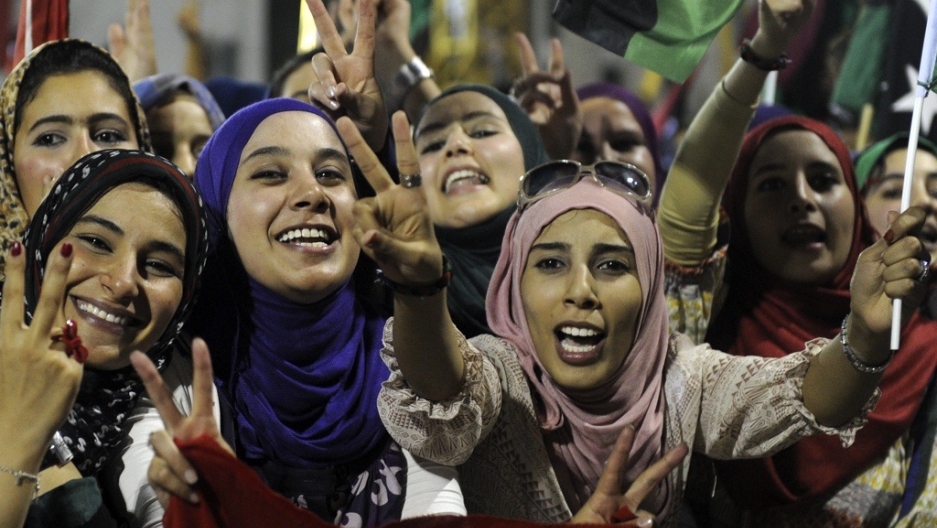 TRIPOLI, Libya — A sea of colorful headscarves filled Tripoli's Martyr’s Square on Friday afternoon. The crowd danced and sang, waving flags and balloons in the air. Joyful smiles beamed between cheeks adorned with painted colors of the rebel flag.

The crowd was almost 10,000 strong but there was not a man in sight. The women of Tripoli gathered to celebrate their freedom from an oppressive regime.

"I am 30 years old and this is the first time for me to stand in this square, and it is the first time I am free to talk to someone like you," said Arwa Mohammed Hassan as she waved a rebel flag above her head. "Before I was not proud of my country, but today I am so proud to be Libyan!"

Behind the scenes, women have played an unsung but crucial role in Tripoli’s revolution. Many have bravely spoken out and joined in the protests across the country.

Hundreds spent tireless hours preparing meals for the men on the frontline in makeshift kitchens. Others bravely smuggled guns and conveyed vital information from inside Gaddafi strongholds. Hundreds more nursed the wounded.

Today they gathered to show their thanks and support to the men still fighting to liberate the country.

“We have come here to motivate the men to find Gaddafi and finish this revolution,” said 20-year-old Anwar Mohammed Hassan who attended the event with her sister. “Before, we were confined to our houses. We lived in a closed community, but now everyone can feel and smell the freedom. We are changing everything. I can’t tell you how good it feels.”

In the square women danced and sang, "Please my God, let Gaddafi die this day." A young girl jumped up and down, balloons in her hand, singing the now famous sarcastic phrase, "sorry, scruffy hair." An elderly woman laughed and clapped as her daughter pushed her through the jubilant crowd.

In an outer circle surrounding the square, armed rebel forces stood guard. For several hours only women were allowed to enter. From a central platform, they told their stories. Some spoke of their lives under the old regime, others of their role in the revolution. Many spoke of a better future for Libya's women.

For Gahida Altwati, the day was an emotional one. Since 2007 she has been speaking out against Gaddafi, exposing human rights violations and oppression via the internet. For the first time she was free to shout her beliefs to a live crowd.

The previous day, Altwati took GlobalPost to Abu Salim prison where she was held for three months for her role in organizing anti-government protests that began on Feb. 17.

Standing in her former cell, tears welled up in Altwati’s eyes. Black mascara streamed down her face beneath a pink headscarf. As she grabbed the bars that had held her inside for so long, a flood of emotion overwhelmed her. A mix of painful memories and feelings of joy and victory brought a flood of tears.

"I talked to these walls and I promised them I would return when I am free — when Libya is free," she said. “Here I am! I win Gaddafi!”

Since 2007, Altwati had used social media, blogs, posters and the foreign press to draw attention to human rights abuses being committed within Libya. As a result she was slandered by state media. Her phone and computer were hacked. Personal photos of her without a hijab — scandalous in such a closed society — and private phone conversations were made public. Altwati and her family were threatened. Publically shamed she had to leave her home to live with relatives.

“Many people still say bad things about me because I am a woman and I spoke out,” she said.

On Feb. 11, Muammar Gaddafi requested a personal meeting with Altwati. She described him as composed and elusive, saying his face and mannerisms gave nothing away.

“He told me I was a great woman and asked me to work for him. He wanted to write his words with my pencil,” she said.

After refusing the offer and ignoring threats to stop campaigning, Altwati was arrested on Feb. 16 and secretly detained in Abu Salim prison.

She described the isolation, the separation from her family, and the screams she would sometimes hear in the night.

When she became ill, rather than transferring her to a hospital she was treated in the back of an ambulance within the prison grounds where she stayed for two days and nights before returning to her cell.

Finally on May 8, after threats from her mother to make Alwati’s arrest public, she was released and immediately returned to working against the regime, conveying information to the rebel forces of government positions via notes and coded messages.

When asked what possessed her to take such risks she said, “It must be in my genes. My grandmother took up a gun and fought in World War II alongside the men.”

Alwati said around 400 other women were held in Abu Salim for speaking out against Gaddafi and helping the rebels. In rebel held areas, dozens of women took up media positions to make their message public. Hundreds of others took on subtle roles in support of the men fighting on the front lines.

“Women played a big role in this revolution,” said rebel fighter Sofyan Al Shawesh. “They cooked for us, cleaned for us, worked as nurses even if they were not experienced. When we returned from the front they would call to welcome us back. They elevated our hopes and kept us strong.”

Under Gaddafi’s regime the role of women had improved in some areas. Greater opportunities for education, employment and political involvement opened up. Women received equal rights in property ownership and divorce. But Libyan society remains highly segregated and most women remain relatively isolated within their homes.

In his Green Book, Gaddafi wrote extensively about women, but failed to reach any real point.

“Women, like men, are human beings,” he wrote. “This is an incontestable truth ... Women are different from men in form because they are females, just as all females in the kingdom of plants and animals differ from the male of their species ... According to gynecologists women, unlike men, menstruate each month ... Since men cannot be impregnated they do not experience the ailments that women do. She breastfeeds for nearly two years."

The role of women within the Gaddafi regime has predominately been one of housekeeping and childrearing. However, women were encouraged to join the armed forces. Gaddafi famously traveled with a team of highly trained elite female bodyguards, often known as the Revolutionary Nuns. In the past week, five of these women bodyguards have claimed they were raped by Gaddafi and his sons.

Now as the revolution nears its end, many women are hoping for a brighter more inclusive future.

53-year-old Zara Mohammed lived most her life under the Gaddafi regime. She was 11 when he came to power.

“Gaddafi always talked about women’s rights, but we had no power, no voice, no freedom,” she said. "Now we are all free to talk about the things that are wrong in our community. We are free to discuss change. There is no one to keep us silent.”

As the night pressed on in Martyr's Square. The men came to join the celebrations. In a rare scene, men and women celebrated together.

Nuralhuda Belaid sat waiting for her husband at the edge of the crowd with her sister and neighbor.

"We are tired but happy," she said looking exhausted from a long night of festivities. "We have no water, no power, no phone connection, but the important thing is we have no Gaddafi!"