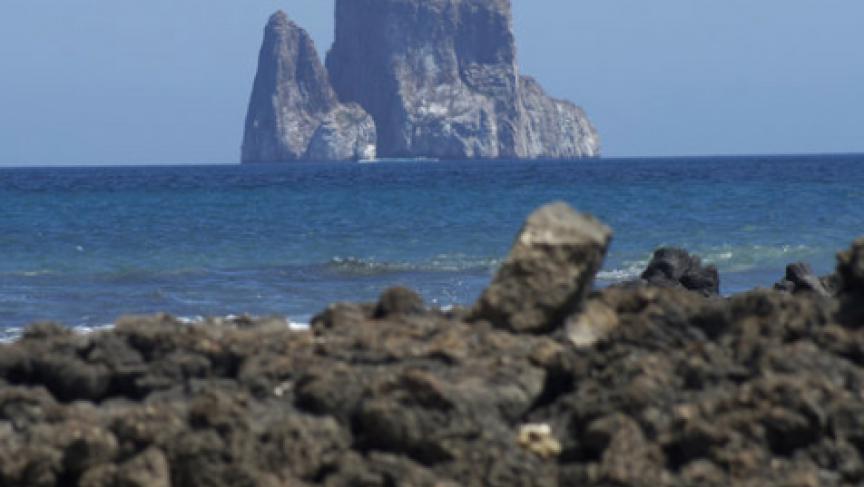 Kicker ROck is all that remains of an ancient lava cone. The Galapagos archipelago is a series of volcanic islands marked by diverse landscapes and geological formations. (Photo: Tony Azios, The World)

Story by Tony Azios, PRI's The World. Listen to audio above for full report.

Perhaps no place on earth is more closely linked to the theory of evolution than the Galapagos Islands. It was here, off the coast of South America, that Charles Darwin found evidence that new species can evolve through natural selection.

But these islands have undergone major social changes in the last twenty years, and a growing number of people who now call the Galapagos home do not believe in evolution.

“We base ourselves on the Bible,” says Esther Tacuri, a Seventh-day Adventist missionary. In front of the Adventist church on the Galapagos island of Santa Cruz, along bustling Charles Darwin Avenue, a large wooden sign reads: “In the beginning, God created the heavens and the earth.”

“We don’t believe at all that man came to be by sheer chance, or that man evolved from monkeys,” says Tacuri. “We really believe that God created man in the image and likeness of God.”

“It is said that this is the center of evolution, but in my experience visiting with people in their homes, I never hear them talk about it,” she says. “On the contrary, the people here are much more accepting of the word of God.”

This point of view represents a big change for the Galapagos.

Jack Nelson moved to Santa Cruz Island from the United States in 1967, when only a few hundred people lived here. He says back then many of the residents came from North America and Europe, and many had some involvement with biological research.

“The local people were much more in contact with visiting scientists,” he says. “The people who live here now overwhelmingly have come from a very different kind of history.”

Read the rest of this story and view a slideshow on The World website.