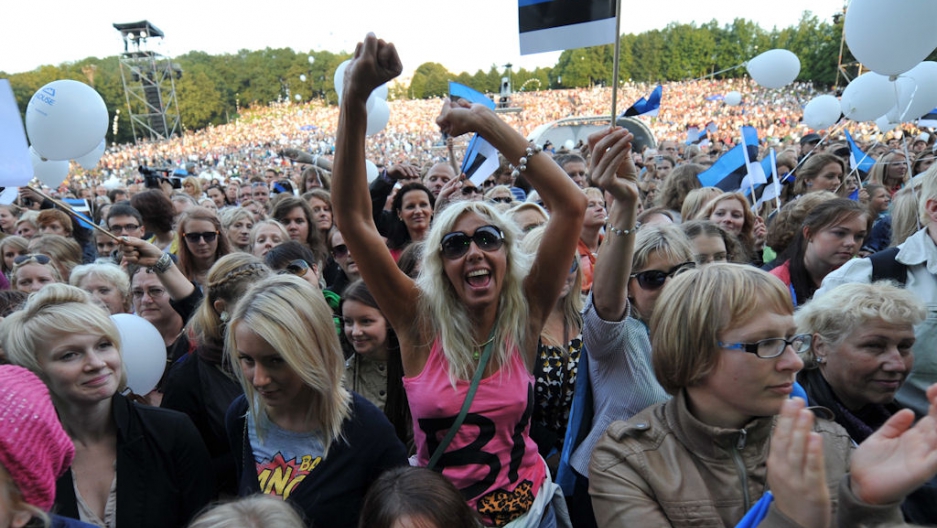 People wave Estonian flags as they attend the concert "Song of Freedom" held to celebrate the 20th anniversary of the restoration of independence of Estonia, in Tallinn on Aug. 20, 2011.
Credit: Raigo Pajula
Share

TALLINN, Estonia — This corner of the European Union is an exception to the economic doom and gloom crippling other parts of the eurozone. The three Baltic nations, Estonia, Latvia and Lithuania, look at their southern European partners now struggling with cutbacks and think, “we’ve seen worse.” According to an old Estonian pledge: eat potato peelings if you must and just get it done.

They did. This past weekend, luminaries gathered in Tallinn to celebrate the Baltic states’ declaration of independence from the Soviet Union 20 years ago..

“I remember the days when the counters of the shops in Tallinn were empty and the people were starving. The economy more or less had to be rebuilt from scratch,” recalled Swedish Prime Minister Carl Bildt, a longtime Baltic supporter. If you had asked people on Aug. 20, 1991 whether in 20 years “Estonia, Latvia and Lithuania would be seen as economic success stories in Europe, would be full members of NATO, full members of the European Union,” Blidt asked, “if anyone had said yes, that person would have been seen as a fairly likely candidate for lunacy.”

All three countries joined the EU and NATO in 2004. This week Fitch’s credit-rating agency released a report, “The Euro Area Crisis: Lessons from the Baltic States”, crediting the three with showing that “although it was painful to correct large macroeconomic imbalances and return to growth … it was not impossible."

“What has been achieved is nearly miraculous,” Bildt marveled, “if you look at it in a historical perspective.” That’s exactly how Baltic leaders look at it, but they’ve put in too much hard work to call it a miracle.

Estonian Foreign Minister Urmas Paet remembers gathering up heavy dictionaries — the only weapon he had in at hand — to throw at the Soviet tanks that were sent by Moscow to discourage an Estonian declaration of independence in 1991. At 17, he was old enough to resent the travails of daily life in the Soviet Union: Food rationing, the specter of punishment for speaking Estonian publicly, constant surveillance and intimidation by the authorities.

So when asked about whether he’s worried about the eurozone, which Estonia just joined in January, Paet suppressed a chuckle.

“These relatively small problems are manageable, they are doable,” he said confidently. “The background of the Soviet occupation was so hard, so difficult, so that the worries we see today in Europe, also in the eurozone, compared with the problems and fears and situations we have seen in Estonia just some decades ago, it’s nothing.”

Estonia has reason to crow. It has a debt-to-GDP ratio of 6.6 percent, compared to Greece’s 143 percent. Even Germany, Europe’s strongest economy, owes more than 83 percent of its GDP, while Latvia and Lithuania have respectable figures of 44.7 percent and 38.2 percent, respectively. In addition to having the lowest debt in the EU, Estonia’s year-on-year growth in the second quarter was the EU’s highest at 8.4 percent. Lithuania was second at 5.9 percent. The EU’s averageis just 1.7 percent.

Just two years ago Latvia suffered the worst recession in the EU; its retail sales dropped 30 percent in 2009. So Latvian Prime Minister Valdis Dombrovskis decided recovery required severe austerity, a gamble that led the International Monetary Fund to back him up with a loan package of 7.5 billion euros and that has allowed Latvia to restart the climb — with growth in the second quarter of 2011 up 5.7 percent over 2010 — but not without pain.

But everything has a price, and Andrew Wilson, an expert on the post-Soviet space at the European Council on Foreign Relations, says the Baltic countryside is paying for the region’s economic success. “The big question mark over their societies,” Wilson said, “is outward migration. Their population numbers are down. Economic success is very much focused on their capitals … it has sucked their rural regions dry.”

All three countries struggle with high unemployment, which is 13.8 percent in Estonia, 17.2 percent in Latvia and 17.3 percent in Lithuania. And the Baltic states are above only Bulgaria and Romania when it comes to the GDP per capita of EU members.

So it’s not so surprising, that not everyone is happy here. In the streets of Riga at Latvia’s Independence Day celebration, the dichotomy of views presents itself within the space of a city block. Nineteen-year-old Katrina Ulbeerte, bopping along with her younger sister, laughs when asked what she knew about Soviet times before she was born. In American slang, she said her parents have told her that life then was difficult. “They told about special lessons about, like, communists and, like, all kinds of military stuff. I’m happy I don’t have to go work in a factory!”

But 55-year-old Ieva Inauska, who couldn’t speak English but conveyed her thoughts quite clearly in broken German and hand gestures, doesn’t see much of a change. “Soviet Union? Bah. European Union? Bah. The European Union bureaucracy is even bigger than the Soviet Union’s!” And, she indicated, she preferred the latter.

Still, says the International Crisis Group’s Andrew Stroehlein, who in 1999 co-founded a magazine focused on the Baltics and other central and east European countries, “I think they deserve their ‘star’ status, particularly when you look at the rest of the former Soviet Union.” The Baltic states have more wealth and higher life expectancy than the average of former Soviet states.

Today, Estonia, Latvia and Lithuania do share borders, but little else with some of those still-restive former republics. Karl Altau, an Estonian-American who runs the office of the Joint Baltic American National Committee in Rockville, Maryland, says the Soviet occupation is still too fresh in their minds to feel completely comfortable, even with EU and NATO protections.

“The immediate threats, it is true, are not there anymore,” he acknowledged, but “at the same time, the unpredictability, dearth of democracy and obfuscation of history in the Russian Federation and Belarus make us uneasy.”

Still, in the most fundamental of ways, everything has changed. When asked the biggest difference in Estonian’s lives now compared to in 1991, Urmas Paet doesn’t mention GDP or purchasing power. His unhesitating answer: “absence of fear.”