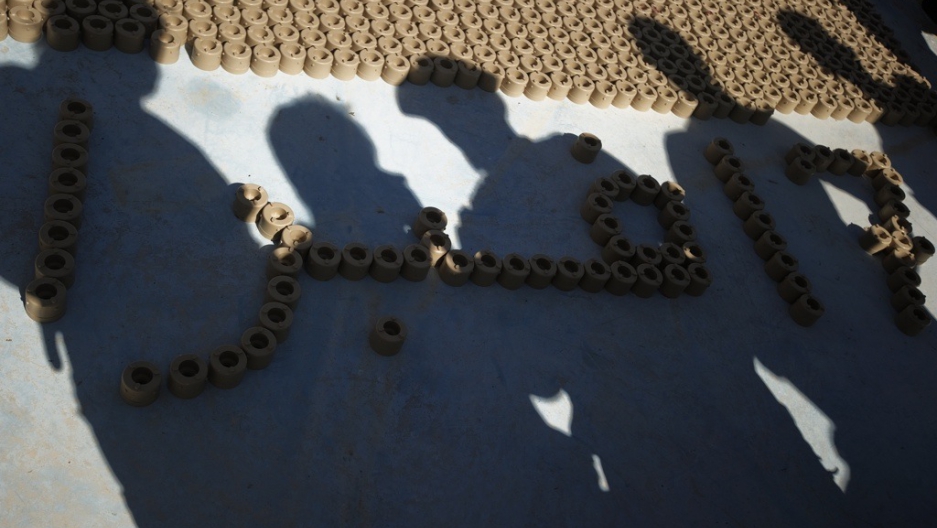 The shadows of Libyan rebel officers over hundreds of retrieved anti-personnel mines in Ajdabiya, on August 15, 2011.
Credit: Gianluigi Guercia
Share

AJDABIYA, Libya — With major combat operations in Libya's 6-month civil war starting to wind down in the east, rebels fighters living in this dusty battlefield city have turned some of their attention to the next big battle — cleaning up the mess that was left behind.

Rebels here are not yet focusing on the scores of charred tanks, armored personnel carriers, and other bombed-out skeletons of military vehicles dotting the desert highway in and out of this former front line in the conflict.

Those tasks will have to wait.

The immediate priority, according to rebel leaders and non-governmental organizations, is the thousands, or perhaps tens of thousands, of land mines and other unexploded ordnance still scattered across the desert sands in eastern Libya.

"It's extremely worrying, all of the bombs and munitions that are still lying around this area," said Yagoub El Fakhry, a rebel base commander in Ajdabiya. "And the land mines, you don't usually find them usually until it is too late."

Ajdabiya has been far from Libya's eastern battlefront for several months, but parts of the city still resemble a war zone.

Many of the low-rise concrete buildings are blown out, or covered in pockmarks from bullets and tank blasts.

Rifle cartridges and artillery shells, some spent and some live, are strewn about the streets and the surrounding desert. At the northern security checkpoint at the entrance to town, half of an unexploded NATO bomb greets visitors entering from the highway.

The most volatile unexploded ordnance still on the ground in Ajdabiya and neighboring cities was scattered after one of Gaddafi's nearby weapons stores was destroyed by NATO air strikes, according to the United Nations Libya Joint Mine Action Coordination Team.

Many Ajdabiya residents are worried about the threat.

"We usually go up the road to the beach or take picnics around this time of year, but I'm too scared to take my family off-road this year. The entire area is littered with explosives," said Ahmed Ardeiwa, 50, a resident of Ajdabiya, whose house was hit with a rocket during the fighting.

Land mines are another source of concern in eastern Libya.

Gaddafi loyalist forces, who pulled back to Sirte following the fall of their leader's Tripoli compound earlier this week, reportedly left thousands of land mines in the wake of their retreat.

Rebel fighters also planted some defensive land mines near Ajdabiya months ago, according to reports.

The U.N. demining team in Benghazi had no estimate of the number of land mines in eastern Libya, other than to say, "the situation is very bad."

Rebels believe the number could be in the tens of thousands.

Jasser Jamal, 19, an infantryman returning from the rebel front lines in the east, currently near Ras Lanuf, said that the mine squad in his unit found 750 anti-tank mines around Brega last month — in an area under a square mile.

Many of the bigger explosives, said Jamal, were buried under anti-personnel mines to make them easier to trip and to "double the bang."

So far, only three non-military injuries from land mines have occurred in Ajdabiya since the start of the uprising in February, according to staff at the only hospital in town.

But doctors here, as well as local NGOs, are preparing for the worst once the war is finally declared to be over.

"We know of some deaths, but we're expecting many more when the conflict fully winds down, especially among children," said Sarah Marshall, a representative of the U.N. demining group. "Kids see shiny objects on the ground, and naturally reach out for them. Plus, you can't just leave a school with a grad missile sitting in the parking lot."

In the east, the rebel military has begun clearing land mines and unexploded ordnance in the desert battlefields. Around 2,000 pieces of explosive were collected near Ajdabiya last week alone.

But most here agree that the contamination in places like Misrata and the western Nafusa Mountains could be even worse.

And removing the land mines requires expert training — and a lot of money.

The sapping team, he said, did not have adequate protection — typically very expensive bomb-blast suits and boots.

"We found four of Gaddafi's old demining vehicles, but our troops don't know how to use them, said Abdel Jawad, who is coordinating with international demining NGOs in Benghazi. "We also need detectors and protective clothes to do this right."

Leaders in the "new Libya," as rebel are starting to call the post-Gaddafi era, certainly have a tough task ahead of them.

In addition to the recent war, Gaddafi's regime placed millions of land mines along Libya's eastern and southern borders with Egypt and Chad.

There are also millions of unexploded remnants still leftover from World War II on Libya's northeast coast — many just as active and deadly.

"We need more money to clean all of these areas," said Abdel Jawad. "We can't even afford the explosives needed to destroy the land mines
once we find them all."