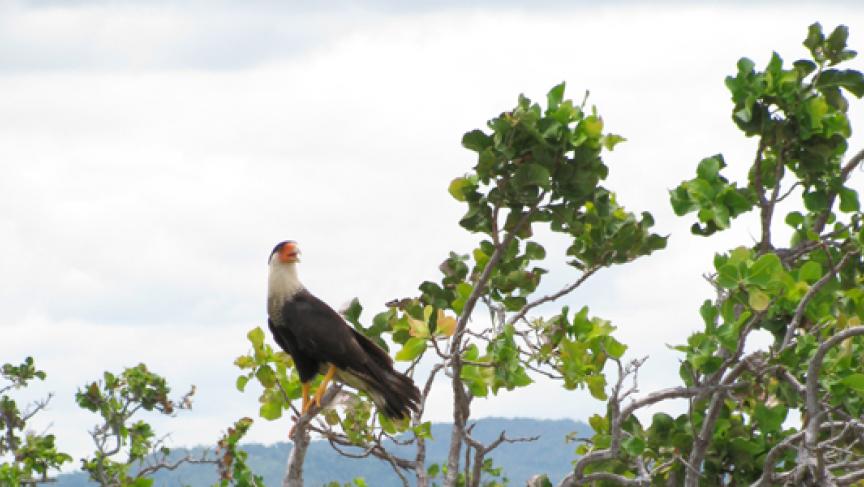 Share
Aishalton, Guyana, is a dusty savanna town on the edge of tropical forest. Like many indigenous communities in and around South America's Amazon Basin, it's a village in transition. Most of Aishalton's 1200 residents are members of the Wapishana tribe, but Christianity is modifying traditional beliefs. Young people are leaving to find work in the cities. Many families here rely on wild game for food, and the way they hunt is changing. "You don't have the arrow and bows only, but you have the shotgun," says Kid James, the deputy toshao (town leader) of Aishalton. James says the reasons to hunt are also changing. "Instead of hunting to feed your family, you'll be hunting to sell." James fears that over-hunting could become a problem. That is one of the reasons the town undertook an unusual collaboration with an international team of scientists. A few years ago, Aishalton learned that the scientists were working with indigenous communities to conduct a census of wild animals. "We thought that the project can help us to put information into perspective to plan properly of how we utilize our resources," says James. So the village leaders invited the scientists to work in Aishalton. The head scientist — ecologist José Fragoso of Stanford University — has studied animals in the Amazon for decades. He then realized he also needed to understand the people. "We were trying to understand, as these communities are transitioning, what is it that's lost and what is it that's gained," he says. Fragoso wanted to know how cultural changes among the humans ripple through the forest — how they affect the animals that live there. Fragoso and his team pursued that question on a massive scale. Their study spread across 20,000 square miles in Guyana. The researchers hired hundreds of local people in dozens of communities to gather data. Now, after years of work, the results are in. Fragoso recently returned to Aishalton to share what he learned. He met with people who had helped with the project in Aishalton and surrounding villages. The group settled quietly onto wooden benches in a thatch-roofed pavilion. Fragoso and his team presented a set of atlases. They were glossy, magazine-sized booklets of maps and graphs. Each atlas contained information customized to a specific village, using data collected by that community's own residents. There were demographic details, like how many people left the village for the city. Charts showed how much wild meat each village hunted, and maps showed where the animals were killed. Other maps displayed the villages' "titled lands" — tracts granted by the government, something like Indian reservations in the United States. Fragoso wanted everyone to see that these lands represent only a portion of the area the villages really use. "Look at the hunting area, and look at your titled land," he said. "See how much of your hunting goes [on] inside and outside." A lot of hunting occurs outside the titled lands. That is not illegal, but it is insecure. Outsiders could develop those areas for mining, logging, or ranching. Some villagers hope the atlases will help convince the government that they need more titled land. "What is inside here can actually help us to educate non-indigenous and policy makers," says deputy town leader Kid James. Town leader Christopher James — Kid James's uncle — says the atlas can also educate indigenous people in the village. For instance, he was surprised to learn how much wild game the village hunts. "I think we should not stop, but kind of ease on the use of wild meat," he said. "By holding meetings or workshops, we could let our people know that… we do not want you to kill out the bush deer or the savanna deer or the tortoise or the turtle." José Fragoso, the scientist from Stanford, arrived in Aishalton unsure of what the locals would think about the atlas. He left amazed by the response. "They were floored that they can use this to begin making plans," he says. "We really did something meaningful here." Fragoso hopes to return to Aishalton for future research. But after the village meeting, he had other places to go. He got into his muddy pickup, its back seat stacked with atlases. He began the rough drive toward another meeting in another village, leaving Aishalton to ponder its own next move.