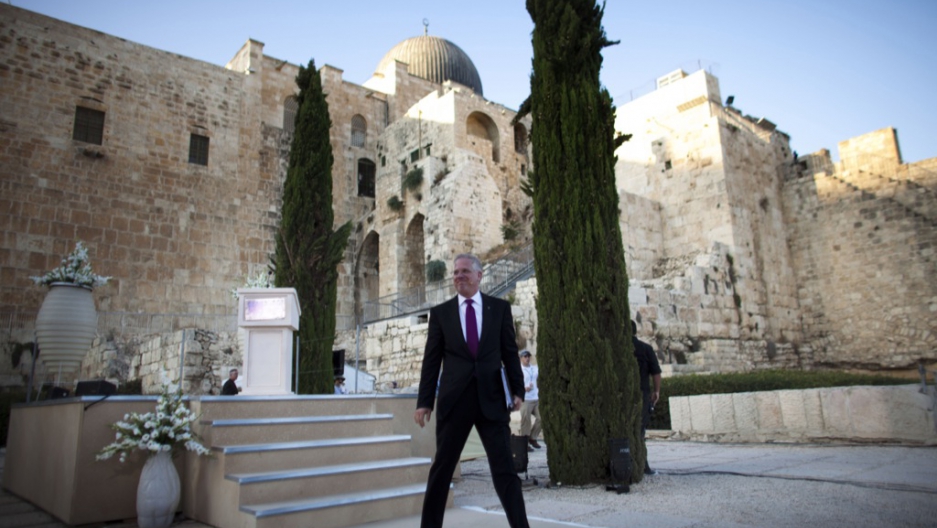 JERUSALEM — House speaker John Boehner banned members of congress from attending Glenn Beck’s rally-cum-religious revival next to the Wailing Wall, in Jerusalem’s Old City, but Republican presidential candidates can do as they wish.

So if anyone was wondering what happened to Hermann Cain after his disappointing showing at the Ames straw poll, one had only to look toward the Holy City, where he was enjoying center stage with Glenn Beck at the final of three events set in Israel.

Under the aegis of “Courage to Stand,” Beck addressed a fairly sparse crowd of 2,000. Also on stage was Jerusalem Mayor Nir Barkat and cantorial music superstar Dudu Fisher, who sang the Fiddler on The Roof’s version of a Sabbath psalm.

A hodgepodge of opponents weakly demanded that Beck go home. Leftists condemned his anti-Islamic views whereas religious Jews decried the un-Jewish character of his extravaganza being held so close to the Temple Mount. Former left-wing member of Parliament Yossi Sarid published an Op-Ed entitled, “Glenn Beck, Don’t Come Back.”

Beck, who appears to be drawing smaller crowds since leaving Fox News, ignored his detractors.

“He’s a guy who shares the beliefs of Christian Zionists throughout America,” said Zev Chafets, author of “A Match Made in Heaven: American Jews, Christian

Zionists, and One Man’s Exploration of the Weird and Wonderful Judeo-Evangelical Alliance,” and “Rush Limbaugh: An Army of One.”

Those beliefs, he said, are rooted in Genesis 9:12: “I will bless those who bless you and curse those who curse you.”

Nonetheless, Beck has a spotty history with Jews. In the not-so-distant past he accused the financier (and Holocaust survivor) George Soros of collaboration with Nazis, and in a similar vein, referred to the children murdered in the recent terror attack in Norway as akin to Hitler Youth. In addition, he authored a strange novel blaming the attacks of 9/11 on a sniveling public relations executive based on the real life Edward Bernays, an American pioneer in the field of publicity and a nephew of Sigmund Freud.

Now Beck looks poised to claim the mantle of pro-Israel Christianity, which was previously championed by Jerry Falwell and Pat Robertson and is now held by the Rev. John Hagee, who accompanied Beck to Israel.

“I think this is positive for Beck, because I think he wants to be the head of this parade when Hagee dies,” Chafets said. “He’s the prominent figure out there right now. He is reinventing himself as a religious leader, not a media figure. He is placing himself at a very advantageous spot. And at the same time, he is doing something very good for Israel.”

In the audience was Ronald Wiltsey, a Sarah Palin fan from Texas, who came to Israel with Beck along with his mother, Emma Caldwell, 76, and his uncle, Sam Miller, who is 68.

“I’m a history buff,” Wiltsey said. “I don’t agree with what we normally get back home about the Israelis. This is the land given to the Jews.”
Wiltsey, 52, spent 23 years in the army and is veteran of Desert Storm. “I did not get a good impression of Islam,” he said. “I’ve been through a lot. This is easy street now. This is a great trip.”

Before heading to South Africa and South America, Beck wrapped up his Israeli sojourn with an invocation, “We pray for the peace of Jerusalem. We have abused our positions and show no love for others. We are here to say, Israel, the Holy Land, you are not alone. ... May God bless Israel, may God bless the Palestinian people, may God bless the United States of America. Amen.”

Two days before the rally, a uniquely Jerusalemite commotion threatened to do away with the musical accompaniment altogether. Eli Yaffe, the choirmaster and conductor of the Great Synagogue’s Choir, which was to accompany Fisher for the Israeli national anthem and other tunes, grasped the Christian nature of the event and hastily backed off. With him went 16 performers, all of whom are to sing at the synagogue’s High Holy Day services next month.

It then fell to Meir Briskman, a young acolyte, to improvise a replacement group with hours to go. One of the bass singers on stage with Beck was Steven Timoner, 39, a graduate of the Yale Conservatory and a Chicago native who is now married to an Israeli and living in Jerusalem. He made $500 for the gig. From his perch, he could see that people gave Beck “scores of standing ovations.”

“I think he gave a decent speech,” Timoner said, smiling. “Look, it was very good. It was coherent. He had a real message. It was nothing like seeing him on TV, where he’s just, um, a moron.”