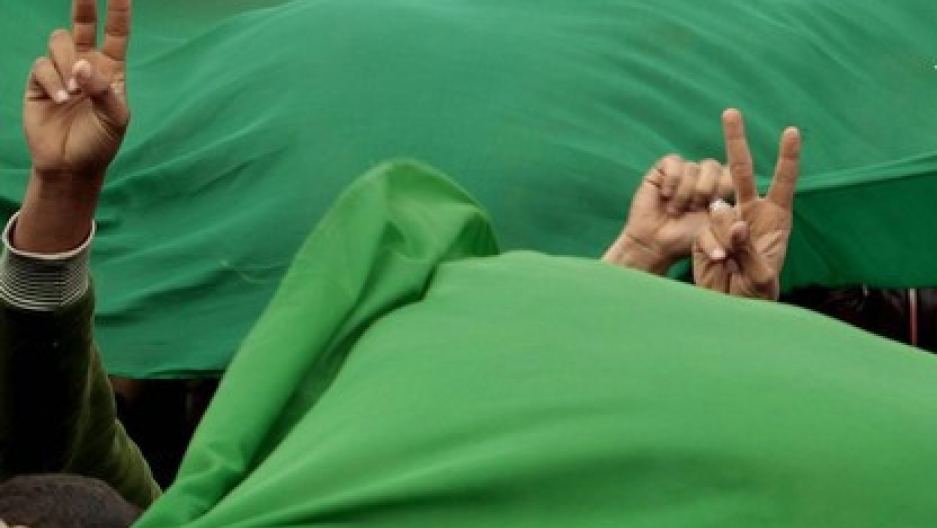 Protesters flash victory signs next to a Kingdom of Libya flag during anti-Qaddafi demonstrations in Benghazi on March 4, 2011. On August 21, rebels took the capital city of Tripoli. (Photo: Flickr user BRQ Network)

After months of rebel uprisings and NATO air assaults on Col. Moammar Gadhafi's regime in Libya, rebel forces reached a major breakthrough this weekend. Advancing to just seventeen miles outside Tripoli, the rebels pushed through the city’s outer defense lines, flooded into the capital and battled with Gadhafi loyalists last night

The rebels captured two of Gadhafi's sons, including Seif al-Islam, the assumed heir-apparent. Gadhafi, according to varying reports is either in hiding in a well secured compound or possibly already in exile in Algeria.

Civilians celebrated in the streets over what may be the end of Gadhafi's 42 years in power of Libya.

In an official White House statment last night, President Obama said, "The surest way for the bloodshed to end is simple: Moammar Gadhafi and his regime need to recognize that their rule has come to an end."

Jonathan Head, reporting for the BBC from the rebel stronghold of Misrata, in eastern Libya, says rebels are still battling pro-Gadhafi loyalists for control of the road between Misrata and Tripoli. "Once these two cities are joined together, then I think they'll feel they really have consolidated their grip on the country," Head said.