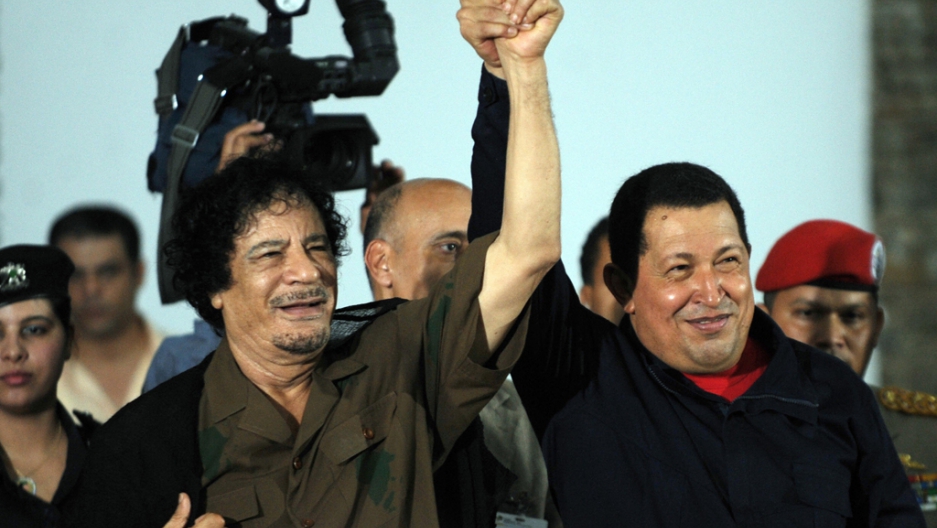 It’s always nice to see dictators sticking up for each other.

Hugo Chavez, the president of Venezuela, has come out in support of embattled Libyan leader Muammar Gaddafi.

To be fair, they both have a lot in common. They share a protracted hatred of western powers generally, and the United States specifically. Both countries are awash in oil. Chavez set up a program to distribute heating oil to poor Americans. Gaddafi has shared his largess with African nations, building mosques and investing in other projects. Both men are infamous for their painfully long public speeches.

They’ve also built up cults of personality: Chavez calls his style of governance chavismo, named for himself, and likes to appear in public wearing his signature crimson beret. He has a penchant for dancing on his personal television show, a largely unscripted affair. Gaddafi, meanwhile, refers to himself as the King of Kings, sleeps in tents when he travels and has a bevy of female bodyguards who are almost as famous as he is.

Over the weekend, Chavez, who is battling cancer and preparing for a reelection battle next year, took time to appear on national television to vent about what he saw as NATO’s interference in Libya.

“Today they dropped I don’t know how many bombs, and they’re falling in a shameless and open way... on schools, hospitals, homes, work places, factories, farm fields at this very moment,” Chavez said, according to the Associated Press. “It’s the excuse to intervene and seize a country and its riches."

As of Monday morning, it was unclear where Gaddafi may be hiding—or heading—amid the rebel’s assault on Tripoli. But Venezuela is on the list of possible havens. If the King of Kings comes knocking, it seems like he can expect a red-carpet welcome.