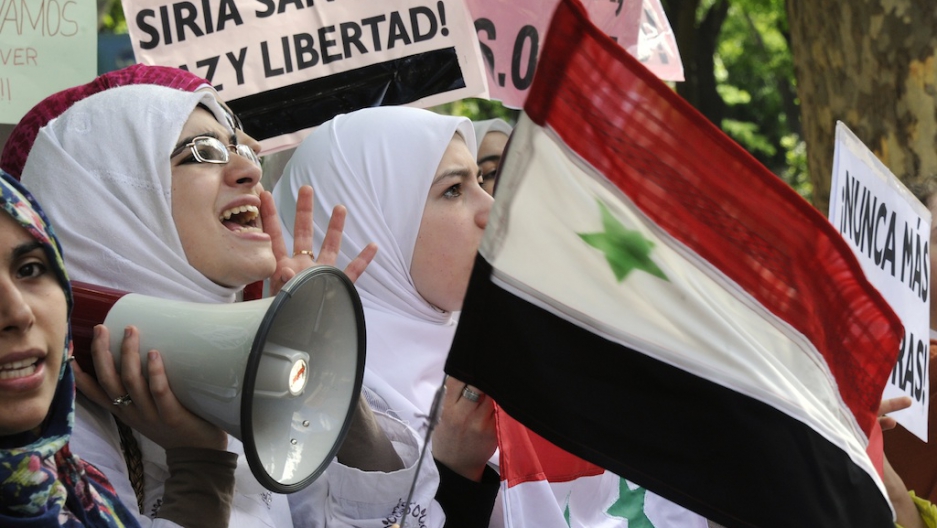 Demonstrators protest against the bloody crackdown by the regime outside the Syrian embassy in Madrid on April 24, 2011.
Credit: Dominique Faget
Share

I’m struck by the tenacity of the Syrians in casting off fear. The Syrian people have abandoned fear. Every day people are killed and people keep coming out again and again, showing tremendous commitment and disciplined fearlessness.

It would be very easy for the regime to stop the brutalities just by pulling the troops out and stopping the repression of the population. Negotiations are not wise for the resisters. I don’t know of any cases of a peaceful negotiated transition that led to the collapse of the regime.

It is not wise to start a new struggle by picking a specific method, such as a sit down in a square and think that is the way of bringing down a dictatorship. You have to analyze the situation competently and develop a grand strategy, as discussed in my book “Self-Liberation.”

That includes identifying the sources of the regime's power, how they are provided, and how to remove them. What are the institutions and sections of society that provide them, serving as "pillars of support?" They are like the legs of a table. As long as those legs are strong you can bump the table as much as you like but it won’t collapse. But if the wooden legs have been eaten by termites, even a small bump will cause the table to collapse.

The international community should not be doing too much because they may think militarily and the main problem is internal. People living under repression are often looking for someone else to save them. But it’s really the people inside the country who can liberate themselves.

Saying an oppressive regime has lost its legitimacy is good, but the question is what needs to be done after that? In Libya the control of the revolution was taken out of the control of the nonviolent groups and placed in the hands of violent groups. In a certain situation Libya's rebels chose to fight the Gaddafi regime where it is strongest, but they did not have enough military force to do so effectively.

They had to depend on outside military forces that are made available conditionally by outside powers. The control then goes to the outside governments, not the Libyan people. If the rebels had stayed with nonviolent struggle instead of fighting Gaddafi they would likely be in a far better position than they are in now. Now, if the violent forces against Gaddafi succeed, the regimes and organizations that provided them will be in a position to exert control, not the Libyan people.

Can the people continue until the collapse of the oppression? The question really is how strong are the people? Do they have their own institutions and organizations that have survived despite the regime? Can they form new ones to meet social needs at a local level and focus on increasing the power of nonviolent struggle?

If the population is not strong enough to cast off the regime at the present point then the population and their institutions need to be strengthened. That’s where the real power is that is going to bring liberation.

It happened in Communist Poland where the regime controlled so many institutions and there were no independent trade unions. So the people went outside those party-controlled organizations and set up their own Solidarity movement. Solidarity had the capacity to wield power and to organize strikes. Other parts of the society organized independent institutions also. There was more repression but they persisted and finally the Communist dictatorship was swept away. That took them 10 years, but they did and a new political group cannot take away their victory.

In the Hungarian revolution of 1956 it was the same kind of situation. It was a nonviolent revolution in which people were able to organize popular defiance that took power away from the Communist regime. Newly self-reliant workers and other people formed new democratic institutions, worker councils, peasant councils, student councils and more. Those were able to wield great power and create a substitute government within weeks. Then the Hungarian army came to the side of the revolution. The armies of the Soviet Union and allies, as was predictable, crushed the Hungarian army and the revolution was basically over.

In the midst of a nonviolent revolution, the members of the army and police at times may change sides when they see the writing on the wall. When they see their aims to advance economically by serving the regime goes against their longer term self interest, and serving the regime starts to look like it is harming their economic and political interest and even their survival. But when their loyalty shifts they need to accept the policy of nonviolent struggle.  Attention is needed well in advance to how people who served the dictatorship who shift sides are to be treated.

In several Arab countries the outburst of defiance against these regimes appears to have come quite quickly. However, the outburst more likely is based upon years of discontent, years of injustice and silent suffering. A minor event then occurred, as in Tunisia, which triggered a release of great frustration in solidarity, sharing of anger and defiance on the street and throughout the whole society.

Nonviolent struggle has certain characteristics. We now know what they are. People are expressing their opinions in symbolic actions for all to see. They are refusing to do as they are told and conduct economic and political strikes. They refuse to submit in passivity. They are doing what is forbidden and organizing themselves institutions of people power.

This is not all new. For thousands of years people have done this kind of thing, but often without fully understanding what they were doing. Their victories have often been later ignored or erroneously credited to violence. The idea that regular people could shape their own reality has been often shocking to the very people who did it. That idea has been recognized as dangerous by those who command the institutions of oppression.

Nevertheless, people continue to defy tyranny, despite threats, torture, mass killings, hunger and indoctrination. Sometimes a new leader who has pointed the way to self-liberation has been almost deified, as has been Mohandas Gandhi. But it is rarely noticed that Gandhi was no inventor of a technique of liberation. He revealed what he had learned from Russians using the general strike, the Chinese and Irish using the economic boycott, Africans refusing to carry passes and pay taxes, Englishmen who disobeyed religious officials, and others. And he could think strategically, how to act most effectively in a conflict to achieve a goal.

Since Gandhi's time we continue to learn more about how to apply this technique effectively. Syrians have apparently learned what the nature of this kind of struggle is and wisely refuse to play into the game of violence, which will help the oppressive regime to win.

Many people would have thought what they are doing to be impossible. Now the Syrians are demonstrating that they are a people writing part of the history of liberty throughout the world. Final victory is not yet won but that unlikely result is still possible.

Extreme dictators are never as powerful as they tell you they are. Their systems also have weaknesses regardless of what the so-called experts tell you about the power of these regimes and the weaknesses of their victims. Those experts don’t understand the power realities, how power and politics really operate in crises.

Political power has sources that can be identified. Those sources of power come from the people and institutions of the society. Legitimacy comes from the population who accept that the ruler has the right to command. The ruler has officials and administrators because of the people who operate the administration and bureaucracy. People and institutions operate the economic system. The ruler's final source of power is sanctions, punishments, including imprisonments, torture, and the tools including the secret police, enforcement officers, and military organizations.

A dictator was born a squealing infant as all babies are. He is a plain, ordinary person except for the power he is given. All the power he employs comes from outside his physical person. Those sources can be identified and cut off, even the institutions of repression.

Soldiers sick of serving this regime can start to shoot over the heads of people, or even mutiny. That is how the Tsarist system was brought down in Tsarist Russia. They must give soldiers all the reasons for deserting, for they are in a very difficult position. The demonstrators must be very careful not to use violence against soldiers.

That happened in Russia in December 1905 when the army was on the verge of full mutiny. But the Bolsheviks and others began shooting at soldiers during a general strike. The loyalty of the army was restored and the revolution collapsed. The tsarist system was preserved for 12 more years.

The regime will place people pretending to be demonstrators to kill members of the military forces of the regime to blame the resisters. The presumed secret Syrian plan to defeat the present revolution includes that instruction. Under attack and with a threat to their lives the soldiers will then carry out the dictatorship's orders and the regime will be given a new lease of life.