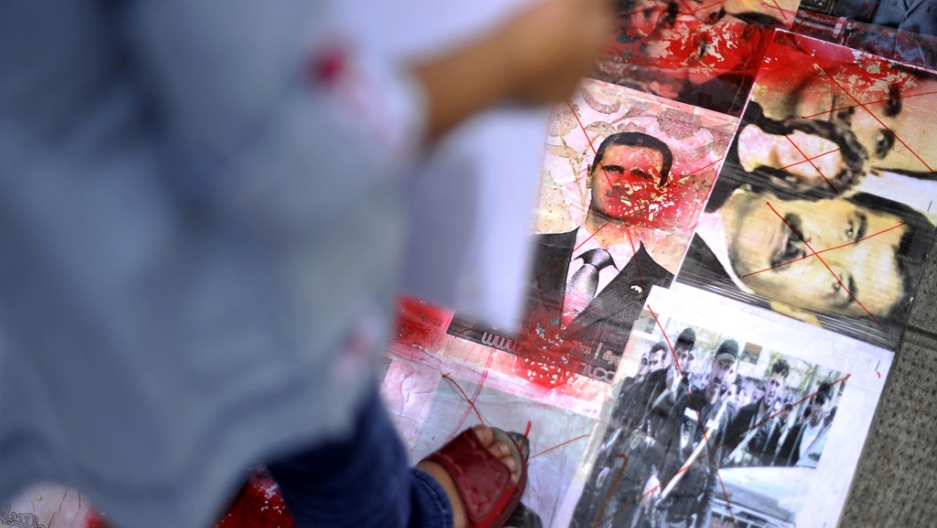 A child, holding a placard, stands on pictures of members of the syrian government including President Bashar al-Assad (C) during a protest gathering activists, including Syrians living in Switzerland opposed to the syrian regime in front of the consulate on August 12, 2011 in Geneva. Syrian forces launched assaults on flashpoint areas, killing at least two people as they pursued a crackdown on dissent ahead of expected mass protests after Ramadan Friday prayers. AFP PHOTO / FABRICE COFFRINI (Photo credit should read FABRICE COFFRINI/AFP/Getty Images)
Credit: FABRICE COFFRINI
Share

“The US and European position now is consistent with the explicit demand of the Syrian people to overthrow the president,” Omar Idlibi, spokesman for the opposition network Local Coordination Committees (LCC) told Global Post.

“Now we can say the international community started to take responsibility for the crimes committed by the regime. They have lost confidence in the man they gambled on for five months.”

In a written statement released by the White House, US President Barack Obama said Assad had failed to follow through on promises to reform and instead escalated a brutal crackdown on pro-democracy activists that rights groups say has killed over 2,000 civilians since mid-March. The regime argues it is battling an armed insurgency and that several hundred members of the security forces have died.

"His calls for dialogue and reform have rung hollow while he is imprisoning, torturing, and slaughtering his own people," Obama said. "We have consistently said that President Assad must lead a democratic transition or get out of the way. He has not led. For the sake of the Syrian people, the time has come for President Assad to step aside."

It was the administration's first explicit demand for Assad to step down and was accompanied by an executive order freezing all Syrian government assets in the US and targeting the country's lucrative energy sector.

The move was coordinated with the United Nations and with US allies in Europe and the Middle East and followed an intense diplomatic campaign to increase pressure on Assad.

The EU’s foreign policy chief Catherine Ashton issued a statement describing “the complete loss of Bashar al-Assad's legitimacy in the eyes of the Syrian people and the necessity for him to step aside.” However, the EU representative stopped short of announcing a ban on imports of Syrian crude oil, which activist say help directly fund the regime’s brutal crackdown.

“Europe must go further and cut off Assad’s financial supply line of selling oil into Europe by introducing sanctions when they meet in Brussels tomorrow,” said Wissam Tarif of the global campaign organization Avaaz.

British Prime Minister David Cameron, French President Nicolas Sarkozy and German Chancellor Angela Merkel issued a joint statement saying that Assad should "leave power in the greater interests of Syria and the unity of his people."

LCC spokesman Idlibi said the calls for Assad’s fall would bolster the confidence of ordinary Syrians in the international community and its institutions and stressed the opposition wished to build Syria as “a state of citizenship for all Syrians, a civil republic not for one person or one party but from different ethnicities and sects and different ideologies and political opinions.”

Following up on President Obama’s statement, Secretary of State Hillary Clinton assured Syrians the US had no intention of intervening directly in their country, a long held position across the opposition. "We understand the strong desire of the Syrian people that no foreign country should intervene in their struggle, and we respect their wishes," Clinton said.

Overall it was a stunningly bad day for the Syrian president, notable among many.

Also Thursday, a high-level UN human rights team in Geneva said that Syria's crackdown "may amount to crimes against humanity" and should be referred to the International Criminal Court. Jordan's foreign minister said Thursday that his country is "angered" and "extremely worried" by the killings of civilians in Syria and Switzerland recalled its ambassador.

Earlier Thursday, Assad had informed UN Secretary General Ban Ki-moon that all military and police operations had stopped, a move dismissed by the opposition as an attempt to sow division among members of the UN Security Council which is due to hold a session on Syria.