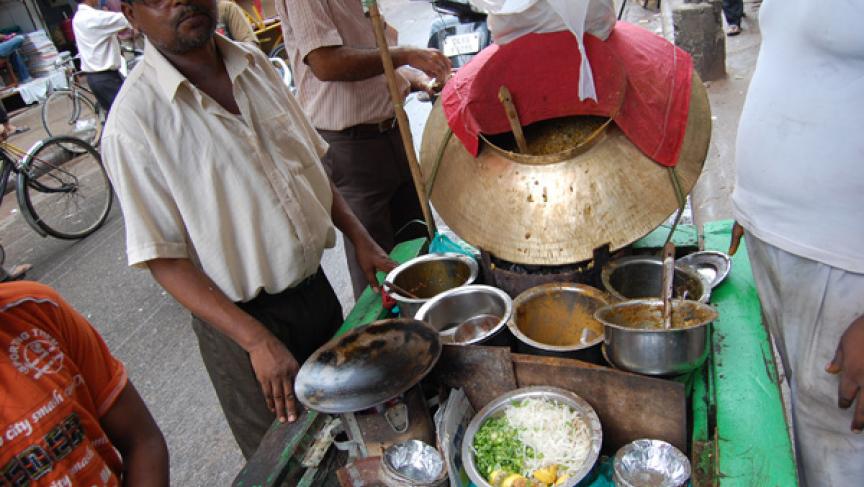 Share
by Elliot Hannon At a small corner stall in the Old Delhi neighborhood of the Indian capital, a satellite dish sized pan sizzles with jalebis, a deep fried Indian sweet. In India, such home-grown delicacies are served everywhere from 5-Star hotels to roadside stalls. For many, small street carts churning out meals on gas burners is part of their daily eating experience. Everything that you put in your mouth in India, however, is up to snuff, according to the Indian government. To improve food safety on farms and on table tops, a new law went into effect last week to make eating safer. In Old Delhi, the promise and the problems of the street food tradition are on full display. "Old Delhi could be called, in terms of food, the wild wild west on steroids," says Sid Khullar, a food commentator and founder of the blog ChefAtLarge. "I don't think there's any kind of checking happening there and it's possibly one of the filthiest places to eat at. But it's also one of the places where you get the tastiest food in town." The street food would go down a lot easier, says Khullar, if there were more stringent checks of quality and hygiene to make sure it's safe to eat. The Indian government plans to do to just that. New food safety laws that were adopted 5 years ago finally went into place earlier this month. The new standards for licensing and monitoring of food production in India from local dairies to roadside food stalls aim to improve safety standards and enforcement across the country. Even with the potential of increased scrutiny, Abishek Jain, whose family has run a small sweet stand for more than 150 years, says the new rules aren't a problem. "My great grandfather always maintained a very good hygiene level, so we've always been following that since the very beginning," says Jain. "Its absolutely fair, they should implement these laws as soon as possible. We're already following the rules so how can they ask us to change anything." But there are many who may be forced to change their ways and it's a change that's much needed, says Savvy Soumya Misra, a specialist in food safety at the Centre for Science and Environment in New Delhi. "In India you take the Indian consumer for granted, but you go out of your way to ensure that whatever you're exporting is absolutely world class," says Misra. "So it has to be understood, that whatever Indians are consuming also should be good standard food and not just any food." On a side street, Ajai Kashyap, operates a rickety green food cart. Every day for the last 40 years, his family has served a chickpea snack at the same corner. He says the new regulations won't change how he does business in the street because — just by chance — government officials already eat at his cart. "They want to check quality of the food and they eat here," he says. "If we make bad food, they will just remove our shop for them without asking any questions." But the inspections are set to get more rigorous than the occasional taste test. Some street food stalls, like Abishek Jain's sweet stand, test their food regularly in a lab to make sure it's safe. But that's not the case everywhere else. Inspecting and enforcing the new rules, however, is a tall order and a potentially long process, says Samir Kuckreja, President of the National Restaurant Association of India. "It's a herculean task and it'll take a while to start covering all of the roadside and unorganized vendors because India is full of that," he says. "That's the culture in India, but hopefully it will lead to implementation, better health and hygiene standards." Rising expectations of customers has already improved standards in the country though. But for Ashutosh Chadha, who devours a heaping plate at Ajai Kashyap's cart, the government's fears are unnecessary. "In Delhi, street food is really good. Why do we need a regulator for that?" he says. "We don't need a regulator to tell us what to avoid and what to eat. There comes a point in life when doctors will tell you not to eat many things, so enjoy life when you can."