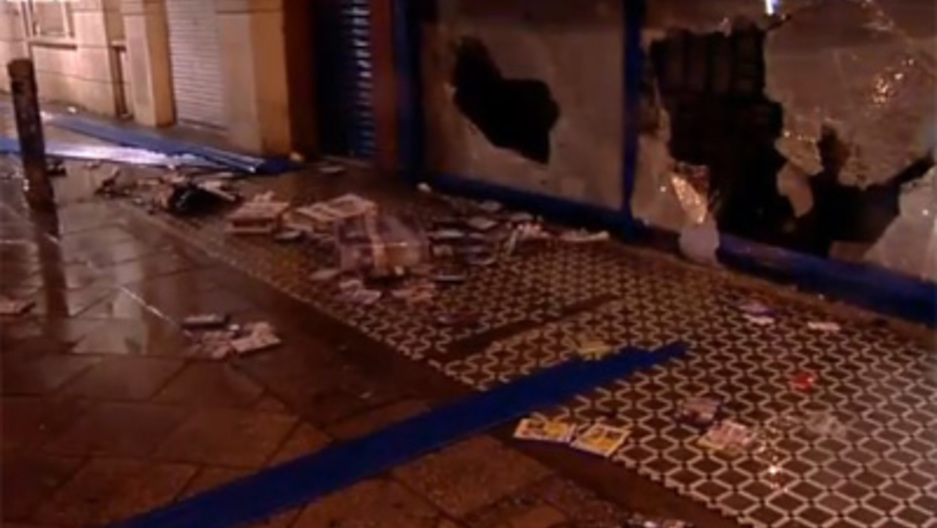 Share
Justice is being delivered at a breakneck pace in English courts two weeks after riots shook the nation. More than 1,000 people have been charged. Many have already entered guilty pleas but now some are judging the judges as they pass sentence on the rioters. Night and day, including weekends, the accused have streamed into courts across England. For some who plead guilty, sentencing has been swift. David Beswick was given an 18-month jail sentence for handling a television stolen by someone else. His friend, Tony Whitaker, said that is unfair, since other people facing the same charges received milder sentences. "He's accepted that, guilty plea straight away and he's still got 18 months. Now you look at other people with the same, none of them got eighteen months. He's a working person," Whitaker said. Prosecutor Nazir Afzal said if people decided to join in on the looting and the violence, they better be ready to pay the price. "One of those people said that he did it because everybody else was. Well, he'll be paying the same penalty that everybody else will," Afzal said. "The message today is clear — stealing, looting, handling stolen property is against the law and there are consequences." Everyone seems to agree that those who took part in the riots must be punished, but some are concerned that justice is being sacrificed in a rush to judgment. Much of the focus is on three so called Facebook crimes. Two young men and a teenager — who don't know each other — posted separate messages on the social network, encouraging people to riot. The teenager has been banned from using social networking sites for a year and given a three-month curfew. The two men expected tougher penalties in adult court, but they weren't expecting four years in prison. Rebecca Tanner, the lawyer for one of the young men, said her client was unprepared. "Obviously, as a 22 year old, knowing that ultimately whilst he'd been extremely foolish, I think he was shocked, given that his view would be he hadn't actually caused any physical hurt or physical harm, or caused any damage as a result of his actions," Tanner said. Senior police officer Phil Thompson of the Cheshire police force said that isn't an excuse. "If they had succeeded in their criminal intention, many other people would have engaged in crime and how many hundreds if not millions of pounds worth of damage would have been caused if their intentions would have been carried through? Not just damage to property potential damage to life," he said. There are other examples of apparent inconsistencies. Last week, one man was sentenced to a day in jail for stealing two t-shirts. At the same courthouse, in north London, another was sentenced to six months for taking $5.00 worth of bottled water. Vicki Helyar-Cardwell of the Criminal Justice Alliance said there are valid reasons to hand down tougher sentences to rioters, but she worries some judges are going too far. "And we are concerned that the sentencing guidelines, which essentially exist to provide proportionality and consistency in sentencing across the country, are sort of being jettisoned at the moment and we have serious concerns about that. They are there for a reason," Helyar-Cardwell said. Still, the judges handing down stiff sentences have the support of Prime Minister David Cameron. "What happened on our streets was absolutely appalling behavior and to send a very clear message that it is wrong and wont be tolerated is what our criminal justice system should be doing," said Cameron. There is still a potent mix of emotions — anger, worry and resentment — swirling around the country. The government has responded with a harsh line: threatening to evict whole families from public housing if one member is convicted or cutting off government benefits. In this atmosphere, many expect judges to deliver justice swiftly and with a firm hand. For some, that has meant harsh sentences, but also a near certainty that these rulings will be appealed in the months to come.