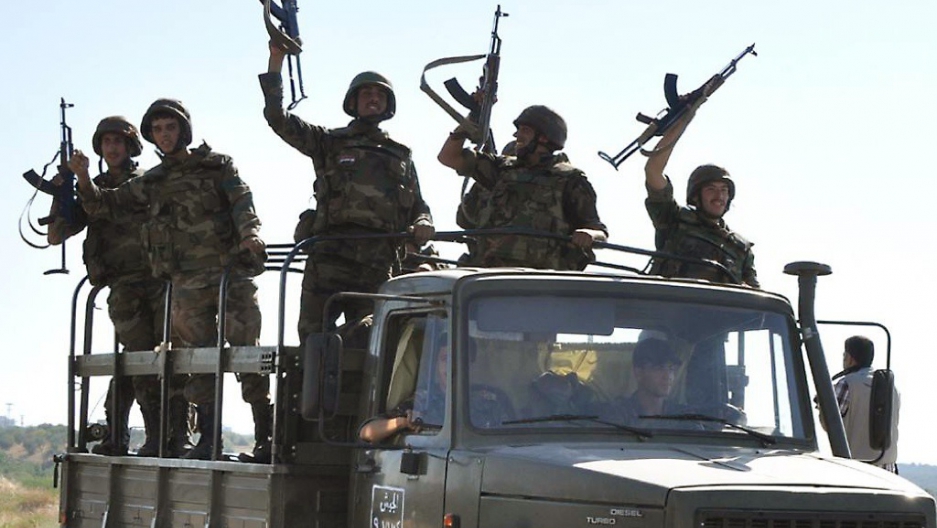 Syrian soldiers shout slogans in support of Syrian President Bashar al-Assad as they sit in the back of an army lorry on Aug. 10, 2011, as they withdrew from the city of Hama after a 10-day military operation to quell pro-democracy protests.
Credit: -
Share

BEIRUT, Lebanon and HAMA, Syria — In the city that defied the dictator, fire engines are washing the bloodstains off the street. Bodies that lay for days uncollected and rotting in the intense August sun have all disappeared.

Freed from the iron grip of the security forces, Hama’s people had made history for a month, coming together for the largest ever mass protests against the Assad family’s 41-year dictatorship.

For the past fortnight, an older story has revisited itself on the mainly Sunni conservative population of Syria’s fourth largest city.

Like the father from whom he inherited power, Syrian President Bashar al-Assad sent tanks to shell Hama. In 1982, Hafez al-Assad ordered a military assault on the city to crush an armed rebellion by the Muslim Brotherhood, killing between 20,000 and 30,000 people.

A generation on, since July 31 Hama’s residents have been bombed, shot, stabbed and looted by Assad’s security forces for having turned out in massive numbers for peaceful, often joyous rallies, filling the city’s central squares week after week with colorful flags, posters and chants calling for freedom and an end to oppression.

GlobalPost in Damascus: A Syrian soldier tells it like it is

A reporter working with GlobalPost who visited Hama last week described it looking as if there had been “a real war for weeks, not a 10-day military operation.”

The tanks that had briefly withdrawn, to allow the Turkish ambassador to visit the “liberated” city and journalists from Russian and Chinese media — the two nations still blocking any binding U.N. resolution against Syria — to witness the “acts of sabotage” perpetrated by “armed terrorist groups,” were rumbling back in.

The flag has now been torn down and replaced with graffiti on main streets, witnessed by a reporter for Time, declaring “there is no God but Bashar,” a slur considered blasphemous and deeply offensive by many of Hama’s religiously conservative Sunnis.

Another scrawl left by soldiers and security forces read “God Bashar and Maher Mohammed,” which referred to Assad’s younger brother Maher, the commander of the Fourth Division who is responsible for many of the now-confirmed 2,000 civilian deaths. Several hundred members of the security forces have also died in the six-month uprising and crackdown.

But though the fire engines hosed down the streets, there was no disguising the dozens of burned out cars and buses, nor the buildings charred by fires after being shelled.

“I cannot forget what Hafez al-Assad’s forces did in my city and against my family,” Abu Safwan, a 41-year-old state employee, told GlobalPost.

“I was 12 years old when my uncle and two of his sons were killed and all of my mother’s brothers ran away to Jordan and Saudi Arabia, afraid of being arrested and charged with belonging to the Muslim Brotherhood […] What is going on in Syria today is the result of five decades of dictatorship and one-party rule.”

Abu Safwan’s neighborhood of Hader was one of the heaviest hit during the initial bombardment launched on July 31, just as Ramadan, the Muslim holy month of fasting was about to begin.

More from GlobalPost: Who are Syria's security forces?

“I couldn’t leave my house for the first six days. For four days we were without electricity, water and phones,” he told GlobalPost. “We were living under heavy gunfire. I don’t want to remember those days. I closed all our doors and windows. We felt like we were living in a tomb.”

As the tanks advanced, women and children were led down to cellars while young men tried to defend their streets with makeshift barricades.

“We built the barriers to try and keep them out of our street,” said a 23-year-old trainee doctor. “We knew they wouldn’t, but we tried. We know we can’t stop tanks with stones.”

Later on, helping his father treat casualties at the Horany hospital, the young doctor would see the corpses of two young men who tried to stand their ground as Assad’s tanks rolled over them and their flimsy barricades.

In another neighborhood of the city, an activist known as Sameh al-Hamwi, the name people from Hama give themselves, described how his elderly mother had begun calling out to God as the shells exploded outside, while his brother’s wife fainted with fear.

“It was fear and confusion,” said Hamwi. “We couldn’t think what to do. I expected them to bomb my house. I spent 48 hours sitting continuously working on my computer contacting people to get the latest news from different parts of Hama. I fell asleep at the keyboard and remember the pain in my back when I woke up.”

At least 54 people were confirmed killed by security forces on that first day of the assault, with a further 160 injured. Four days later, the daily death toll had doubled to 109. Overall, activists estimate between 200 and 300 people were killed in the 10-day assault, but an exact figure has yet to be established due to the ongoing security restrictions.

A local member of the Syrian activist network said around 1,300 people had been arrested in Hama over the past fortnight.

As the tanks rolled in, snipers took to the rooftops, like they had in Daraa in March, operating a shoot to kill policy.

GlobalPost in Daraa, Syria: How it all began

Three young men running to the Horany hospital, apparently answering a call from mosques to donate blood, were shot and killed by snipers in front of the young doctor.

Tanks were deployed in front of Horany and the city’s other main hospital Bader. Short on supplies and with electricity failing, several newborn babies died in their incubators in Rayes hospital, according to reporting by Avaaz, the global campaign group that has citizen journalists working in Hama.

In just two days, Hama had been transformed into a war zone with Russian-made military trucks and green buses carrying thousands of soldiers and security personnel to man the dozens of new checkpoints set up to divide Hama’s neighborhoods.

Passing from one area of the city to the next was “as if I was going to another country,” said GlobalPost’s reporter, such were the number of checkpoints. Many thousands of Hamwis fled the onslaught. A conservative estimate by an Avaaz citizen journalist put the figure at 5,000. Other activists put it much higher.

Shops were shuttered and streets deserted. Families survived on food they had stocked at home and on offerings smuggled in from surrounding villages.

When they could get the bodies of their loved ones, families were forced to bury them in public gardens, being unable to reach the main cemetery due to shelling and snipers.

Avaaz and other rights groups are now investigating the disappearance of scores of bodies, including at least 50 from a mosque in Assi Square. Avaaz citizen journalists have reported the presence of at least three mass graves in Hama since the assault began.

When they could no longer terrorize residents on the streets, gangs of shabiha thugs, alongside plain clothes secret police, came breaking through doors, beating families in their homes before stealing gold, money and television sets.

“I had a big stick in case the shabiha came,” said the young doctor. “They can kill anyone, steal anything and maybe even rape the girls. So I couldn’t leave my family.”

The young doctor was lucky not to have his door beaten down, but one young man, at home with his mother, was burned seven times with cigarettes and had his nose broken by regime thugs.

The regime’s violent assault certainly cleared the streets, at least temporarily, but among Hamwis who spoke to GlobalPost’s reporter in the privacy of their homes, there was only a strengthening of resolve.

“I am a simple man and not interested in politics,” said Yousef, a 30-year-old shopkeeper. “But I cannot see my people killed and do nothing. My cousin was killed two months ago by a shot in his head. I cannot say this is not my business.”

Yousef used his small delivery van to ferry food and medical supplies from surrounding villages to his neighbors in Hama’s Talaat al-Gizdan district during the worst days of the assault. With the bombardment largely over, Yousef and his neighbours took to the streets late at night, after breaking their Ramadan fast.

“It was a small demonstration but it was symbolic,” he said. “It showed that Hama people will continue their democratic uprising, whatever the army did or will do.”

And last Friday, as they did in Daraa, Jisr al-Shughour, Banias and Lattakia, where the regime launched military assaults to crush protestors, Hamwis emerged from their homes, in their thousands rather than hundreds of thousands, yet unbowed to be met, again, with bullets.

A reporter in Hama, Syria contributed to this report.