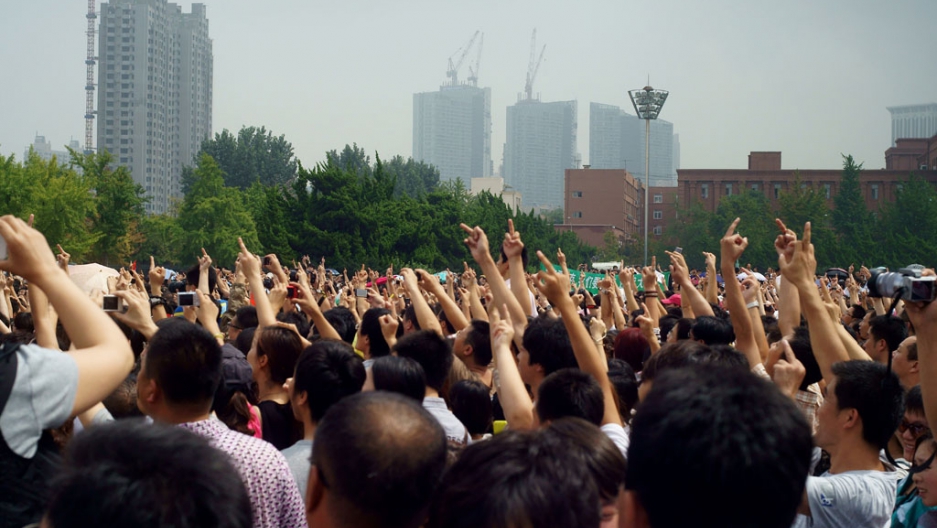 Chinese protesters demonstrate against the building of the Fujia chemical plant in Dalian, in northeast China's Liaoning province on Aug. 14, 2011.
Credit: Stringer
Share

BEIJING, China — In a widely watched case where the government yielded to demands of protesters, China’s northeastern city of Dalian has ordered a controversial chemical plant to shut down and move elsewhere.

The announcement follows a raucous weekend over which estimated tens of thousands of Dalian residents took to the streets to voice their concerns about the plant, which manufactures paraxylene (PX), a combustible, cancer-causing chemical used in making polyester.

“Get out of Dalian, PX! People from all over the country support the action for justice,” said one widely re-tweeted post on Twitter.

Other commenters were more practical, however, noting that moving the plant outside the city only makes it somebody else’s problem. Officials have not yet said where they plan to relocate the company.

And there were reports Monday that the plant was operating normally despite the order to shut down. A source told Reuters the plant was continuing to carry shipments from regular suppliers such as Iran and Papua New Guinea.

Still, Sunday's announcement marks a departure from the majority of protests in China that rarely yield government action of any kind.

The demonstrations began over the weekend, stoked by concerns after a strong typhoon hit the region and breached a sea wall to the city. Demonstrators said they feared a natural disaster could wreak havoc on their city if it damaged the PX plant and exposed residents to the toxic chemical. Officials have said there was no leak at the plant.

Reports indicate the Fujia Petrochemical Company narrowly averted a dangerous chemical spill during the typhoon last week, and as news of the near-miss leaked out, protesters took to the streets.

Chemical spills, leaks, and toxic dumping are somewhat common in China amid the economic boom, and often, small towns that fall victim have little recourse. Dalian may have turned out to be an exception.

Wang Canfa, an environmental law professor and director of the Beijing-based Center for Legal Assistance to Pollution Victims, noted that the Dalian plant was illegal to begin with because it hadn’t passed a mandated environmental assessment.

Wang said that, in fact, Dalian’s protest case is not an isolated victory.

China has somewhere in the neighborhood of 100,000 protests and demonstrations across the country every year. Very few of them yield tangible results. Yet Dalian’s example is strikingly similar to that of Xiamen, another up-and-coming, moderately wealthy seaport city that blocked the construction of a PX plant with mass demonstrations several years ago. What those two situations seem to have in common is a large number of white-collar workers, rather than poor farmers or migrants, voicing their concerns about health and safety.

GlobalPost in Beijing: How China silences its fiercest critics

State-run news media reported that the protests were mostly peaceful, though there were a few scuffles throughout the weekend. And there were scattered reports that several protesters had been arrested, and the key words regarding the protests were being censored from China’s popular Weibo micro-blogging platform. Chinese journalists were turned away from the protest scene, and by Monday, all protests had been reportedly dispersed.

The China Daily newspaper said Dalian's Party chief Tang Jun and Mayor Li Wancai addressed the crowds and said the plant would be moved, but gave no timetable for the relocation nor did they discuss the new location for the plant.

Xiamen and Dalian are by no means alone in housing PX plants in China. The widely used chemical is produced in many cities here, but these two particular places now have reacted with particular ire over its manufacture.

Wang noted that the plants will have to be set up somewhere, but local governments must follow China’s strict environmental regulations in building manufacturing centers.

“As long as [the] location selection process is scientific and legal, and protection measures are taken, it's OK,” he said. “It's impossible to not have chemical plants.”