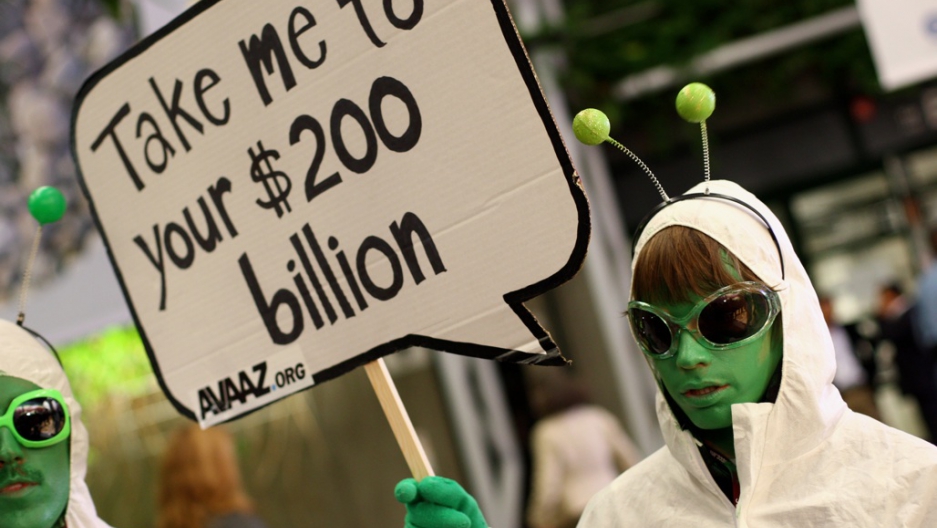 A protestor dressed like an alien holds a banner during the United Nations Climate Change Conference 2009 on December 8, 2009 in Copenhagen, Denmark.
Credit: Miguel Villagran
Share

When you're a Nobel Prize-winning economist, you get a lot of leeway.

That was clearly the case today when Paul Krugman crafted a logical and out-of-this-world argument for greater government spending.

Fareed Zakaria: Wouldn't John Maynard Keynes say that if you could employ people to dig a ditch and then fill it up again, that's fine, they're being productively employed, they'll pay taxes, so maybe the bigger - maybe Boston's big dig was just fine after all.

Paul Krugman: Think about World War 2. That was not - that was actually negative social product spending, and yet, it brought us out. I mean, probably because you want to put these things together, if we say, look, we could use some inflation. Ken and I are both saying that, which is, of course, anathema to a lot of people in Washington but is, in fact, what basic logic says. It's very hard to get inflation in a depressed economy. But if you had a program of government spending plus an expansionary policy by the Fed, you could get that. So, if you think about using all of these things together, you could accomplish a great deal. If we discovered that space aliens were planning to attack and we needed a massive buildup to counter the space alien threat and really inflation and budget deficits took secondary place to that, this slump would be over in 18 months. And then if we discovered, oops, we made a mistake, there aren't any aliens, we'd be a better –

Ken Rogoff: And we need Orson Welles, is what you're saying.

Paul Krugman: No, that's a – there was a "Twilight Zone" episode like this in which scientists fake an alien threat in order to achieve world peace. Well, this time, we don't need it - we need it in order to get some fiscal stimulus.

Hat tip to our friends at the great Global Public Square blog at CNN.com.