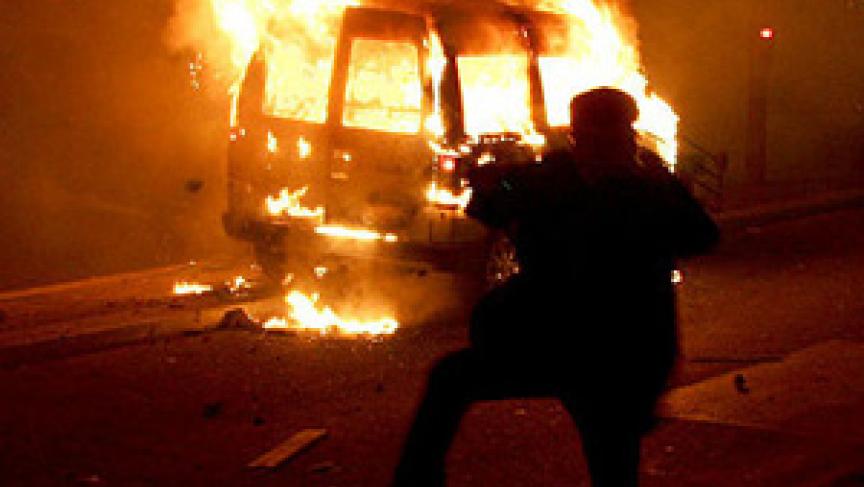 Demonstrations and riots in Paris, France, May 6, 2007, following the election of Nicolas Sarkozy to the presidency of the French republic. (Photo: Mikael Marguerie)

Norway has been vigorously defending its multicultural model, after the twin attacks last month. The confessed attacker, Anders Behring Breivik, said he killed to stop what he called “the Muslimization” of Europe.

The concept of multiculturalism means different things in different places. And it has been under scrutiny in many of them, especially around Europe.

For countries like the UK, Germany and the Netherlands multiculturalism has meant allowing different cultures to co-exist and flourish within the national framework.

But the French have never promoted that idea. Instead it has sought to assimilate new arrivals.

Since Norway’s July 24th attacks by a right-wing anti-Muslim extremist, Prime Minister Jens Stoltenberg has sought to assure the world that Norway will not sacrifice its liberal attitude, even toward immigrants.

He said Norway has conflicts and extreme people, and the country has seen violence before, but never on the scale of what Breivik perpetrated.

“And of course, we will learn, we will in some ways change,” Stoltenberg said. “But I will do whatever I can to make sure that we do not change in a way which undermines our core values of openness, democracy and participation.”

No doubt any elected leader would make the same stand under the same circumstances. But the fact is that for months now European heads-of-state have been openly questioning the wisdom of multiculturalism, a mainstay of European social policy for decades.

“In the UK, for example, the fact that you would have Pakistani or Indian ghettos was part of the system, in a way,” said Haski. “They were allowed to prosper and develop with their own core identity. Within the British society. This was never the French approach.”

What is the French approach? That if you’re born in France, you are French. Full stop.

Jonathan Laurence is a professor at Boston College and author of the book, “The Emancipation of Europe’s Muslims.”

He said unlike France, most of Western Europe, the Netherlands, Germany and the UK for example, didn’t demand that minorities assimilate.

“In parts of western Europe, there was less concern about whether these communities were fitting in with national identity. This was in part out of a desire to avoid imposing any nationalist template over them,” Laurence said. “We have to remember that nationalism really was a dirty word for the second half of the twentieth century since it was seen as the prime aggravator and cause of the world wars that tore Europe asunder.”

France, on the other hand, has held up the national identity of liberty, fraternity, and equality as an ideal for centuries. Its policy of assimilation continues today, and in some sense it is working.

Take Kadija Tighanimine, a twenty-something French blogger of Moroccan descent. She was born in France, but her family came over a century ago. She’s Muslim, wears a headscarf, but said people like her feel far removed from the current debate over multiculturalism.

“Because we just feel naturally French. We don’t even pose the question of identity, Tighanimine said. “We’re not just people from Africa, we’re French of several generations. I don’t think the people like me are schizophrenic about their identities. People know very well that they are Western, European.”

Tighanimine may feel as French as anyone else. But the fact remains that she is a member of France’s largest minority, Muslims of North African origin. And for more than half a century most of them have lived isolated from mainstream French society. Living in the suburbs around major cities. The result: a sort of accidental multiculturalism.

One of those suburbs is Bondy, north of Paris.

Frenchman Nordine Nabili runs a popular online journalism project there for young people, called the Bondy Blog. He said when president Sarkozy disparages multiculturalism, what he hears is an official rejection of Muslims.

“France wants other cultures; say from Eastern Europe, because there’s this common link: Christianity. So the problem here is religious,” Nabili declared.

What he meant is religious intolerance. Nabili said Muslims are unfairly accused of not accepting the core French values. He said that’s just plain false.

“Do I treat people equally, in terms of my family, the education of my sons and daughters, the young people I work with here?” Nabili asked. “Yes. Am I fraternal? Yes. I run the Bondy Blog on my own time, and I don’t ask anyone for money for it. If France itself really embraced these values, you and I wouldn’t have to sit here and talk about discrimination.”

European polls, and voting patterns, show there is a rightward trend underway in France and across Europe. Christine Tasin is founder of the grassroots, Republican Defense party. Her blog has some 90,000 subscribers. She said Islam is simply incompatible with democratic traditions such as the separation of church and state.

“We’re asking of the Muslims what Napoleon asked of the Jews,” she said. “To abolish any religious norms that are not compatible with the laws of and values of the Republic. And the Jews did it. So did the protestants, in 1791. But actually this is impossible with Islam, she said, because Islam states that the Koran is the word of God and therefore it cannot be altered.”

While Tasin doesn’t condone violence, her kind of rhetoric is being used by extremists like Norwegian attacker Anders Behring Breivik to justify their actions.

Whether or not this kind of talk is leading to violence, Muslims say it’s just flat out wrong. And they complain that this way of thinking backs them into a corner, leaving them no way to prove their allegiance to the countries where they live.