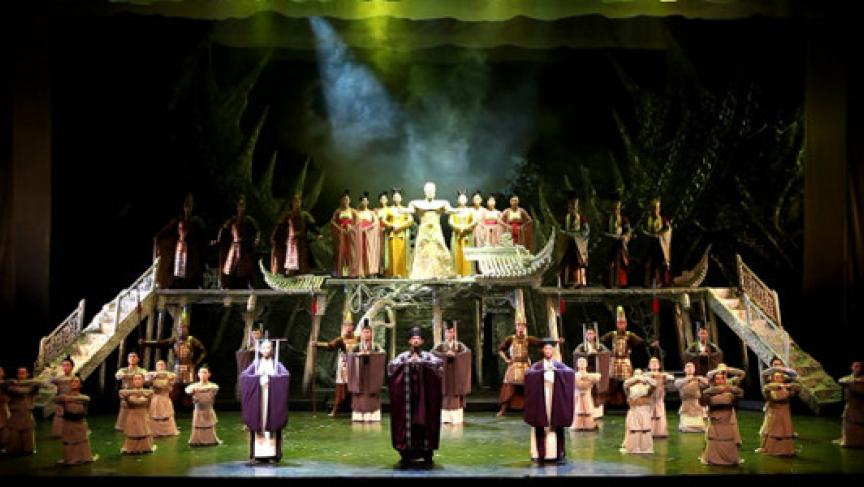 Share
By Maria Bakkalapulo The Fringe Festival in Edinburgh, Scotland, kicked off this past weekend. For over 50 years, the city has hosted what is the world's largest arts festival. This year 2,542 shows are running, employing around 21,000 performers. The city's Usher Hall plays host to international debut of Qing Cheng — 'green mountain' — an elaborate, large-scale multimedia Chinese opera set in the period of the Tang Dynasty with an ancient story of love spanning a thousand years. Maria Bakkalapulo was there for the debut. Qing Cheng begins with the innocent and distraught Princess Jade heading to the summit of ancient Mount Qingcheng Shan to find a cure for her mother's illness. The opera is set in the Sichuan province of China, where a deadly earthquake on May 12, 2008 killed more than 65,000 people. Producer Lu Xinli was inspired to make this opera as a kind of catharsis. "I went to Dujiangyan soon after the earthquake to find friends there. So, I saw the devastation. It was very sad, I shed many tears there. I also watched the reconstruction of the city too. The progress was so fast," says Xinli. "A city's rebuilding should not be restricted to the infrastructure. It should have something more spiritual. Because this area is a historical place, a spiritual placed, it was very easy for me." Mount Qingcheng Shan in Dujiangyan is a UNESCO World Heritage Site and famously home to the giant panda. It's also sacred to the religion of Taoism. The central concept in Taoism, the opposing forces of Yin and Yang was a natural theme for Lu Xinli, along with musical elements and Tai Chi. In the opera, the Taoist "In scene four, Prince Murong, the male lead role, has gone to the immortal world to practice Tao with Master Qingcheng for three years," explains director, Chen Wei. "The Princess Jade is left behind in the mortal world. Through practice, Prince Murong works through his hatred towards the Emperor for murdering his family and the love with Princess Jade is eternal, it is forever there." This is the largest production ever staged at The Fringe Festival. 50 % of the concert hall's floor seats were removed for the stage. There are some interesting production techniques. The fairytale-like set features trees and flowers, plants and creatures that are actually dancers in stunning costumes created by Tim Yip, the Oscar-winning designer for "Crouching Tiger, Hidden Dragon." Instead of sneaking around in the dark, crew members hide under large stage props, pushing them to and fro around the actors. Russel Payne, the stage manager for the opera, says the truly amazing aspect of this production is the mix of stage scenery with video projections. "What the projection element adds is the ability for a lot more vivid colors. You can control it with the lighting. You can also add movement so you can almost get a cine-graphic feel to it and what this show has done is it's added projection on multiple layers, so that you can actually over lay video from behind and on front so you can give the impression of someone flying, journeying through mountains." Using that technique on such a grand scale is a first for a Chinese opera. But the artistic inspiration for the design is more conventional, taken from traditional Chinese landscapes. Back in China, a permanent theatre is being built in Dujiangyan to house the production. But before then, the team hopes Qing Cheng will draw a lot of interest worldwide. "We hope it can tour around Europe, U.S. S. E. Asia, the far east like Korea and Japan, before it is placed into that permanent theater," says the opera's project manager James Wee Tee. "They want to show the world that this is how Chinese people think, Introduce to the west and the rest of the world how Chinese live."