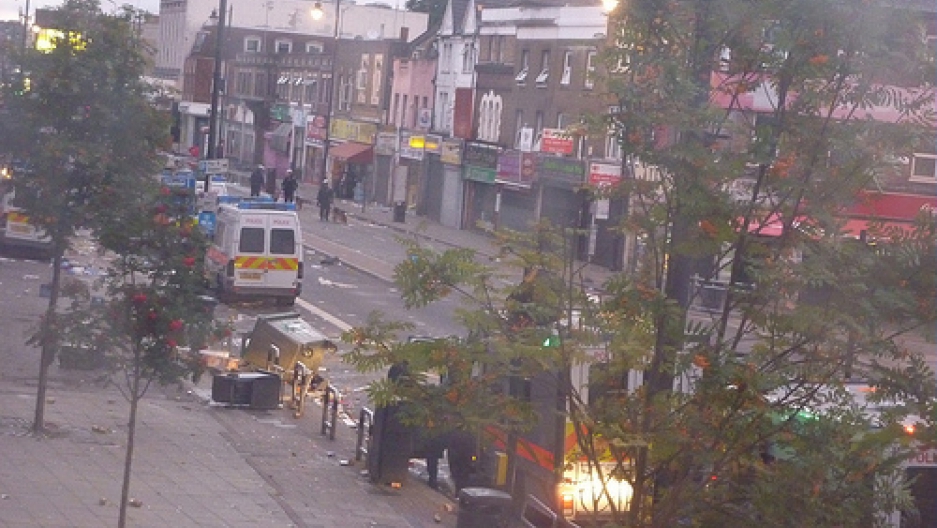 The aftermath of the Tottenham riots.(Image by Flickr user vic15 (cc))

Rioting in London was sparked by a police incident on Thursday night in the neighborhood of Tottenham, where police shot and killed local resident Mark Duggan. In response, about 200 residents organized a march on Saturday in front of a local police station. Clashes with police and demonstrators escalated and protests went from peaceful to violent.

Rioters took to the streets, setting nearly 49 fires to buildings, busses and police vehicles. The looting and violence left at least 35 police officers injured, and resulted in the arrests of more than 100 people.

"I think it's sick what they've done just over a shooting," a Tottenham resident told the BBC. "They've just took it too far ... This is stupid and there's people who have to live here."

Sporadic copy-cat riots have sparked up across different neighborhoods in London and have been loosely organized through social media.

"People were saying on Twitter, on Facebook: get down to Brixton and riot," reported Jason Rosam, London correspondent for the BBC.

Both London's Mayor Boris Johnson and England's Prime Minister David Cameron are away on vacation. It is uncertain if they will return to address this issue. Many are worried about the effects this will have on the city's image when they host the upcoming Summer Olympics.

The Associated Press' video coverage of the riots.