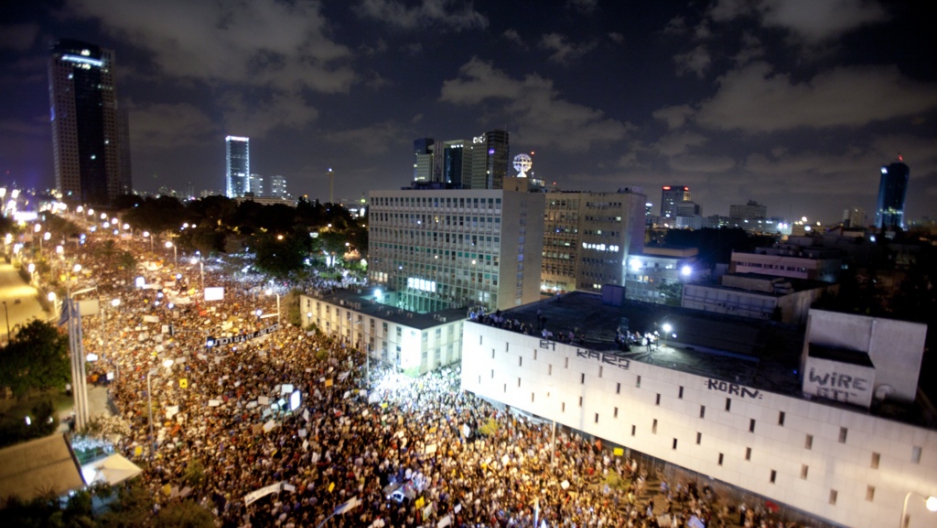 Hundreds of thousands of people march in the streets of Tel Aviv, Israel on Aug. 6, 2011,
Credit: Uriel Sinai
Share

TEL AVIV, Israel — Massive protests centered on rental prices and scarce public housing continue to roil Israel as the movement rolled into its fourth week. This weekend saw the largest demonstrations yet.

Police said about 320,000 people took to the nation’s streets Saturday night demanding an end to government collusion with special interests, increased public housing and an era of social justice. A quarter of a million people blocked off the streets of Tel Aviv, a city of about 1.2 million inhabitants. Protests took place in fifteen Israeli cities.

A spokesman for Prime Minister Benjamin Netanyahu, whose Jerusalem residence was surrounded by about 30,000 protesters Saturday night, had spent much of the weekend issuing statements diminishing the significance of the protests and tamping down figures of expected participants.

After the protests Saturday night, the primine minister and his spokesman found themselves after the fact accusing the media of inflating the number of demonstrators.

GlobalPost in Tel Aviv: Israel's citizenry seems to have blown a collective fuse

Protest leaders appear to have hit a new stride at the end of three weeks of what had previously been occasional and ragged actions. Both in Jerusalem and in Tel Aviv the marches started at 9 p.m., an hour later than previous rallies, so as to include religious Jews who would have had to arrive at protest sites after the end of the Sabbath. In both cities, the rallies for the first time included Arab speakers and those representing the religious sector among those addressing the crowds.

In Jerusalem, the Israeli Arabic writer and Ha’aretz newspaper columnist Sayed Kashua addressed a fervent, steadfast mass of people. The crowd roared when he uttered the words “people like us” referring, without ethnic distinction, to hardworking young families, and forced him to repeat the line. “People like us, who send high-achieving young children to mediocre schools,” he finally finished.

On the eve of negotiations with the government, which has been maladroit in addressing the protesters and the ever-growing expanse of tent cities taking over Israel’s urban centers, movement leaders appear to have found a forceful collective voice. In Jerusalem, as in Tel Aviv, youthful social action organizers referred to their movement as one harking back to the collectivism and social justice that characterized the establishment of the state, in 1948.

In what may prove a shrewd move intended to forestall criticism that the movement has been tainted by a politicized, left-leaning, anti-Netanyahu tone, the Jerusalem protests started out with the voice of David Ben Gurion, the state’s founder and first prime minister, declaiming Israel’s declaration of independence.

At the same rally, Hebrew University student government president Roy Butler addressed “those who tried to sow differences between us in recent days,” referring, it appeared, to government spokesmen, and announced “we are unified, we are patient and we are ready for a long, drawn-out strike.”
He called for “a new covenant between the nation and its people.”

Signs at the rally included many depicting Gilad Shalit, the Israeli soldier kidnapped and held in Gaza by Hamas for the past 5 years, and several with the words “Egypt has arrived.”

Another sign held aloft stated, “The kid is 30 years old. He lives with dad and mom,” a line borrowed from a popular song and now, at these rallies, adorned with new meaning.

Rabbi Benjamin Lau, an orthodox rabbi with a large secular following and the son of Israel’s former chief rabbi, took to the stage in Tel Aviv and said “this protest does not belong only to one sector of society. It belongs to all of us.”

Major music super stars appeared at the rallies, including the legendary Shlomo Artzi and Judith Ravitz. While the crowds tended toward youth, many multi-generational families could be seen, and many young parents with strollers.

At about midnight, as the rallies came to a close, protest leaders described themselves as “euphoric.” Many had cast doubts about their ability to gain on last Saturday’s rallies, in which 150,000 people took to the streets, and the masses that turned out tonight are seen as a notable sign of maturity and organizational prowess for the young and still fairly spontaneous movement.

P2, a popular pizzeria down the street from Paris Square, where the Jerusalem march had gathered, ran out of dough at about midnight. “The people demand dough!” one young man said, in a cajoling tone of voice.

“Next week we’ll be 600,000,” promised the exhausted pizzaiola working the oven.