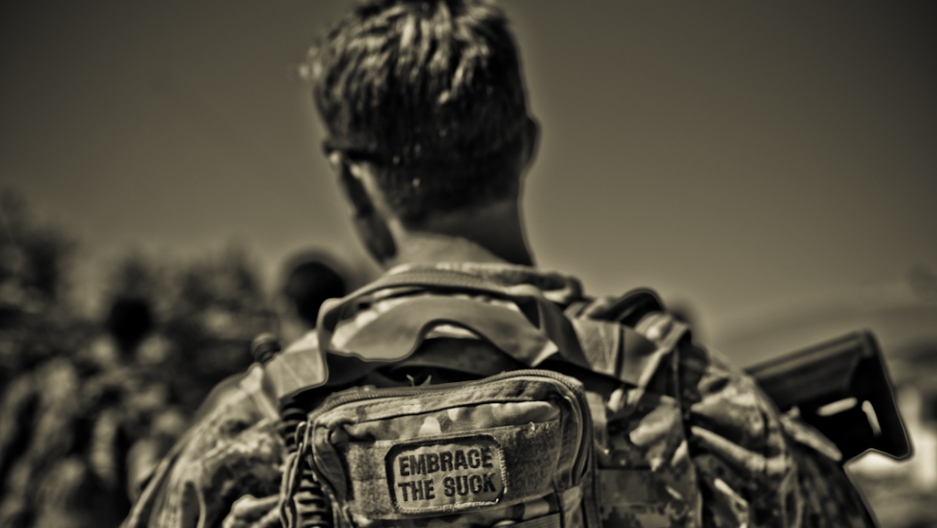 Does this soldier's patch imply that he is undisciplined?
Credit: Ben Brody
Share

When I go to Afghanistan, I always travel to remote outposts, usually manned by a single U.S. infantry platoon or less. These are the war's "friction points" — where policy is put into action.

At bigger bases, there are plenty of people who talk about how the war is being fought, but there is little physical evidence beyond the endless powerpoint "storyboards" that come in from the far-flung platoons.

Often the officers at larger bases have a good sense of what is going on in their district, but sometimes they do not, or have unrealistic expectations about their ability to change Afghanistan.

GlobalPost in Zhari: On board with the rescue crews in Afghanistan

During my first tour in Iraq, when I was a soldier in Baghdad in 2005, our brigade commander told us that we would defeat the insurgency to the point that no follow-on unit would be required to operate there after our year-long tour was over. In an anarchic city of seven million, we were 4,000 soldiers trained to fight the Soviets on the Eurasian steppe.

The experience taught me that to find the story of the U.S. military at war, you have to find the friction points, and stay away from powerpoint presentations and starry-eyed brigade commanders.

Jumping from outpost to outpost is difficult logistically — last year I waited two weeks for a flight to Combat Outpost Mizan that never came. A few months later I tried again, succeeded after a week of waiting, and came away with a nuanced story about the viability of counterinsurgency doctrine in Zabul Province. The highest ranking soldiers I talked to were a captain and a platoon sergeant.

These soldiers at an austere combat outpost are out of uniform. Does that mean they should be punished by their commander, who works out of an air-conditioned office?

Although I travel to these austere outposts to try and show what it is really like for soldiers and Afghans at the friction points, it is difficult to do so without getting the soldiers in trouble with their commanders and sergeants major sitting in air-conditioned offices back at the big bases.

The commanders do not see a story about their men working hard under difficult conditions. They see someone with his T-shirt untucked or wearing the wrong sunglasses. They see an unauthorized patch. When I see a photograph of a soldier in perfect regulation combat kit, with no aftermarket pouches or accoutrements, to me the picture looks staged, like an advertisement.

GlobalPost in Kandahar: Caught in the crosshairs

After I left, I heard the soldiers at Mizan got in a lot of trouble because one of my photographs showed a guy wearing a patch that said "Embrace the Suck." Never mind that the story was about them successfully fighting off a vicious ambush high in the mountains.

The fact is, no one wears "proper uniform" out at these places where the war is fought. T-shirts and ballcaps are the norm, sometimes during firefights. Soldiers wear patches on their armor that say "Major League Infidel" or "Head Motherfucker In Charge."

Sometimes they ride in unarmored pickup trucks because their 15-ton Mine-Resistant Ambush-Protected trucks are broken down from lack of parts or too heavy for the narrow mountain paths. Soldiers improvise, and regulations be damned.

Yet soldiers do these forbidden things while remaining effective and professional. I have spent time with countless small units in the last eight years and have found no connection between their uniform standards and their professionalism.

According to squad leaders and platoon sergeants, relaxed uniform standards are an important morale boost when soldiers are spending a year in some tiny outpost in the mountains, fighting vicious battles, pooping in bags, eating the same lousy menu over and over, losing their friends to rocket attacks, getting 10 percent of their mail once a month, and not having any time to themselves.