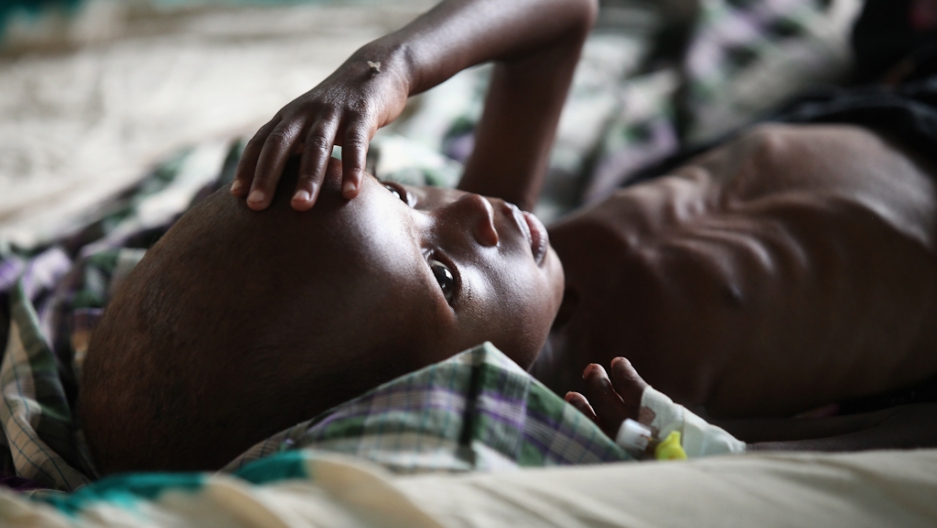 A malnourished refugee child lays in a ward of the Medecins Sans Frontieres Hospital in the Dagahaley refugee camp which makes up part of the giant Dadaab refugee settlement on July 22, 2011 in Dadaab, Kenya.
Credit: Oli Scarff
Share
Related Stories:

Somalia's famine has already killed tens of thousands of people and is expected to spread across the south of the country in the coming weeks as a lack of rain and a lack of political will have combined to create a massive humanitarian catastrophe, threatening millions of lives.

The Horn of Africa region has been parched by the worst drought in 60 years. The United Nations now estimates that 12.4 million people are facing severe food shortages and are in desperate need of aid.

Somalian refugees, fleeing the drought, arrived bedraggled, exhausted and often bereaved in Dadaab, Kenya, where an overcrowded complex of camps, built for 90,000, now houses about 400,000 people. The Somalis arriving at the refugee camps are the lucky ones, however. Many succumbed to exhaustion, dehydration and hunger during the long and brutal trek to get there.

While the United Nations says $2.5 billion is needed to alleviate the suffering, only a little over $1 billion has so far been committed by donor nations.

Listen to an interview with photographer Oli Scarff who was recently at the Dadaab refugee camp: